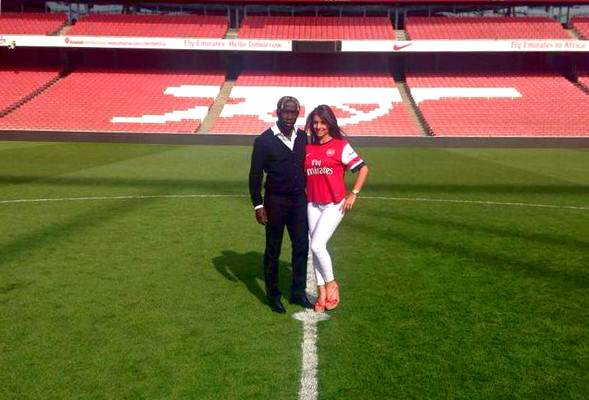 During the match today Stewart Robson said that Arsenal were better at scoring from set plays than they were last year and I thought “no they are not”. So I had a peek at the numbers and sure enough Arsenal have scored just 8 goals from set plays (not counting penalties) this season and just 4 goals off corners. Last season they scored 12 goals off set plays, 4 goals off corners. I suppose Arsenal could score another goal off a corner in our last game and Robson would be right in one small sliver of reality.

Arsenal last scored off a corner against Sunderland in February. 54 corners ago. Arsenal scored 14 goals in the games since Sunderland and just 2 from set plays. 1.3 goals per game and possibly indicative of a need for more concentration on corners and crosses in practice?

However you slice it, Arsenal are absolutely not better at set pieces.

Bacary Sagna, man of the match?

Whoscored.com gave Sagna the man of the match award for his performance today which is interesting because there is no sentiment in their analysis. It’s simply a matter of which player had the best stats.

See you next week…

Leeds 0-0 Arsenal: By The Visuals

Arsenal 0-3 Aston Villa: By The Visuals

Off topic!
But I would love TGSTEL to get a medal when we win the fa cup!

He was in Copenhagen today instead of waving farewell to the Arsenal fans at the Emirates. Says it all really, and yet you want him to receive a medal? He couldn’t care less about this club, and theres many other players who really do deserve a medal for there send off.

How many thumbs up for Bac’s wife?

158 thumbs up Bac’s wife it seems, not putting my thumb in there.

This is why Bac wants to leave.

SO happy to hear “Laurent Koscielny/He wants his own song” after the match.The power of Arseblog. Thanks so much to blogs and all the excellent contributors. This is an amazing community.

Sagna : ” 4th place trophy? Now look at my missus. This is what I call a trophy”

Might want to bear in mind some other statistics :

22 goals in all competitions
16 goals in the PL

Negredo is on 9 goals
Aguero on 17

not bad for a limited striker who spends almost as much time on his hair as Arteta.

And less you say Aguero and Negredo have been injured, well I say to you Wenger finally got something right. Giroud is unbreakable.

Suarez, too, is unbreakable.

plus Suarez can chew his way through the opposition. Even Arteta with his new improved tooth does not provide us this offensive capacity.

why anyone is still talking about this racist punk is beyond me. the NBA showed how to deal with his type recently: lifetiime ban. Him and all these fans throwing bananas.

Yeh but no but, he is Shit, they said so on MOTD 😉

Nice stat there! I would love to see a stat of chances missed in all competitions and conversion rates too plus chances created from nothing or by himself

I also think Giroud is not appreciated for his work, but there’s no need to get carried away. Giroud averages a goal every 194 minutes. Negredo every 191 minutes, which is similar, but Aguero every 84 minutes XP

Thought the same when Robson said that. I mean are Robson or the fact checkers for NBC completely ignorant of a great information source known as the internet that would’ve allowed them to determine the actual facts rather than the misinformed crap coming from Robson’s shit spewing gob? We’re currently 14th in set piece goals and were 8th, 17th, 17th, and 8th the previous four seasons. Very poor to average in total number of set piece goals and given my impression that we probably generate more set pieces than most teams, overall poor in converting set piece goals. Part of… Read more »

That picture makes me so sad. He really is leaving.

I hoped that maybe he was unwilling to sign his contract until Arsene officially signed his. It was always likely he was moving on to something new though. I highly doubt it will be at another PL club though.

It kills me to see Sagna go — even more than Fabregas.

This guy is Arsenal through and through. He deserves better 🙁

Don’t know how to feel about Sagna….
Fantastic servant to the club but my biggest concern are the rumors he is joining another prem club…. players that are ‘Arsenal through and through’ would never leave to go join a direct rival in the league. (Imagine Henry going to ManUre) Hope he does the decent thing and leaves these shores.

Robson is a cunt, don’t listen to him

on a John Terry level! 😉

Only Mourinho is at John Terry’s level

I watch games on Danish television, although I understand some Danish it is pretty easy to let it all roll over you.

Also the Danes are not as stupid, heard them listing all the Arsenal players out injured this year, something most pundits choose to ignore.

how many times has that idiot Robson said that Arteta can’t defend seconds before Arteta takes the ball of someone? I’ve lost count.

Angolan Girl Who Loves The Gunner

Bac had to bring missus. Last home game. We will dearly miss you!

I believe Robson may have set a record today for most inaccuracies per minute. It was one dumb comment after another.

I think he said “more headed goals.” I did not hear anything about set pieces.

1 – THAT pass from Vermaelen

Haha last ever pic of Bac @ Emirates and the bloody cameraman couldn’t even get the thirds on horizontals.

Bac even if you leave emirates leave your missus here please

4- Refusal of Giroud to give through pass to Poldi in the final third.