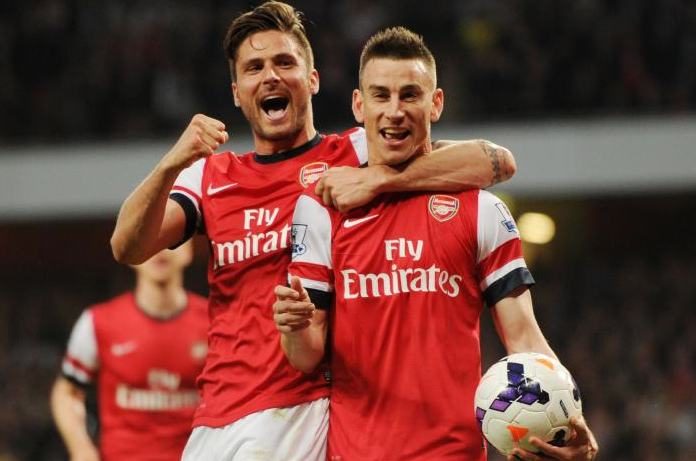 Arsenal have confirmed that Laurent Koscielny has signed a new long-term deal with the club.

The Frenchman has pledged his future to the club, after signing an extension in 2012, and his new deal is expected to run until 2018.

He’s become an integral part of the Arsenal defence alongside Per Mertesacker, and this is great news as big clubs like Bayern Munich, Barcelona and Real Madrid had been sniffing around.

He told the official site, “I am very proud to have reached agreement with the Club on a new contract. I have enjoyed four great years at Arsenal already, and I look forward to continuing to help the team in the years to come.”

While Arsene Wenger said, “Laurent has proven himself to be an outstanding player since joining us in 2010 and has showed his quality once again this season. I am delighted he has decided to commit his future to the club.”

A pre-cup final boost, hopefully, and fantastic news for all Arsenal fans.

Great news. Well done Arsenal for getting the contracts done. I read thats now 7 or 8 this year now, so all good.

Read it was 2019, but good news regardless. Deserves any raise he got. A great player now and will only improve going forward.

Haha, f*ck all those media outlets who were talking about the Koss joining whichever club they could think of at that time.

Just watched a YT video of him. I’ve got to say that he is so good with the ball, so calm, and his pass accuracy must be sky high as well cause he plays wonderful balls out of the defense, even under pressure

3 years ago the headlines would be Xavi “Koscielny plays the Barcelona way”.

3 years ago the headlines would be “Has Arsene turned senile? Signing a Ligue 2 defender over Scott Dann”

Yes! This is such good news. Long reign King Boscielny.

does Koscielny use his penis on the picth? that said, if he can whip it out against the Spuds and tap the ball into the net with it, and the ref allows it, I’d be all for it…I’d even say: let’s have more penis-tapping goals against all these dicks…no way, they could defend against our players whacking the ball off into the net…

Why do you ask my name? It is beyond understanding
Reply to  Up4grabs

He’s gotta get his own song now.

Just realized this works much better for Ozil

Can you believe he has been with us for four years? Damn time has flown by. I remember when we were first linked with him that Blogs kept saying “I can’t remember this guy’s name, I have to copy and paste it all the time.”

Time to sort those lyrics boys. The Koz deserves a worthy song.

Pls. Sagna pls. even if you are not staying, We need you to lift the community shield with us before leaving.

Great news!! He has been immense the last couple of season’s!!

Well we’d better come up with that song before 2018!

Be Koscielny,he is a Gunner (to the tune of Because the night by Patti Smith)
,I am trying to add a couple more lines to make an original song for our gallant,swashbuckling Polish/French defender.
Great news to read he is staying at Arsenal.I hope the club can get Bacary to stay too.

he doesn’t.smile cos he’s the BOSS

and now he has signed a New Deal.

If I close my eyes,I can see us winning many trophies in the future
when I open the eyes the trophies are still there
thanks Koscielny and all the other lads who are believing in us

See what happen when you made him a song

Fantastic news. Can’t have been the only one worried bayern or barca would come in for him this summer.

I think this is the one that proves we have turned a corner, he is legitimately one of the top five centre backs in the world right now.
Great great news for the last second last Friday we shall ever have to hear “bla bla bla amount of years without a trophy”

I like the Bossielny references and that reminded me of an Elvis song that could be used for Kossie.
To the tune of Bossa Nova just using the verse,in place of saying Bossa Nova sing
Koscielny,
Koscielny,
Add a bit of clapping,jumping around a fun to sing rock a hula song.

Time he had a song. After all thats why he is staying 😉

Fuck off Charlie Adam you fat cunt, Koscielny will break your legs.

There’s good defenders, then there is Koscielny.

The Ox is a fox

(To the beat of the Flash Gordon theme song) Kos….. Cielny, not gonna get past him!

This is very good wengernomics.

Per and Kos . Arsene can’t do defenders

With Szcz, Gibbs, Per + Kos we could have a very strong / settled backline for years to come.

Add a quality right-back and that’s a great platform.

What a result, must be a great feeling around the club at present. Who to who to be who to be a GOONER!

Something to the tune of Squeeze Box?

To the tune of “Squeeze Box”

A LEADER and THE BOSS

This is great news, especially with Barcelona not having a decent centre back I thought for sure that they would make their usual sneaky bid at one of our best players.

Absolutely fantastic news. Our back line is set for years and years. Koscielny is surely one of the top five centre backs in the world, and to see players of his calibre wanting to stay with us is a sure sign that we are going nowhere but up.

“Chelsea whatever you may be, you aint koscielney and to top it all you got John Terry. Who is the biggest cunt in history”

great news! almost as good as signing a new striker.. we got a rock solid partnership at the back.. bring the trophies home boys!

here goes: was he not in the team when we got mashed up at scousers x 2, citeh & the contemptables? Not an Adams imo but better than caesar…