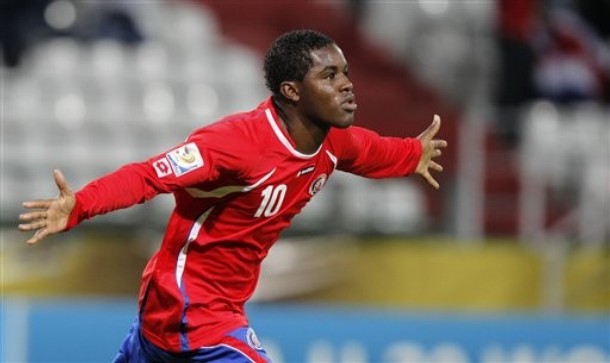 The agent of Joel Campbell has hit out at a man claiming to represent the young Arsenal striker in Italy.

Joaquim Batica has responded after quotes appeared from a man claiming to be acting for Campbell that he could move to Serie A this summer.

It’s now been revealed that the man in question is not affiliated with the Costa Rican in any way, and Batica said, “Joel has never met this man and doesn’t have a clue who he is.

“He does not represent his interests. I do. In fact, while here in Brazil, not once has Joel thought about going anywhere. He’s been purely focused on helping Costa Rica at this tournament.

“There are lots of people who have been in contact with me trying to engineer moves to different clubs, but none of them have authorisation from Joel or his family.”

It’s not unusual for people like this to try and wangle themselves into transfer deals as a third-party, but it seems this bloke has been well and truly shot down.

Batica also added some clarity to Campbell’s future, hinting that he’ll be part of Arsene Wenger’s squad next season.

“Once this amazing adventure here is over, Joel is heading to London,” he said. “He has always wanted to play in the Premier League and Arsenal is his club.”

Off topic, does anyone else think Ozil is a lazy cowardly fucker, starting to get a bad feeling about him, hope i am wrong

Can you give the guy another season before writing him off?

yea,i’m sure he has the ability, just not convinced he’s given to quote a horsey term! Its just i remember the Ozil that had the world drooling about him at the last world cup, he seems like a shadow of that player now. I would love to see him find that form and confidence again.

He does seem to have less of a thirst to ‘prove himself’ but to me, it looks as if he’s become more mature with his passes. I think it has more to do with exhaustion and how the team plays as to how his form looks ‘lacking.’ The Bayern players (6 out of 11) obviously know how to play with each other and many times, I see Ozil get the ball when literally they have no other choice but to pass to him, and then they don’t make themselves available for interchange with him. So he’s forced to dribble. His… Read more »

I think it’s always really difficult to comment on a player’s ‘desire’. Nobody knows how hard this guy wants it. I know there are players like Rambo who will run their socks off until their feet are bloody stumps, but just constant energy is not necessarily a guarantee of ‘heart’ or ‘desire’. Likewise, the way a player expresses themselves physically is not necessarily an indicator either. I know he sort of looks a bit ‘lax’ out there, but I think it could just be a bit of his natural demeanour. I think it is quite evident that Ozil can’t be… Read more »

I imagine so much of the tripe that appears in papers has similar origins. They’re just not usually publicly denounced like this.

I try to ignore the papers but the fact the official Arsenal twitter page has that bloody media watch just confuses me. Why would you actively and officially promote bullshit about your clubs activities?

Scenario I’m hoping to witness later: Joel to score 2 goals against Holland. He celebrates the 2nd goal by getting into Van Persie’s face and shouting “That one is for the Arsenal b*tch!” or something like that in Spanish

True. Without the comma, the sentence has a completely different meaning.

With all due respect, Joel has got a box of tricks but has a very small chance of succeeding in England because of the physical nature. This is also considering what Bloggs said the other day, that there is too much competition on the wings.

So if an Italian or Spanish club came in with 15m pounds or more, I’d happily trade with them for Campbell. Thereafter, use that money for the 25m-30m rated Griezzman or maybe a decent enough CDM like Bendner or Khedira.

Have to disagree, I think depth in the squad is always good. And, as we saw last year, we may have a few players that can play on the wings but most (Poldi, Cazorla, Ozil for example) aren’t that pacey – when Walcott and Chamberlain were injured at the same time we kind of struggled so an extra pacey player seems like a good thing to me.

Also, while I’m on the subject, I think one thing we’ve learned at this world cup is that Ozil isn’t very effective if you keep him on the wing like Germany seem to be doing, need to allow him to drift into the centre/swap place with other players as play allows.

On the contrary, being a pacy midget will very advantageous. He can cause no end of damage running between John Terry’s legs.

Were you a fan of Bendtner by any chance, purely on the grounds that he’s built like a wardrobe and equally mobile? Has it escaped your attention that small players in the Premiership over the last decade or so have inexplicably managed to score a few goals?

As I understand it, he’s 1.78m so say 5ft 10in. Not exactly a midget and he’s quite muscular. I think we’d be mad to sell him without spending a season here, especially as we’re lacking a winger or 2 (how many games did we play this season without any pacey wingers!). What’s more I don’t expect him to be great for us as it’ll be his first season in the PL and he’ll miss some of the pre-season, but still worth it.

So:
right back – check;
depth in the ‘pacey forward’ department – check;
world class forward who offers a quality alternative to Giroud – so much smoke must = fire;
add a CDM (rumours of a €20m bid for Khedera) and some more defensive depth and job’s a good ‘un!
And it’s 5th July, who are these people and what have they done with Dick and Arsene?

Where you see an opportunity for a joke, Gazidis might see an opportunity to tap into a relatively unexploited market. An Arsenal/Bender official merchandise shirt as an international symbol of gay pride – by association, it makes us look good for PR reasons, as discrimination against homosexuals will become a major issue in football at some point and we could be seen to be at the forefront of tackling it, and more importantly it’d bring in the money from sales. Of course I may have just insulted gay people by calling them benders, but a lot of people seem to… Read more »

Lol, getting number 1 bender on my back does seem funny. I’ll get my coat.

Did seem a bit weird for his agent to say he was definitely staying and then a few weeks later start saying there were clubs interested in him. Glad to see it was the bullshit it was suspected to be.

John Terry is still a cunt though.

At first, I read ‘joel Campbell’s agent warns off fuckers’

I know Özil is one of our better players… but I have to agree with the guy that wrote a hidden comment up there that I’m not getting good vibes about Özil either. Something is not right about him. Drifts in & out of games too much!

Ronaldo was rubbish at the World Cup. He needs to be stripped of his Ballon d’Or.

Ozil is 5″11′ with brown hair and medium build. A lot of his work is missed as he doesn’t have a shaved head, or blonde tips, he doesn’t do silly step overs, is always calm and doesn’t stand out on the field. He was so good for arsenal in his first season, the other players stepped up a level playing with him. He is just pure quality, but has to be accompanied with players that will turn his good play into assists and goals. There is no one at arsenal I would prefer to be on the ball, except within… Read more »

Ozil is a very good player,but he needs to do more for the team. The 2 penalties he missed in the champions league (he played them as if he was giving a pass to the keepers ). Ozil has got more in his locker than all our players but what the likes of Ramsey ,OX,BFG etc have that Ozil lacks is playing with passion. He plays as if there is nothing at stake. I pray he picks up this season. Luis Gustavo will be a better buy for us than khedira ,he’ll give us more defensively than khedira but after… Read more »