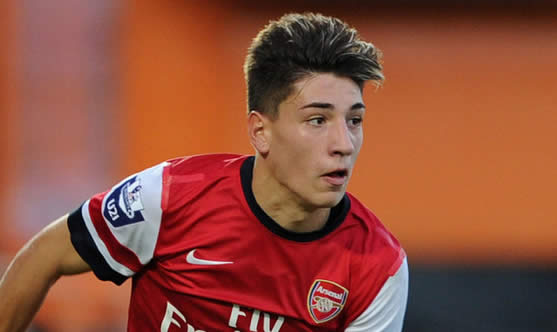 Theo Walcott has confirmed Arsenal have another ‘Speedy Gonzales’ in the ranks after revealing 19-year-old Hector Bellerin has broken his sprint record in training.

The England international broke Thierry Henry’s 40 metre sprint time (4.82 seconds) back in 2009 notching a nippy 4.42 seconds, but told a supporter Q&A session that the teenage Spanish right-back had usurped him as the Gunners sprint king.

Asked who’d win a sprint between him and Henry, Walcott joked: “Me! Thierry is in his 30s now so I would be very disappointed if I didn’t beat him. I beat his sprint record which Hector [Bellerin] has now broken.”

Obviously speed isn’t everything in football. Five years ago, Arsene Wenger mentioned in passing that Armand Traore was a rival to Walcott’s crown…and let’s be honest, he was a bit pants.

In other hard hitting news, Wojciech Szczesny says that he only became a goalkeeper because he was rubbish in every other position.

“I was not a goalkeeper by choice,” he told fans in a separate Q&A.

“I was just really bad in every other position. I was a striker and I was awful. I was nearly as bad as Chuba.”

We’re presuming the ‘Chuba’ referenced by our esteemed keeper is in fact young Academy prospect Chuba Akpom and not the long sheepskin coat made of thick Tibetan wool worn by many of the nomadic peoples of high altitude in the cold mountains of Tibet.

That wouldn’t have made much sense.

Bellerin: My body is back to pre-injury levels

“I was nearly as bad as Chuba.”

“I was nearly as bad as Chuba.”

That’s some top, top quality banter from the no. 1 right there!

Call me childish, call me lame, but I wan’t to know how to get a picture beside my comment!

Yep, it’s Gravatar. Only problem is it comes up as your Avatar on pretty much everything associated with your email address so it’s not always appropriate!

You are childish and lame.

Don’t ask me. I only posted my first comment on here today, with a username I’m using on a couple of other (non-Arsenal) sites as well. Apparently the picture magically follows the name (or the Email-adress), Arseblog probably uses the same system.

Bellerin and Debuchy gives a new dimension to our attack.

Never knew that Bellerin is that fast! Hope we get to see him more in action in the cup runs!

It’s really a quiet day at the Emirates.

Salivating at the thought of Theo and Hector double teaming to score regularly. They’ll be taking turns to shoot first, I bet.

Burak
Reply to  Me So Hornsey

I can’t decide if you meant your whole comment as a double entendre. Otherwise I can’t make sense of what “taking turns to shoot first” means.

Me So Hornsey
Reply to  Burak

Sorry. I had another tab open on a different website when I wrote this. Got a bit muddled.

even harry eventually saw sense, he got released didnt he?

Hope we see some of Bellerin in the cups this year so. He looked more than decent in the pre-season friendlies.

Ok Wallcoat you not get custard creame no more from Cheyu.

All biscuit for ballerina for most fast player, even can have taste of my penguin

But Cheyu, I like a lot of chocolate on my biscuit…

I have printed your comment and will frame it. Pure randomness mate.

Kinda miss hearing those old names, traore, hoytw brothers, pennant, baptists, almunia,hleb, lupoli.can you guys write a blog about our former players and their current lifes? I’d like to know what they are doing, what club etc.

Hleb’s diary: Today I got up and cried. Again I remembered what a silly boy I was to leave Arsenal.

According to Wiki, “Alexander Hleb, is a Belarusian professional footballer who plays for Turkish club Konyaspor.”

I wouldn’t worry too much about Hleb. Just Google Anastasia Kosenkova

V to the H
Reply to  Giroud Awakening

Fact: If you leave Arsenal, your wife leaves you.

I love Bellerin, I hope we see more of him this season. He just needs some game time now. Technically and offensively he’s already just about perfect. Only thing he needs is to fix his positioning sometimes.

Cygan Is My Religion

“is in fact young Academy prospect Chuba Akpom and not the long sheepskin coat made of thick Tibetan wool worn by many of the nomadic peoples of high altitude in the cold mountains of Tibet.”

And not the village in Iran either…

Doesn’t really work like that.
For one, .00 differences in speed may not seem like much on paper, but in life are a significant difference, even in visual distance.
And two, Usain Bolt is actually pretty “average” (context here) in the first 40m, as his acceleration isn’t that great. It’s when he gets upright and hits top speed is when the magic happens.

Either way, doesn’t take away from the fact that Bellerin is rapid.

Aamir, does he love you back?
Tell me everything!

I also read the article on the Arsenal website, but i wasnt sure if Theo meant that Bellerin had broken his own record, or Thierrys old one.

I also read that as Bellerin breaking Thierry’s record, and not Walcott’s

Indeed I think it’s right, the club would’ve made a slightly bigger deal if he’d got the overall record methinks. And now it’s being picked up by the media, with the Daily Fail saying Bellerin “confirmed to Arseblog.” I won’t link it here, don’t want to give them the clicks.

Wenger certainly loves speed, but mertesacker is the slowest. His tackles, positioning, and koscielny almost always make up for it, but he is the opposite of pace. Glad to have Belerin, hope he can break into regular first team at some point- great preseason.

Thought Ryo was one of the fastest ever?

I really dont know what happened to Ryo. The Hype sorrounding his arrival and the protracted Work permit issue and how he was considered on account of being ‘special talent’ feels lifetimes ago. Oh how fortunes can change. I hope he can find his feet this season because I believe its now do or die for him. Along with Le Coq and Benik Afobe.

He’s been injured a lot.

Hope he breaks into the team and shows his potential

Wenger doesn’t know what to do with Asians…

Unless Ryo turns into Ronaldo this year I doubt he has a future with us.Too much competition in his position and he is low on the pecking order.

If Szcz was a dinosaur he would be a bantersaurus

Love the title blogs gave Hleb back in the day. “King of the pre-assist”
Genius.

It can’t have escaped everybody’s attention that we’ve now got a group of high-class youngsters who could very well make the grade at Arsenal:

Now what would you give to make a Capital One XI out of those? (a) Just for the hell of it. And (b) because we can.

Since you included Walcott at 25, let me add to that list:

Wikipedia says Ozil is still only 25, turning 26 this Fall.

It’s easy to forget, despite what might be suggested elsewhere, that those two are arguably entering their prime years.

The thought of Bellerin the speed merchant (and exquisite ball player) made me wet myself (just a little)
A triumvirate of Walcott, Alexis and Bellerin ripping our opponents multiple new assholes off of Ozil’s sumptuous passes is causing me to pee again.
I wish the season would start already.
Up The Arsenal!

You need to see a medical professional about this excess urination.

I was really impressed with Bellerin against Benfica without realising how bloody fast he was. Could have a gem. Hope he doesn’t have that DNA issue later on in his career !

Hopefully we get Bellerin and Miguel on long term contacts before they have their breakthrough moment.

Also does Bellerin present the option of doing in reverse what Arsene achieved with Ashley Cole and take a defender and turn him into a worldclass winger?

Well he’s already been changed from a midfielder to a full back as far as I know so that’s prob where he’ll end up. Although it’s good to know he’s flexible

Dunno if the other Q&A sessions had obscure questions but the players at Royal Oak were asked ‘what would you do if you were caught between the barriers on the underground’
Chuba: Kick it..

It seems as though Chuba has been hitting the thumbs down button for the first two comments.

Maybe the pace might not expose his positioning issues as much.

Still, neither are as fast as an Arseblog match report.

I was at the Q&A with Theo in Dial Square. Another interesting question was about chants. Theo said his favourite song was Cazorla’s one and he said that he’s a little bored with “Theo, Theo..”. Asked the audience to come up with a new one for him. (Sadly this news does not seem to be spreading well. Blogs?) Also, Flamini was asked on his favourite player to play with and unsurprisingly he admitted it’s Cesc. Greeted with boos (and some applause), he said he is still in contact with Cesc and had a very good MF partnership with him. Players… Read more »

His name is Theo and he sprints around the land
Did he want to play up front or get paid a hundred grand?

Hilarious, while probably not very usable while he’s with us.

Hey RoyalwithCheese. Love the name. One of the best usernames since According to quantam mechanics. Or I am just biased towards one of my fav movies. Sorry gor this useless comment

Oh…that’s cool that there seems we got an emerging, speeding Gunner bullet coming up with matador’s blood taste!

Though,”not the long sheepskin coat made of thick Tibetan wool worn by many of the nomadic peoples of high altitude in the cold mountains of Tibet.” May be you are referring to Polish CHUPA coz we Tibetans never call chupa to sheepskin coat but to, made by lambswool through process of churning and hand craft. BTW nice write and still one Tibetan Gooner for life.

To Pooh is to Do
Reply to  Tibetan Gooner

I was wondering when you’d show up. Never underestimate the Gooners from all over the world.

I think after this Woj has earned the title Archbishop of Banterbury.

The Daily Mail is sourcing this article and the conclusion that Bellerin broke Walcott’s record specifically.

It says
“Arsenal have another speed merchant in their ranks after Theo Walcott revealed that his club sprint record has been broken.

Walcott confirmed to arseblog that Hector Bellerin is now crowned as Arsenal’s new speed king, after he beat the England flyer’s personal best time over 40 metres.”

A link in the daily mail blogs. Don’t let it go to your head now will ya? 😉

Bantom of the opera

So Blogs, if Bellerin is the new ‘Speedy Gonzales’ who is ‘Slowpoke Rodriguez?’

Fantastic player in the making!

Night and day to jenkiinson. Puts in his crosses with intent where jenkinson whips them in blind to the blind adoration of media.

Fantastic control and creativity where Jenkinson is still too one dimensional and predictable.

Will mean Chambers will be kept central. When we get a new Cback, Chambers will likely be fourth choice Cback and/or DM third choice.

Hope he doesn’t start that DNA shit when he’s the shit.

So if Walcotts record has been broken, what is the new record? How much was it broken by?

This proves I know fuck all about football.

Bellerin’s speed hasn’t gone unnoticed. What I really, really like about him is that he’s also incerdibly fast with the ball, and has skill to control the ball at high speed.

RB is not a problem, and that is just downright amazing, given BacSag still had some proper quality to him…