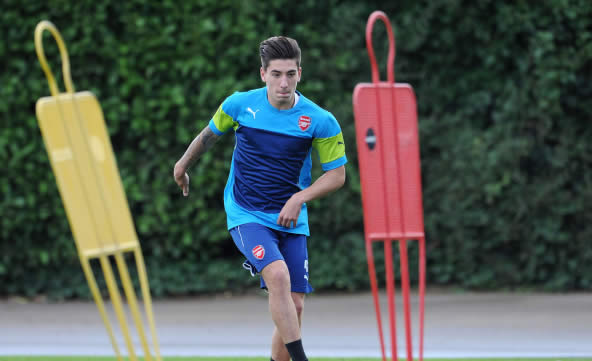 Mikel Arteta has sung the praises of Hector Bellerin, saying that his young compatriot has the potential to be the club’s right back for years to come.

The skipper spoke about the former Barcelona youngster who was given a baptism of fire in his first Arsenal start in the Champions League against Dortmund.

However, Arteta believes Bellerin has the talent to go all the way as he prepares for just his second start for the club tonight.

“I think he’s a top player,” said Arteta. “He’s going to be the right back of Arsenal for many years, in my opinion – providing he continues to progress in the way he has been doing.

“Mentally, he handles what is requested to play at the highest level. He’s got pace, technique and he’s a very positive guy.”

Arteta also revealed he’s doing his bit to help guide him into the world of firs team football.

“I talk to Hector a lot,” he continued. “I know him well because he’s taken part in pre-season a few times with us already. He’s a confident guy and we treat him as any other player because he’s part of our squad.

“Hopefully he’s going to become a top player at the club.”

Meanwhile Bellerin himself is grateful to the manager for giving him the chance to play. While we’d all like to see a little more defensive depth, it’s also nice to see a young player coming through.

:I’ve been training with the first team since the beginning of the season,” he said, “so obviously the only thing I can say is thanks to the players and the coaches.

“They are giving me the chance and have faith in me so that’s what I’m going to give back. I’m looking forward to playing more games and I’m really happy with the way this season has gone so far.”

Jenkinson’s still in good shape. Hope he gets game time at West Ham when he recovers from injury. Once he’s back Debuchy will be nearing 30, so from next season onwards both Jenks and Bellerin will be eased into the first team. That or Jenkinson is developed into a centre half which atm I don’t see happening.

Jenks doesn’t have anything approaching the abilities of a CB, maybe a defensive right midfielder (with some serious work) but his abilities are those of a wide player

Gunner From Another Mother
Reply to  Daft Aider

Gave you a thumbs up because it legitimately bothers me when the votes read 8:2

Gunner From Another Mother
Reply to  Daft Aider

Also I agree with your assessment of Jenkinson

He made a sub appearance during the weekend for West Ham

Jenkinson is a great chap

But he is technically limited and one dimensional. He also whips his crosses in blind.

Bellerin is a better player.

Agree with all except the “whips his crosses in blind” part. There were two things I always knew when Jenkinson was in the team.

1) He would give absolutely everything to the team, sprinting up and down that right side all game.

2) He would play in the best crosses of any outside back in the team. Bac was never great at crossing, always seemed to hit the defender right in front of him, and Gibbs still needs to work on this part of his game. Monreal is ok, but not amazing.

Anybody know if there’s going to be a live TV coverage for the game tonight? Arseblog?

I think he’s going to get a fair amount of game time this year, looking forward to see him replicate what he’s shown in the youth team and training for the first team now, it does feel like we’ve been hearing about him for years now

Well, nothing gets more down thumbs than asking why you’ve been down thumbed. As for the first message, there’s always someone who’ll object to something. Maybe try not to worry about it as they’re imaginary thumbs from people you’ve never met.

but i thought they were the measure of a man (or womyn). My whole concept of self-worth is base on on arseblog thumbs. Worldview fundamentally shaken to its core

I expected thumbs down to that comment to be fair, not so many for this one though

Maybe it’s because sound just like an Arsenal player of the website. What’s it called? Generic.com? Just post something about Terry being Cunt, that’ll help you achieve those ever so illusive Arseblog likes.

My landlord is called Terry, he’s not a cunt

Anyone else noticing how the articles say they have been posted 50+ minutes ago even when they’ve just been posted within a few minutes?

In any case, I hope Arteta is right! He seems like a very dynamic player and should be with us for years to come.

Have also corrected this sentence for you:

“Meanwhile Bellerin himself is grateful to the manager for giving him the chance to play.”

“Meanwhile Bellerin himself is grateful to all the other defenders for getting so injured thereby forcing the manager to give him the chance to play.”

Nope you’re partially wrong. Yes, it does play a part, but are injuries the ONLY reason why Bellerin is where he is today? Every talented young player needs his lucky break and sometimes it comes at the expense of health and fitness of other senior players.

Oh come on guys! Half joking. What’s with all the negativity? Hoosier Gunner is absolutely right- injuries are sometimes exactly what a player needs to establish himself and get the neccesary experience. I have nothing but love for Hector.

Bellerin had been training with the first squad already this season, but bc of the injury list has got a chance to shine (or not!) sooner rather than later. Good luck to the lad, may the force be with you!

That’s settled then. He’ll be playing for Barca from next season.

I kid, I kid. Barca and Real Madrid are our feeder clubs now! 😉

fabulous
Reply to  The Only Olivier is Giroud

He DID mention he fancies a return to Barca in his 1st interview with us though so that’s a real possibility. Really hope he looks at Cesc and notice how the grass isn’t always greener elsewhere. Have to feel for Cesc though, playing for Chelsea must not have even been close to being one of his dreams, and he now has to pretend to like John Terry. But wtf, he somewhat deserves it thinking he was way too good for us and agitating for a move. Just hope he doesn’t win anything at Chelsea.

Cesc can do one. He thought the grass was greener, essentially going on strike to force the move, a year after disrupting our whole summer with the ‘will he won’t he’. Remember Puyol draping him in a Barca shirt? Even last week, Fabregas saying “I’ll always be a gunner”- what utter horseshit. I have no sympathy for Cesc whatsoever, and whilst I don’t wish anything untoward on him- I do sincerely hope Mesut Ozil plays like a ‘little bit playstation player’ this season, scoring and assisting to an extent that shames every other no10 in Europe. That’s all I can… Read more »

While I too have little sympathy for Cesc … and hope he has a truly dreadful time at Chelsea … no one says “I’ll always be a gunner” unless they mean it.

Hate to say it but i cant see jenko getting into this team with chambers and now poss bellerin ahead of him…. shame because he would die for this club not many players are as comitted as him.

Well, we really don’t need players who are going to die, if not who’s gonna play games for us. We need players to play good football.

Bellerin is a personal favourite of mine for his calm mind, flourishing skill and blistering pace. I see no obvious reason why Hector can’t be a steady first-team player by the start of the 2016.

I’ve been saying this for months now. Bellerin is the real deal. Don’t be surprise if he supplants Debuchy by the end of the year or early next year as the starting right back

You got too many downvotes for simply predicting the future

Glad to hear Jenks is back fit enough to get some time at West Ham. If he performs, it would be nice to have him back to give us some depth over there. In the mean time, I think we need to keep Chambers at CB and move Flamini over to RB with Bellerin. If that makes us a man short at holding midfielder we have the perfect replacement in the Ox. Ox doesn’t have the passing skills that AW likes from that position, but with the speed we have up front now (especially when Walcott comes back) we need… Read more »

Oops! forgot what I was gonna write, I’d be right back.

With Chambers under Per’s wing and Bellerin under Arteta’s, and both being 19, it looks quite promising for the future of our defence.

It’s the immediate situation that is a slight, erm, concern.

i want to boff welbz and I'm not even gay

I recognise Onegoodgame Townsend, who’s the other cunt?

That Hector now has his chance at RB due to injury must be considered something as a Pyrrhic victory for the lad.

Yup, got a few thumbs down because noone got the pun. haha!

He’s at the same age when Cole and Gibbs made their bow. He needs to concentrate on getting the basics right defending at the moment and I was happy to see him demonstrate just that against Dortmund. Thereafter, he adds a new dimension for us at RW attacking as he is quick but also whips his crosses in with intent. He is also very creative going forward. Along with Walcott when he returns, our right flank can be a very strong weapon and the added width will afford the players in the middle (Ozil, Ramsey, Jack, Welbeck) more space to… Read more »

The negative cost of bellerin getting his chance is nil. So it’s a victory but it is not at too great a cost for him.