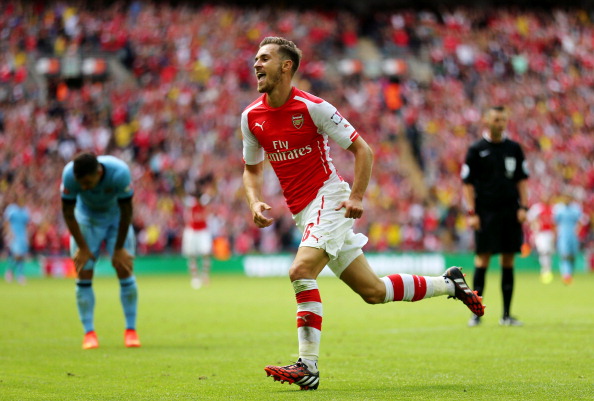 The Welsh Jesus looked to injure himself towards the end of the game and hobbled off before the game had finished, which will obviously lead to doubts about his fitness ahead of Saturday’s crunch clash with Man City.

Replays showed that he looked to take an opponent’s studs down the Achilles – which is better than pulling or straining something – but until he’s assessed we can only fear the worst. Hopefully it’s just a sore one in the moment and not anything too serious.

With Mesut Ozil not used by Germany during the Interlull because of the ankle injury he picked up against Leicester, it would leave the Gunners without two of their most attacking/creative players. Not ideal when you’re facing the champions.

Arsene Wenger will meet the press ahead of that game on Thursday morning at which point we should have more information.

Wales manager Chris Coleman to BBC Sport Wales on Ramsey: “He twisted his ankle and got a kick. Hopefully he’ll be ok for Arsenal on the weekend.”

And here’s how he did it…

Remember the invincibles
Reply to  Previgo

Rosicky. He’s the big game player. And he was outstanding for the Czech against the Netherlands last night. Made me think about what he could have been for us. Still some player though so let’s use him

Aaron
Reply to  Remember the invincibles

Rosicky needs to play right now, we aren’t at our best and seem to be moving the ball around at a pedestrian pace which is no good for the likes of Alexis, Ox, Welbeck. Rosicky would add some much needed urgency to our play at least while our new players are still settling in & getting to grips with the new formation (which hopefully don’t stick around too long!)

Seems pretty standard for at least 1 injury to occur during the interlull, useless crappy interlull.

And on another note, he shaved his beard. Deserves an article of its own, surely?!

Welsh Jesus will play and will be a huge impact with our new awesome English core. #longlivewelshjesus

There you go….two minor injuries and our squad looks paper thin. Wenger had his chance to get the DM but bottled it. Now an injury to Per or Kos and we’re hanging on for fourth. Why do fans know more than the fuckers who are paid millions? Fuck them.

I hope that Wilshere keeps playing as well as he has so far (Contrary to the Jamies, I think he’s having a pretty solid start to the season).

But I disagree that Rambo was anything approaching “awful”. By his newly elevated to the edge of the solar system standards he’s been perhaps hovering around Pluto rather than by the Kuiper Belt. However you might want to read up on the last three “by the numbers” on this site and do a page search for “Ramsey”. Let me know how that goes.

Ramsey isn’t a DM anyway! Stop being such a negative **** and try supporting the team. Saying Wenger “bottled”it is just your speculation, we have Arteta and Flamini to play that role, signing an army of DMs isn’t the secret to football glory.

Or we don’t cry about it and see what happens.

You crazy? The two injuries are probably in the positions where we can actually afford to have them

22 players on the pitch, one of them manages to get injured. Guess which one…? That’s right kids, your best player!

And this season the footballing gods have decreed Arsenal players shall be taken out every game with an injured ankle!

Ozil is apparently fit, as is Gibbs.

Coleman on Ramsey (taken off late on in Andorra): “He twisted his ankle and got a kick. Hopefully he’ll be ok for Arsenal on the weekend.”

And on the 3rd day, he rose again…

Why do you ask my name? It is beyond understanding.
Reply to  La Défense

And he will come again in glory.

Bugger! I can’t even make a comment about how he shouldn’t have played because Wales shouldn’t need him against a team like Andorra, because Wales nearly went and lost the match. Smeg, but I hope he and Ozil will be okay for Saturday.

Time for some Rosicky’s magic!

Why can we “only fear the worst” Mr Glass half empty. Quit spreading your pesamistic attitude around and freakung us with out with injury worries when there is no need whatsoever.
One day someone might actually report something relevent in a positive light.
Like: Aaron Ramsey limped off last night after taking studs to his calf. Bet it hurt like a bitch, however knowing the gile and drive of this young welsh superstar its only goin to fuel his determination to come out and smash an early one into the net against city!
Perspective….its wonderful.

Watched the game and the Andorrans were behaving like a bunch of cunts, blatantly fouling left right and centre.

Not surprised the Welsh Jesus is injured, to be honest.

Doesn’t look too bad, though we’ve seen people out for a long time for a lot less. Fingers crossed for Saturday.

I’m usually not the most religious of blokes (also usually a tad more sober but fuck it it’s my brother’s nirthday so fuck it being Tuesday) but Im beginning to think Wenger went in some deal with Lucifer Himself going “Aye, if ye were to allow us a season unbeaten, we shall be utterly fucked regarding injuries for as long as I’m in charge of Arsenal”. Other than that, come on. United won the league with van Judas ALONE in Fergie’s last season in charge. Had we fielded that exact squad with one player of that quality to pull it… Read more »

Chineseses
Reply to  The Only Olivier is Giroud

We barely secured top four with Judas, had he been injured even the Europa league would’ve been out of the question.

Well that’s certainly bloody bad news! I suppose the only good news to come out of tonight is that I watched the Czechs and thought Rosicky was outstanding.

These qualifiers are such unbelievable bullshit. Yesterday people were saying England had basically assured themselves qualification after one match. One match! The only drama is whether Wales gets in or not. I’m all up for Wales going to the Euros, so are the advertisers, so why not just let them in and be done with it.

I know, Andorra wants a shot too, but if they want to have one they have to at least find an actual football pitch, and not have their matches in a blooming parking lot covered with carpet.

Ramsey’s beard is gone!!! Its a shame really I really did like that beard..

Unnecessarilystupid
Reply to  The Red Cannon

It had to go. We need a more streamlined Jesus.

Oh for fuck’s sake, we truly are cursed!

Why do you ask my name? It is beyond understanding.

This is my body. Broken for you.

He even did the Hughes turn.

yeahhhh, thats not a thing…

Cometh the hour, cometh the man. Our Man. Jack Wilshere.Although I think Rambo will be fine for the match against sheikh city.

Match Prediction: Welbeck to sscore a brace in a 4-2 win for the Arsenal!!

Losing Ramsey would be a nightmare, we don’t have another midfielder on our books with his characteristics. Poor squad planning, too many small, slight playmakers who can’t tackle or head the ball. Not enough energy, power and grit through the spine of the team. 6 defenders for 4 spots. Arsene’s a genius though and Ozil will come good once he’s had a season to bed in, got over his World Cup hangover and we give him pace and movement to work with, can’t wait for the next excuse, will probably be he’s just biding his time for when he peaks… Read more »

Aside from Flamin/Arteta/Rosicky/Diaby and sometimes Wilshere, we have no players who can tackle or contribute defensively in midfield.

Just thought I’d help fix your statement for you.

“Hopefully he’ll be ok for Arsenal on the weekend”

Yeah, with our luck it’s more like “Hopefully he won’t be out for more than 3 weeks for Arsenal.”

Despite all the worries about injuries, I have a gut feeling we may have made the buy of the transfer season with Welbeck. Tall, powerful, agile, quick. Play him in the middle up front and this could be a dream come true. Was played out of position because of Rooney and VP. Just have a feeling he is going to be what we have been looking for.

I doesn’t concern me at all, since what i know Jesus could heal wounds?

bummer he picked up a knock; but that little clip shows how much confidence he is playing with. pretty audacious moves

i thought it was some pretty daft stuff really…last few minutes on a dodgy pitch with opponents just kicking out as hard as they could and he goes all Zidane for no reason…..

That would be my starting lineup for sure

It just looks like a sore one. Hopefully. If he’s done his achilles that’s a nightmare.

And don’t forget Alexis is playing in a meaningless friendly in Chile in 2 hours time so he’ll be fucked too! Poxy internationals!!!!!

Looks fairly innocuous but then again i remember thinking the same about Giroud so..

Hopefully not too bad, but if he’s out I’m sure Jack, the Ox and TR7 will be ready to impress. I for one have been a little sad not to see more of the later of those 3 since pre-season.

This is the last thing an arsenal fan can wish. But I really don’t understand why these key players are always so very brittle and go down with injury often.

Having watched the game, it looked like it was more the jarring of the ankle as he turned than the studding that did the damage. Innocuous looking but then we know how that normally turns out…

Pray for the Welsh Jesus!

Pointless internationals this soon after a world cup and 3 weeks into the season, and our players are getting hurt. I love Uefa and fifa so much.

Rosicky was a beast today for the Czech Republic vs Holland. Perhaps the wily magician has a few tricks for Citeh up his sleeve.

Wilshere was pretty solid for England as well.

Though I would genuinely like Ramsey to be fit there is no need to be worried folks even if he is injured..We are a team..Wilshere will take up his role and will be good for his growth.The more games wilshere gets more its good for us. Come on wilshi prove the haters wrong ..

Coquelin is also a specialist at dm. Im not saying hes great but hes part of the squad and number three at dm if we want to use a specialist.

the man who would be bling