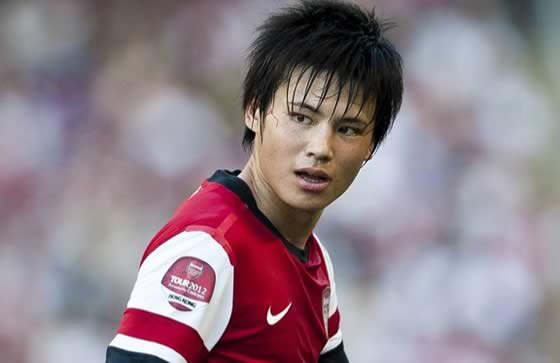 The Japanese winger has found himself very much on the fringes of the first team and his career has been riddled with injuries.

Despite impressing on a loan spell at Feyenoord, he struggled at Wigan and since joining Arsenal has only made 7 first team appearances. However, before going out on loan, he signed a one year extension to his contract, perhaps so the club can guarantee a fee if and when they move him on.

He was always really fast, but never quite good enough. I once saw him in the flesh and his skin was so smooth it was almost enchanting.

Must have Ryo-lised he wasn’t up to it

What’s the point of the extension?

‘However, before going out on loan, he signed a one year extension to his contract, perhaps so the club can guarantee a fee if and when they move him on.’

Because Venga is King Troll.

I kinda recall how I shared the news of his signing on fb by the headline “Arsenal’s striker woes have finally come to an end!” I remember he was signed in the same season but the Dutch skunk ditched us. Sad how we’re still crying for a quality striker on deadline day,

It makes one think, doesn’t it? Oh for the ‘Dohs’ murmured by Homer in anger!

I’m Ryo-lly sad that he never really Myaich-ed up to our expectations.
Devastated.

You must be new here. Homoerotic comments about Gunners are NEVER unrelated on Arseblog.

Shame it hasn’t worked out for him, I really wanted him to make it. Maybe if he does well we’ll give him another chance, but I’m expecting that’s the end of his Arsenal career. I think Holland fits him well.
He did very well at Feyernoord and if he can avoid so many injuries I think he’ll be able to make something of himself.

We are really not signing any one are we?

Is Danny Welbeck in?…not happy but a prospect out nothing.

Best of luck to him. Always professional and always looked like he was trying. Perhaps not up to the grade, but not his fault. Forwards, Ryo.

Bet we lose out on welbeck. Despite all the stick I think he’d do well. Quick, mobile, good link up play, works hard. Better than Sanogo, bet than Podolski as a lone striker probably be better than Giroud if he gets a run down the middle.
Anyway where the FCK is the centre back

He was once the ‘next Ronaldo’
Good luck to the lad

We always fuck up the transfer window

‘Vermaelen may leave. If he goes we will replace him.’

Thought he did really well whilst on loan at Bolton; namely in that game against Chelsea. Still to see a plenty from this chap in the future, I believe.

Sojo I hate to say it but I think you are correct in saying we ain’t signing anyone – what happened to replacing tv? How about a striker – quality one so that would discount welbeck!!!

His name is Ryo and he’s not even on the bench,
Just as good ’cause if he played we’d blench,
But when his skin shines he really shows you all he can
Oh Ryo, Ryo move along for a fee so grand!

Are fucking stupid! Danny welbeck is not a tad better than sanogo! Are you kidding me.. is this were we’re at? WENGER? And I’m a huge supporter of WENGER but this is just awful… now I really know he is clueless sometimes… he didn’t have a plan for this so went and panicked bought welbeck are you serious just mentioning the name and reading the price makes me mad. Baloteli went for the same price is welbeck as good as baloteli? I’d rather buy no one and save that money till a better option comes up January but now he’s… Read more »

And he won’t admit this but he panicked bought ozil cause we didn’t need him we needed a striker but when the fans were getting at him to spend spend and ozils opportunity came up he saw that as a way to please the fans and to cover and balance the book he couldn’t buy cesc if he knew Cesc would be available the following summer I’m sure he wouldn’t have bought ozil WENGER is mot that stupid. 3yrs later were still screaming for a fucking striker and he’s buying all this midfielder! He always said I’ll buy if I… Read more »

Welbeck not better than sanogo. Are you having a laugh, no disrespect to sanogo because its not his fault but he wouldn’t get a game at Rotherham never mind Arsenal.

Welbeck is not a bad signing. Balotelli would have been better but it’s on a par or maybe just slightly better than Remy. Although he’ll just rot on the bench.

Please not Welbeck..better give chance to Benik or Chuba or Campbell

why are we talking about welbeck on a news article covering ryo?