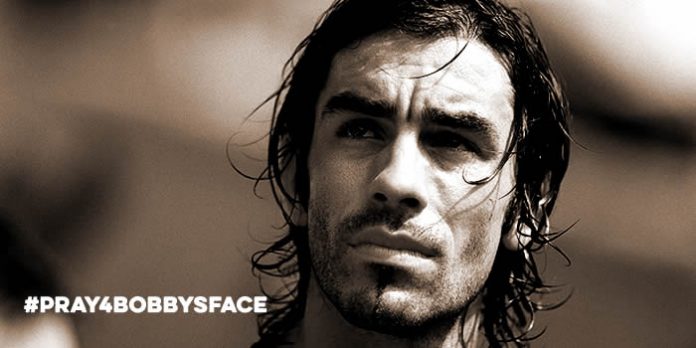 If you’re not already sitting down, Arseblog News suggests you assume the position and brace yourself.

Why? Well, it seems that some ruffian punched Robert Pires in the face. Yes, his beautiful face.

As you know, Pires is playing in the Indian Super League for Goa, and in a game against Atletico de Kolkata,  as the teams went down the tunnel for half-time, their coach, Antonio Lopez Habasas, jabbed Bobby right in the mush.

Goa coach Zico said, “One of our players said that he was beaten by the coach of the other team Pires said he was punched on the face by the Atletico coach and it is very shameful.

“I am telling you what my players told me and I didn’t see that myself but I don’t think that Pires will lie and say something that didn’t happen.”

What an absolute rotter this Antonio Lopez Habasas character is. The kind of man who wouldn’t enjoy being snorfled by a puppy, we bet.

What kind of sick world are we living in when people try to destroy all that is beautiful? We need to lie down.

Am I doing this right?
Reply to  Fumanchu

If he had any chance of coaching in Europe or the PL do you think he’d be in India?

ISL is trying to take baby steps towards strengthening professional football and making the game a wee bit more popular in India. Let’s not be so condescending. BTW, Atletico de Kolkata is part owned by Atletico Madrid, hence the name.

I feel sick and disorientated.
This has ruined my day off work.

Won’t somebody please think of the children?!

Why would anybody want to attack a face so dreamy?

Is nothing sacred anymore !?!

I saw the match live. What a rough game it was. Bobby was very angry.

Are we sure this wasn’t arranged by Giroud to cement his place as the one and only HFB?

Oh come on stop giving Giroud stick for everything…

Does anyone have any respect for handsome French wizards? Back in my day, if you did that you would be put in stocks and pelted with rotten fruit, which was very prevalent back in my day as we didn’t have tescos or fridges or any of that malarkey. Kids respected each other. Not any more. I blame the internet

What a rotten period for us… No proper DM, crumbling defense, clueless attack and now Bobby getting punched by a thug. Surely we have hit rock bottom and the only way is a upward spiral?

Giving Giroud a spanking would be hitting rock bottom.

Scummer, pox and wound! Gods curse the pig-tarsed mammering craven currish beef-witted bum-licking gut-griping lout that did this to Bob! May every flea, leech and hookworm in all creation find and feast upon them!

**Bob Dials number on his Mobile:**” Patrick, pick up Keown and get on the 2pm flight to Goa, I need you to take care of some light-work’

Do I need to send Ryan and Charlie down there?

Please send Shawcross over there, preferably on a one-way trip.

I hope the locals dish out some village lynch mob justice to the perpetrator!

He was just jealous.

Spurs fan maybe?
An immensely bitter one considering how much bobby tormented them

This has left me in tears. Lord have mercy on Bobby’s boat race.

How does FIFA allow this Facial Genocide. Blatter Out!

Then see who he hit in face again

Please tell me his beautiful facial hair is still intact

You know what I blame this on the the breakdown of? Society.

Bobby will be fine. Not many people know that his wonderful luscious beard is not actually made from human hair. No. It is actually made from a billion carbon nanotubes woven together by the use of captured alien technology from Area 51. His beard therefore is actually a furry chin helmet of immense strength and power….

Poor Robert, get well soon! Can someone make the thumbs up/down button bigger for on my iPhone please 🙂

Merde. Well bang goes his part in the next a team film as the face

Some men just want to watch the world burn.

Some men just want to watch the world burn.

A piece of what makes us human died today

Wow, I’ve never seen a joke ruined to death quite like you idiots are doing right now. British sense of humor is so cheesy to me.

Pires being punched in the face is a joke to you?… You sick bastard!

Really?? What a doughnut!

Can we start an appeal to have this vile abuser executed.

I got a loose stomach from reading this…had to run to the shitter.

Some of us started supporting the club as kids because of the nickname and the TRUE and first meaning of the word ARSENAL. You lot??

At least he didn’t destroy this for arseblog
http://arsenalfcblog.com/wp-content/uploads/2008/09/pires-342335.gif

I just found out that GOA has the most lethal left flank in the ISL. Imagine andre and bobby….. SIGN THEM UP