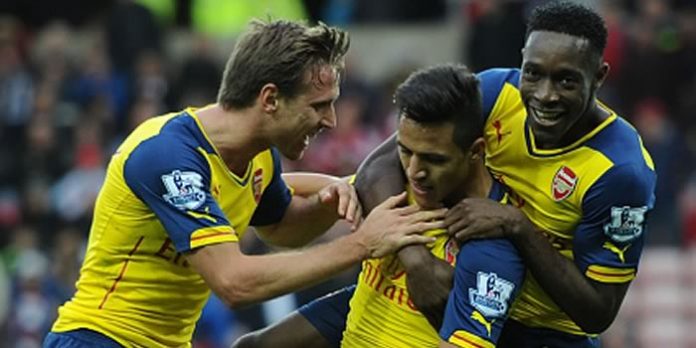 Danny Welbeck and Mikel Arteta have hailed match-winner Alexis after his two goals secured the win over Sunderland at the weekend.

Following in the footsteps of Alex Oxlade-Chamberlain, who extolled the virtues of playing alongside the Chilean, the former Man Utd man was equally effusive in his praise.

Speaking to Arsenal Player he said, “It’s a pleasure to play with Alexis. He’s persistent, he keeps going and they are the attributes of somebody I like to play alongside.

“The boss told us before the game to press their back four and try to force mistakes. The first goal came from that, so it was something that worked quite well today.”

Meanwhile, the skipper says that playing alongside Mathieu Flamini in midfield allowed Alexis more room as he was deployed behind Welbeck.

“Last year we played some important games together and I think we understand each other well,” said the Spaniard.

“We wanted to give a bit more freedom to Alexis, playing a bit behind Danny, more like a 4-4-2, which we haven’t played for a while. It worked – I think Alexis did very well today so we’re happy for him.

“His confidence is high. Physically he’s better, you can see that by the runs he was making in the 93rd minute, chased the keeper and kept going. That’s all about him – he wants to keep going, he wants to improve and he’s doing very well.”

I’m fast developing a man crush on Alexis. There I said it.

You’re not the only one my friend

Will
Reply to  Dale

My girlfriend (who before this season had never watched a football match) watches every Arsenal game now in the hope that he’ll take his shirt off again..

I hope they bring on Ospina immediately if that happens. Szczesny was so mesmerised by that sight that he let in Man City’s equaliser moments later.

Was Christmas shopping for my yet unborn niece/nephew last night, and of course went to the Arsenal shop online (got to get the little one started right in the world)

Ended up buying an Alexis shirt for myself as well.

The rest really need to step up and follow his example.

Teacher: use one word to describe Alexis.

Teacher – use Sanchez in a sentence
Student – The gunners Sanchezed Sunderland last weekend.

So the boss told them to press the back for and yet only Sanchez was the one doing it, Good work guys

You missed the word ‘consistently’ as the others did press them occasionally.

Cute…and well deserved! Dreaming of the day when the name Alexis is replaced by:

You can’t go far relying on 1 player to make things happen…sorry to spoil the festivities mood!

Loufa ( Happy that Chelsea drew, Mourinho mad, but unhappy the Dutch A*$ scored)

Not replace. Accompany.
Join on the scoring sheet.
Take example from.
Take a page from his book.

Exactly, seems I was misunderstood there…Alexis is the best thing that happened to us this season, why would I want to ‘replace’ that?:)

The expression of super quality. What a sight!

Because he’s a freaking beast. Beasts don’t settle in. They tear stuff up. Except for bunnies about to be eaten by wild boars, apparently. Those they rescue.

There are a few things he will surely continue to get better at – understanding teammates’ movements and resulting passing accuracy for a couple – which could be considered ‘settling in’ but yeah, he’s still been an nearly instant boon to the club.

Funny what a little determination and hard work will do on the pitch.

Yeah, despite scoring goals and getting assists, as well as generally looking like a beast, he’s also misjudged a lot of things due to lack of understanding and not knowing what Premiership teams do; there is a period of adaptation but given his natural game is pretty explosive and not very tippy-tappy it’s less of an issue.

It is unusual. Santi had a great 1st season as well…

A fair point Racceer above
Unlike others he seem to have settled very well. Even following a good world cup campaign
Lots of others who played 45 minutes are struggling back.

Alexis is going to be a legend for arsenal. I love the thought of him, Welbeck, Theo and Ozil bombing forward on you..Alexis is top shelf

Love sanchez but need to rest him against burnley.its time to give podolski,rosicky & campbell some games.wenger need to rotate more

He has a week to recover, plenty of time.

Alexis is exceptional and deserves the credit. But other players should leave the praising and saying nice things to us fans. They should be busy emulating Alexis. Alexis even gestures to them to pressure opposition players but all you see is players jogging around as though it’s a training session.

“The boss told us before the game to press their back four and try to force mistakes.” (So only Alexis did that and we all cheered from a distant.)

Alexis truly deserves all the credit from his team mates.
He works so hard every game, which is something he learned at Barcelona, lose the ball, go get it back attitude. He was just overshadowed by Messi.
It’s nice to see him at Arsenal making things happen. We just need the rest of the boys to pick up the pace and fight for first place.

Hoping his hunger will rub on the rest of the team and so dramatically change our season…….COYG!

So why Wenger didn’t start him against chelsea ?

He did start him against Chelsea.

One of a kind. Well allmost, there is Hazard who seem like Sanchez’ s separated at birth Belgian twin But I think those kind of players are the future of football. The full on machine that never back down and never relent and just keep on harrowing the opposition. My fav player by far this year simply because he is the only one that seem to give a fu*k. But the worst thing is that there are no consequences for slacking in our team. If you are one of Wenger’s favourites, you can put in a minimum oF effort and… Read more »

Yeeeeeees, if Hazard had a work ethic and the right attitude then he might just be able to lace Alexis’ boots.

I’m not convinced that so few of our players are trying though, I see a lot of effort from most of them but when there’s a switch at the back of our collective mind marked ‘flip to make all players tentative and error-prone’ then it doesn’t really matter how hard they try.

Dear Flamini.
Clapping your hands or running your mouth is not helping the team. You either use that energy to focus on your game or quit the team.

Since you seem to have spoken to the entire team about this issue, could you next time ask them to all press a bit more with Alexis.

You say this like American isn’t speaking the truth, all you see is Flamini pointing and screaming at people but never do you see him actually you know doing his own job, too often is he the one too slow to be in position and rarely actually tackles people usually just gives away fouls gets his yellow card and leaves us worrying that we will end with 10 men. Excuses can be made for other players being in the team playing poorly but keeping their place but Flamini has been one of the worst players this season. Love love love… Read more »

Was one of our best players against Chelski, if not the best, just sayin

Alexis for king and president and ruler of the world

Blogs,
Is there anything I can do to not see those ads with the rotted feet??
I mean, I like to check in over lunch and, well, I am sure you get where I’m going with this.

Dear chairman. Since you don’t seem to understand how the premiere league works, let me tell you how. No doubt Alexis is exceptional and everyone on the team needs to work like him. Our team needs a DM which is the position Flamini plays. He is not at the level of the other players we have, and pressing? As a DM, he is the worst I have seen in the league so far. If you are going to ask someone to press, it would make sense if you are also pressing. The only one qualifies to say that is Alexis.… Read more »

To Pooh is to Do
Reply to  American Gunner

That’s what she said..

Howz about you invade the PL and show how its done eh?? Oh I’m sorry.. Soccer was it?? My bad yo..
Laughable.. Selfies and Sex.. and wait for it…….. Stupidity!!

Sanchez is just a little terrier, he doesn’t like to lose and will run and run until he gets a goal, he just has that omf about him and he is just full of fight and pride, we need the whole team to be more like him because at the moment they just don’t have.

Sanches is playing where we were hoping Ozil and Santi would have shone. Welbeck and Sanches have really done well since their arrivals, but lets be honest here, they making some serious waves because if we playing those two up front, and we playing both Flamini and Artetta, then that means we only have two midfield spots remaining, plus the three substitutes. Lets assume those two spots are taken up by two wide players, say Santi and Ox, what does your bench look like when Ozil, Giroud Walli Campbell and Podolski Ramsy and Jack are all looking for game time.… Read more »

What I would give for Arsene to sign a couple of players, in different positions, who have a similar work ethic and attitude to Alexis.
If we had 10 Alexiss/Alexis’s/Alexises…Sanchezs outfield we would walk the league

i want to boff welbz and I'm not even gay

If you had 10 Alexis’ you’d be rubbish at defending corners. Thinking about it,no change there, lets do it!!!