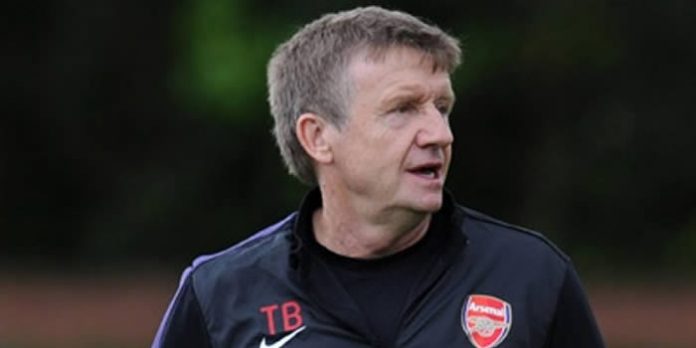 Burton interviewed for the position but was overlooked for the Dutchman who arrived at the club to replace the Irishman who announced his departure last year.

Jonker had spells at Bayern Munich as assistant to Louis van Gaal before managing the club on an interim basis, as well as jobs as assistant of Wolfsburg and Willem II.

Speaking ahead of this weekend’s game against West Brom, where he’s now employed as ‘Technical Director’, Burton said of Jonker’s appointment, “I still think they’ve made a big mistake. I think if it wasn’t me, there’s good people out there that they could have put in.

“It’s a massive job. There’s a lot of work to be done there. Arsenal, with respect, have fallen behind. They just weren’t working hard enough, like Chelsea.

“They’ve got the best pathway, because they’ve got Arsène Wenger, who gives young players a chance, better than any other club. But the processes, and things that had just been missing over a period of years, Chelsea had steamed ahead in their recruitment and all aspects of it really.

“That gap can close. But it’s too soon to tell. The guy there … you’ll have a better idea in five years.”

His dismissal of the Dutchman continued as he said revealed a conversation with Ivan Gazidis, saying, “I told him: ‘I think you’re mad. I think you’ve got it wrong. If ever you were going to get it right, I was the best person to do it.’

“I knew the club, I knew the players that we’d got and didn’t have. I knew from under-12s right the way through.

“I went to see Arsène, and Arsène said he’d had nothing to do with it – he hadn’t signed his contract at that time. I told Arsène in the January that I would leave in the summer. He said: ‘Don’t go, I’d like you to stay’.

“But I didn’t want to work under someone else. I was prepared to do it because it was Liam Brady, but not someone brought in from outside.”

The new man has expressed his own disenchantment in recent weeks, suggesting he’s got a big job on his hands, but for all the criticism around the club at the moment, Jonker looks like a forward thinking appointment.

Time will tell, we guess.

In other news, Liam Brady’s replacement wins annual competition, in the largest city in Morocco, where participants aim to destroy each others horse chestnuts.

Headline reads: Jonker Conker is a Stonker in Casablanca.

Didn’t he win a similar competition in a borough in New York? Jonker’s Conker is a Stonker in Yonkers!

This is worth a read if you want to know a bit more about our academy, youth policy etc:
http://www.irishexaminer.com/sport/soccer/liam-brady-interview-the-kid-that-had-it-all-278965.html

A brilliant interview with Brady

Haha I read the headline and thought the same thing.

What is the world coming to?

Man who was part of stagnating youth set up, thinks he’s best placed to fix it, despite being partially responsible for that stagnation.

arsenal in crisis is still the media slant, ex employee who is unhappy at being overlooked for promotion, and refused offer to stay in the role he had, somehow turns into Arsenal appoint wrong man to head Academy job. Nothing to see here.

Me So Hornsey
Reply to  Brendan

His claim about Chelsea racing ahead of us in their youth recruitment had me digging through the archives trying to find exactly who had come through the Chavs ranks in the past 20 years from youth team to become a 1st team regular.

I found ONE PLAYER.

And that’s it. And he attacks bouncers.

And he’s a racist.

Who would sleep with his mates mrs given half a chance.

Something to aspire to I’m sure, Mr Burton.

Yeah, that Tim Burton should stick to film making and shagging Helena Bonham-carter!!!!!!!

Fuck him right in his Edward Scissorhands.

Jonkers’ credentials are fantastic (assistant coach at Wolfsburg, Barca and Bayern Munich). I for one, am really happy that we have him at Arsenal, and am excited to see what he can do.

No disrespect to Terry Burton, but there is no comparison between the two. If we are serious about wanting to produce top quality players from the youth set-up, we need someone of Jonkers’ level, both in terms of his knowledge of the game and his connections on the continent.

The simple question one might want to ask, is why didn’t things improve under Burton? Unfortunately our track record in recent seasons at youth level hasn’t been great. So it was obvious that change was needed, especially after the U21s were demoted to the second tier of the youth league. Jonker and the other 2 Dutch coaches worked with KNVB for quite some time. Just looking at the way a small country like the Netherlands identifies nurtures and promotes young players through various clubs’ youth systems, it’s obvious that they’re doing something right. Of course, time will tell who was… Read more »

Jonker, Bould, Forsythe
Fantastic CVs, but we’re not seeing much benefit yet!

Wenger “I had nothing to do with it”. Someone’s lying here. I thought the whole problem was that Arsene does do everything?

There is a difference. Players are returning faster than the speed of light. Our Academy is doing way better than previous seasons.

The Ghost of Paul Robinson
Reply to  Ant Lester

Hard to believe we’ve not yet seen then benefits of a new head of youth development appointed 3 months ago.

Sour grapes. Arsenal need some external input and new ideas everywhere from youth to seniors. New players are needed and so are new background staff at times.

Nothing already not said about a man who had reached the limits with the gap closing in terms of youth development and the other clubs.

Jonkers will need a bit of time to turn it around.

The other candidate for the job must surely be whoever is running the Southampton set up. Simply astonding the players that the Saints have produced.

Interesting (worrying?) how many different sources seem to agree our youth policies were behind the times and delivering poor results. Surely suggests significant blame lies at Liam’s door?

Sour grapes anyone? Holland came 3rd and 2nd in the last 2 world cups whilst having a domestic league that has fallen so far behind the big leagues it hurts. There are also a lot more people living in England, Germany, Spain & Italy so really Holland should be minions on am international level. The fact they are not may just have something to do with the way they teach the players so if Jonker can bring this to Arsenal we’ll be doing than we are now. Arsenal is kind of like Holland, they can’t compete with the really big… Read more »

Pretty much every boy in Holland plays football as a kid and has for the last 60-70 years. The clubs there are more integrated into society than in maybe any other country. That’s a big part of the reason Holland is so strong relative to its population. There are no real class connotations with football in Holland the way there are in most countries.

Was born a Gooner

No offense, but this guy sounds like Maureen the cunt…
If anyone was right for the job, it was was you? Nah dude, that’s just arrogance.
I cant have that near kids…
#DespiseCunts

I agree with Burton that it’s a ridiculous appointment, though Burton sounds a little bitter about not getting the job.. I’m Dutch so I know what I’m talking about when I say appointing Jonker was ridiculous, literally NO ONE over here understood this, Jonker isn’t taken seriously by anyone here. The reason he was at Bayern Munich is that van Gaal didn’t bring him with him when he went to Barça, Jonker was pissed off obviously as he thought they were mates so van Gaal promised Jonker to bring him with him to his next big job, so they both… Read more »

Tbf, I doubt the average Dutchman is any more informed than the average Englishman, and I can tell you there are MANY stupid English people who don’t understand football at all, despite claiming to the contrary. For example, over in England NO-ONE uinderstands why Redknapp wasn’t appointed England manager, it is obvious he’s so much better than Woy, who can’t even talk properly! Not saying you’re wrong as I know precisely nothing about him (other than he’s Dutch and the Dutch always seem to churn out decent young players), but coming from the same country doesn’t convey greater knowledge of… Read more »