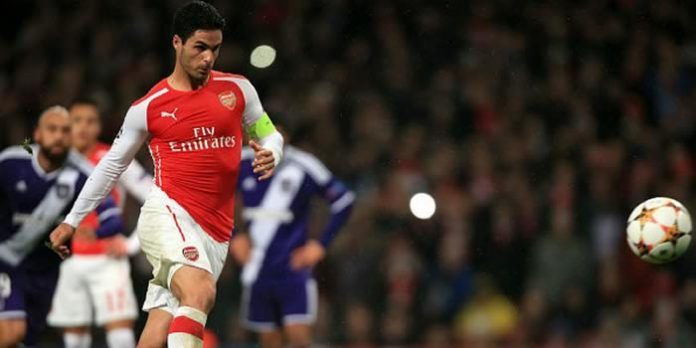 Arsene Wenger has confirmed that Mikel Arteta will mis Sunday’s trip to Swansea with the hamstring problem that forced him off against Anderlecht.

“Arteta will be out for Sunday,” Wenger told Arsenal.com. “He has a mild hamstring strain and he will be out for a short period because it’s a grade one. He should be back after the internationals.

“Jack [Wilshere] is alright, he is back in the squad for Sunday.”

Worringly, the boss played down the likelihood of Laurent Koscielny being fit for the visit of Manchester United on 22 November saying the French defender, “has a little chance to be back after the international break.”

As revealed last week, Olivier Giroud will return to full training next week and Wenger said of the other long-term absentees, “Debuchy, Ospina and Ozil are progressing very well, but of course they are not available before or straight after the international break.”

Arteta frustrated by advantage handed to Sp*rs by Uefa

No, it mother fucking wasn’t.

My name is my name

Koscielny “has a little chance to be back after the international break.”

Akarsh
Reply to  My name is my name

The “a” swings it for me: he’s got a tiny chance of being available, I reckon.

ARiddlingName
Reply to  My name is my name

If Kos isnt back for the Manchester game, Put Bellerin in the squad. Chambers in the middle with Mert.
Monreal might have been doing well against the smaller teams but no way can he face Di Maria Falcao Persie Rooney bombing towards him.
Anyway, I hate to see the team being in such a situation.
Y u do this Wenger?!

That does suggest you think Bellerin, with less than 5 games to his name, can cope with them all…

Blogs I see your point – however you play you BEST players for the position always. Are you telling my Nacho is a better CB than Chambers ? No chance. The spine of the team is the most crucial area – CM and CB. Chambers should be playing CB right now NO QUESTION. Throw either Nacho or Hector out to RB and deal with it.

I do recall a certain right footed CM playing LB as part of a defense that went all the way to the 06 Paris Final, without conceding a goal.

Chambers struggled against Hazard’s pace, he might against De Maria if played at right back. He is a better center back than right back for me. Bellerin has a better chance with his pace…

At least Bellerin is young enough to be able to follow instruction. Hopefully Steve Bould will be allowed to give him some.

bring in the younglings
Reply to  DR

Yeah I’m all for the Bellerin plan as well. But for all his technique the guy needs to bulk up a fair bit, being a defender.

Good Arse
Reply to  bring in the younglings

The lad should be trying to emulate Ivanovic IMO

What, and be a cunt?

Why not try Gibbs or Monreal on the right. Put them on strictly defensive duties and not bombing forward. That should be enough to shut up shop, if that’s possible when it comes to Arsenal.

play a back five, Bellerin, Chambers, Per, Nacho, Gibbs

with Flamini and Arteta in front

in any case, we only need Sanchez up front to score goals, the rest are just support

We are little bit fucked.

Reading about all the players coming out and saying how it was unacceptable etc is so frustrating. We have heard it all before. They need to sort themeselves out on the pitch when faced with this type of situation. Wenger doesnt help with his tactic naievity, so the senior players need to take some ownership and marshall the others. What happended on Tuesday night would not have happended with Tony Adams, Sol Campbell, or Patrick Vieira on the pitch. Im not usually this critiical of the players but Tuesday night was a joke!

Hope Mertsacker will have been over his WC blues before encounter with Man U. Currently he is incapable of defending a cross against low level strikers. Imagine a minimum-wage grocery store clerk always forget milk and poultry outside the fridge and say I cannot concentrate ony job since I return from honeymoon. Does he keep his/ her job ?

bring in the younglings
Reply to  Nacho de Montreal is tasty

Not if the other clerk on the 8 figure salary is nursing a banged up hamstring. and also you needed a better analogy.

I would put Flamini at right back. He’s shown before he’s well able at full back.

But Arteta’s gone, we’d have no holding player. Mind you, we don’t seem to have one anyway most games, so why not?

I totally agree. I previously got lots of thumbs down for saying Per has been culpable for several goals this season. You are highlighting the specific issue; his positioning/mobility when defending someone receiving a quick ball from a cross or corner makes him look so beatable. He is capable of reading the game so well and being much better than he is currently, I too hope he gets back in form.

Worrying that poultry has been left outside the fridge would make anyone play badly. Spending your entire honeymoon feeling blue in the WC would have a similar effect. Per needs to be paid more than the minimum wage – maybe then he could buy a bigger fridge.

Wenger said Koscielny would be out for a month on October 24th so there’s no way he’d be ready for the United game. I’m guessing late December. An Arsenal month is about twice as long as a normal month when assessing injuries.

Yes Giroud. Feeling optimistic about an upturn in our performances when all the lads are back.

Giroud can play centre back, yay!

So….Who had Kos out for the season in the “Defender Injury Crisis” Sweepsteaks?

This season, we MAY see a back four of… Bellerin, Chambers, Monreal, Gibbs…..

Please don’t get me wrong on this but we have two excellent full backs Monreal and Gibbs. Surely one of them could play right back. This allows Chambers to move into the centre of defence. For all my sins I used to (many many years ago play semi pro and could play left or right because I can use both feet)

It’s really a jigsaw puzzle of questions. For eg put Flamini at RB, then who plays DM? Put Chambers at CB, then who plays RB? Bellerin? Then what happens to Monreal then? Should Mertersacker continues to be selected? If not who takes over? No one? Basically the choices at the back is very limited. Whose fault? That’s debatable….but probably many will say AW. But let’s not forget we bought two arguably good defenders this season whilst we now have two first team quality defenders out injured. These are factors that we cannot ignore in the defender debate. The real no-debate… Read more »

Down under
Reply to  Nordin

You say injuries cannot be ignored in the defender debate but there is no way a top 4 premier league team in CL can last the whole season with 6 senior defenders one of whom is 19 albeit very impressive. AW recently came out and said that yes he did make a mistake and would be buying cover in defense come January. Totally agree with you on the DM we need one that adds qualities our current “DM’s” lack. As far as the media are concerned Mesut Ozil is the root of all evil in this world which is obviously… Read more »

He bought 2 good defenders to replace the 2 that left, while we were still short on numbers.

I would have preferred either Debuchy or Ozil would be the ones “ahead of schedule” to return, rather than Giroud. For all the talk about Arsenal’s strikers, I feel like this is one area that we are in a decent position in at the moment. I think we need to keep Welbz in there as our speed up front has been huge.

I think for me Arsene is getting his selections wrong at the back.

Flamini has shown he can be a versatile player in the past. He’s well capable of playing @ right back, why not entrust him with that position so chambers can move to the centre of defence. Afterall, the flamster has not been effective in the defensive midfield role this season. Maybe a shift to the right side of defence could bring back his swag ala 2006.

I love Wenger but this is depressing. Koscielny has a LITTLE chance to be back after the international break? Mark my words, he will be back in January and then Arsene will say “He is like a new signing.” FUUUUUCK

I think Wenger has a bit of a conundrum between selecting either Monreal or Calum next to Metersecker. One player is trying his best but is out of position. The other has little experience. I think the thing that swings it in favour of Monreal is the fact that if Wenger plays Calum in the middle, he has to bring in Bellerin at RB which means two inexperienced players on the right flank. Most likely he will stick with Monreal. I don’t think he wants to tinker too much as we are already having issues in the back 4 through… Read more »

When I look at the list of injured players returning or about to return, I realize that Arsene is on the brink of building a great team. I can just feel it. We are 2 players short. I can boldly say that if the manager can get a CB and a DM between January and summer, we will be strong contenders for the title and also have and outside chance in Europe. Check out a first team of: Sczeszny Debuchy CB Kos Gibbs DM Ramsey Ozil Walcott Welbeck Alexis. Bench Ospina, Calum, Mert, Monreal, Ox, Wilshere and Giroud. Cazorla, Bellerin,… Read more »

I am willing to discount this season as the final rebuilding season.
CL qualification ( not qualifiers) and an extended FA cup run and a pleasant surprise in the CL ( beat our 2nd round opponent) is okay for me this term.

team selection will be interesting this weekend as our attack is finally starting to click. although i doubt wenger will start theo, a front line of welbz, ox, alexis and theo would be interesting. with alexis looking strong in the middle maybe start jack (in place of out-of-form ramsey), but keep him in a deeper role alongside flamini. he plays deeper for england and seems to do well. with so much pace up front it could take some pressure of our defence. i think keeping 2 midfielders back in a 4231 would help a lot. we don’t have a strong… Read more »

The boss talls about the long term injuries, but didnt mention Diaby? Has he been put on a class of his own (perma-crock) or has it become such a given even the boss didn’t bother mentioning?