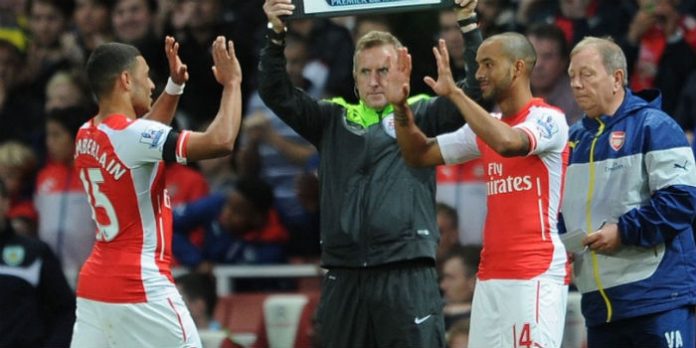 Hopeful that the 25-year-old won’t suffer any setbacks after nine months on the sidelines the boss suggested that the winger could benefit from a call-up to the England setup next month, so long as Roy Hodgson treats him with caution.

“Hopefully Theo will come on and have no setbacks now, but we always have to be cautious. The battle is not won yet – at nine or 10 months out, you have ups or downs and I will have to manage that well,” Wenger said after Saturday’s 3-0 win over Burnley.

“If he wants to go [with England], I am happy for him to go and train, and maybe get a few minutes.

“I am happy for that because it will help his development. Is he completely ready? I think it is a bit early, but to be in the squad would be good for him.”

Should Walcott get the nod he’d join an ever-growing band of Arsenal brothers in the Three Lions set-up with Kieran Gibbs, Jack Wilshere, Calum Chambers, Danny Welbeck and Alex Oxlade-Chamberlain all featuring last time out.

The latter, a close replaced by Walcott at the weekend, said he’s overjoyed to see his close pal get back in the groove.

“I’m absolutely over the moon to see him back,” the Ox told Arsenal Player. ”He’s been a massive part of my career since I’ve been at Arsenal and a big inspiration for me as my mentor, so to see him injured for as long as he was upsetting and disappointing.

“What was better than that, though, was that I saw how professional he was throughout and how positive he stayed, so there’s nobody that deserves success more than he does.

“I’m really happy to see him back and he deserves every success in the rest of the season. I’m sure he’s going to help us.

“We’re coming towards a busy Christmas and New Year schedule where anything can happen. We’ve got a lot of games coming up and we’ve built up a nice bit of momentum with a few good results, so we need to keep building on that.”

Arseblog News hasn’t ever managed a real life football team or had the responsibility of overseeing the rehabilitation of a top athlete, however, we reckon Theo would be much better served by sacking off the chance to play Slovenia and Scotland in favour of a week in bed, chilling to the sounds of mating dolphins with regular cups of lukewarm hot chocolate for comfort.

You know….as far away as possible from cunts like Charlie Adam.

We will have the fastest attacks in the world. Just a shame that Özil is injured.

I quite like the thought of Walcott and the lads playing keep away while Rooney, breathing with his mouth open, watches with a feeling of incompleteness.

Is that a long winded haiku
?

Walcott getting selected for england the moment he can tie up his bootlaces is perhaps a strong indicator of what is wrong with english football and the celebrity over capability that has hamstrung the national team for 20 years. Theo has done nothing in the last 9 months to merit a call up, whereas the guys who filled in for him have. Its not as if he is the outstanding striker of his generation and it actually demotivates him if he can walk back into the arsenal team and the english team straight away. I’d rather if he had to… Read more »

Thank you for your input, O world-leading football manager and psychologist! A certain Lord Bendtner needs your services in Germany.

JACK IS A GOONER

Theo Theo Theo !!! The fastest player in thE Bpl !!

He should definitely not play for England in the upcoming internationals. With our luck, an injury would be inevitable. He should take it easy and get back to 100%.

Was born a Gooner

He needs to play competitive games to build up match fitness otherwise he’ll be useless for us. Half the time people just talk about resting a player for the sake of it when actually the quicker we can get him up to speed the better it will be for our season. What’s the point in having a player if you don’t play him or only sporadically because you fear he’ll be injured all the time. He’s been out for 9 months so will need to get back in the groove and the international games will be of a better standard… Read more »

“…we always have to be cautious. The battle is not won yet – at nine or 10 months out, you have ups or downs and I will have to manage that well.” He is coming back from a very serious injury. These people know what they’re talking about, they have the experience. If they say he needs to be eased back, and he need to be patient, then that’s what it is. And when you rush him back because you believe we are desperate to have him back, and he get’s injured again, then the knives will really be out… Read more »

Great seeing Ox grin as Walcott came on , love it.

Good to see the Arsenal represented in plenty in the national team, after that being used for years so a stick to beat AW with.

AW seems to making a conscious effort in helping the national team and improving Arsenal’s contribution. I’m sure the media will keep mum in this point.

oh geez, interlull be kind to us!

Who’s the twat with the electronic board giving The Ox the evil eye?

“Great seeing Ox grin as Walcott came on , love it.”

Much better than the increasing number of arrogant prima donnas who have a hissy fit when they’re subbed and ego’s bruised.