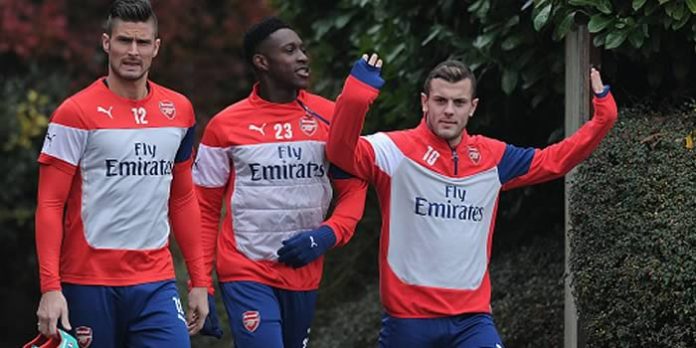 Arsene Wenger says the amount of offensive options Arsenal have right now will mean that there’s going to be a fight for first team places.

Olivier Giroud returns to the squad for the first time since August and last year’s top scorer faces a challenge from new boy Danny Welbeck. Theo Walcott, despite a small groin injury, will be back in regular contention soon and Alexis Sanchez has been the Gunners stand out player this season thus far.

The challenge for Wenger is how to fit those players into his team, and although the return of last season’s top scorer might shunt Welbeck out to the left, the Arsenal manager has backed him to make an impact if he is asked to play there.

He also made it clear there was no agreement in his purchase which guaranteed him a central striking position.

“That was not a condition,” said Wenger. “You have players who play on the flanks who score goals. I don’t think that will stop him from scoring.

“Cristiano Ronaldo played all his life on the flanks and scored more goals than games he played. What is a problem for him is to play. He is adaptable – the modern player is adaptable.

“It is so important on the flanks to have pace and work rate, that sometimes in some games you have to put them there because they can absorb the quantity and the quality of the work.

Wenger played down suggestions that it was a one or the other situation with regard to Welbeck and Giroud.

“Welbeck can play in different positions up front and there is room for both of them to start in some games. Of course it is a fight. There’s always a fight, because we have a lot of offensive options.”

Meanwhile, if the former Man Utd man needed any more motivation for tomorrow’s game, comments from Louis van Gaal will have provided that.

The reason the lifelong United fan wanted to leave was because he felt he wasn’t being given the opportunities he deserved, and being dismissed by a manager who knew him for just a couple of weeks should have him fired up nicely.

Van Gaal is pathetic, how can you critisize a player that has played his entire career out of position?

He is obviously trying to label him “not good enough” to ease Manchester fans’ outburst.

Van Gaal is a massive c*unt. Show him up Danny. COYG!

I’d prefer it if Wenger would choose the forwards tactically now that we have a wealth AND variety of attackers.

I doubt there will be any more competition upfront than it is in midfield. Close to none in other words. Whoever Wenger favourites will play regardless of effort or performance. Plenty of players on our bench who have deserved a chance they can do better with some of the horrible petformances our first 11 have delivered so far this season.

As much as it pains me to say it, Vaan Girl is right. Welbeck isn’t as good as Rooney Falcao or even that Dutch cunt (when he’s up for it).

We’ve seen it ourselves, 2 goals in 8 PL games is not good enough to justify starting Welbeck at CF. His work rate off the ball is great but he needs to improve his finishing if we’re to win anything with him as our main man.

20+ goals from Theo, Alexis and Giroud means we have a potent forward line and Welbeck will be a decent option when needed too.

In what way is it rubbish? 2 goals in 8 games, against the teams we’ve just played, from our CF can in no way be considered good enough. At that rate he’ll do well to get 10 goals in 38 games.

Down vote me all you like but you can’t argue with the facts.

the only sam is nelson
Reply to  Hurensohn

it’s rubbish largely because you’re being partial in your choice of facts and ignoring European games. Overall Welbeck’s scoring record stands up with most strikers who are seen as effective and overall he’s scoring at twice the rate he did whilst at Man Utd under what many would regard as the superior tutelage of Sir Alex Ferguson

so, the facts (unless you ignore the facts that include the games where Welbeck scores) show that he’s pretty decent. And for £16m it’s a no-brainer, a cracking buy.

He needs time to prove himself but Man utd’s three haven’t exactly been brilliant this season either. Personally, I feel that Welbeck needs to be a little more aggressive with his runs. He makes space for other people very well but he also needs to be more sly and make it easier for people to feed him. Walcott does that perfectly. He also should take more risks in possession and drive at defenders. I didn’t realise how good a dribbler he was till he came here, but he needs to use that asset more!

He’s what, 23? With a ton of potential. Tall, fast, and can dribble. There aren’t many players with those attributes. When players like that mature and start scoring tons of goals you can’t buy them. He was a very smart signing.

Did you factor in the fact we have been playing rubbish and that consequently has effect on players (Sanchez is an exception not an norm). We need to give him a platform to score the goals. That means provide through balls, accurate crosses etc. Anyway, he has scored in CL and International games during this time too. He made some goals as well. Not bad.

Yeh, I did. Sanchez is the exception in our team, because he’s a world class forward and Welbeck isn’t (not yet at least).

He’s been missing plenty of chances so it’s not like you can claim the service isn’t there.. As for getting goals in the CL, He scored 3 against a terrible turkish side and missed 3 good chances in Germany. You might see that as a positive but I’m not sure it is really..

You forgot Welbeck scored three goals in four games in champions league for Arsenal. Five goals out of twelve games reflect more his performance for Arsenal. For me, Welbeck is victim of his high workrate. He is always wrestling to get or keep the ball while others are running off him wanting the ball to score. By the way, do you know his goal return for England this year ?

Let there be blood!… Figuratively speaking of course. The players dont need any more help getting injured.

Welbeck does what Podolski was braught to the club to do, play anywhere across the front.
Welbeck might not make as much impact as Podolski but across 90 minutes I’d take Welbeck every-time, he’s a very useful squad player.

Anybody that believes Poldi can play ‘anywhere across the front’ is completely delusional. I agree with the rest though.

I’d take welbeck for the hard work but Poldi for the goals any day. Don’t make it look like some players are useless
#squad #rotation#tackticks #red army #power #aha

Moxxi, I agree with you Wenger has his favorite players he doesn’t base them on performance. If not Cazolar this season has been awful hence he still have the chance over Rosisky. In case of Oliver Wenger will prefer him ahead of Wellbeck. Let be patient and see maybe what i’m saying is write or wrong.

Perhaps you might want to consider that AW’s decision to ‘favour’ certain players is based on his actual knowledge of them formed on the basis of working with them day in day out?

I wish I was Wenger’s favourite player.

Sanogo our top choice central forward the rest of the season, no doubt.

Wenger is ready to auto select Giroud again…I doubt Welbeck will have much of a chance starting when theo, ozil, alexis and ox are healthy…he’s no better than those guys on the wings and with Giroud guaranteed a place, Welbeck is our next podolski….and podolski will be the next Park chu young/Chamakh

Wenger do mpt destroy Welbeck like tou have Podolski. If they are central strikers let them fight for their place. Don’t play players out pf their position just to acvomodate everyone FFS. This is why we are so disjointed this season.

2 goals in wellbeck’s FIRST 8 games… Many a great striker started with similar records for new clubs, give the man time.

Personally I will be very disappointed to see wellbeck out wide. He does a job there but we have much better options like theo, alexis, ox.

If we stopped both our full backs bombing on simultaneously and sorted out a top notch DM who can cover the ground, we wouldn’t be so reliant on our wide man having to do so much defensive work.

Wellbeck or giroud all day for me unless we go with 2 up top.

Yeh, his first 8 games for us, but not in this league. He shouldn’t need the luxury of a ‘settling in period’ like say, Henry needed, he’s been playing in England all his life. The point in buying him was to get a player who could come in and do a job immediately and it’s not like he hasn’t been getting the chances either.

He has a lot going for him and one day he may well be a top player for us but for now he’s not doing it, sooner we get Ollie back the better.

3 goals in 4 games in CL for Arsenal and top goal scorer for England. You don’t know what you’re talking about or you conveniently select the fact you like to consider.

How good would it be if Welbz got a hat-trick today?!!

FFS! Wenger already made his mind up when he signed Welbz, for now he can play but when Giroud returned he would be pushed out. Welbz stated that he wants to play up front. I can see frictions occurring.

‘Forwards will have to fight’ – Wenger.

‘First give me a chance’ – Podolski.

I wont mind seeing Welbz, Sanchez and Giroud in the starting XI.

Welbeck up front over Giroud any day. Quicker, faster, more exciting. My biggest disappointment with Le prof has been his failure to give Campbell a chance.

coyg NOT WENGER
Reply to  Rudeboy

He has not yet given Podolski the opportunity to prove himself either, lol..

But I agree, keeping Sanogo on the bench but not Campbell is an absolute joke..