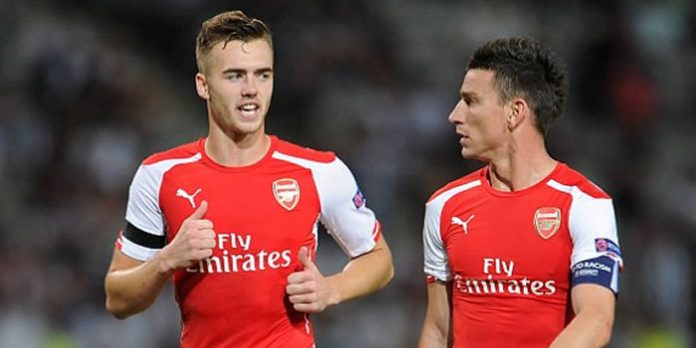 Arsene Wenger says that Laurent Koscielny is ready to start games having missed over 6 weeks with his Achilles problems.

Asked at his press conference if the French international was capable of returning to first team action, Wenger said, “If I want him to start, he will start.”

He then expanded on the qualities the team had missed in his absence, saying, “He’s got a good partnership with Mertesacker, he’s got pace, he has a great interception rate – he gets in front of opponents – and the quality of his passing as well.”

And although he and Per are the main men, the Arsenal manager hinted he would be willing to mix things around if need be.

“He can be partner with Mertesacker, with Monreal, with Chambers, I don’t rule that out. When Debuchy comes back we have choices.”

The former Newcastle man is doing ‘very well’ according to Arsene Wenger, and is expected to be available again in two weeks, with the game against his old club on December 13th the most realistic return date.

With the respective current form, I ll retain Monreal at CB and drop Per for Kos

Ya and take Alexis off as well. He only scored one goal against Dortmund

For an untested partnership, half of whom aren’t a natural centre back? Per has shortcomings, yes, but isn’t the beauty of the Axis of Awesome that they offset the other’s weaknesses and compliment their strengths? No disrespect to Monreal, who has done a solid job in a rough patch/position, but surely Mertesacker and Koscielny must start if both are fit?

Im a big fan of Per. A big admirer. Monreal was hardly responsible for any of the goals we conceded. But Per is a bit short of confidence and form right now, in my opinion. He is caught out of position too often. May be he ll regain the form when Kos returns, but Per is going through a serious bad patch right now!

I reckon Per could do with a rest too, having said that he’s looked noticeably better since the Internationla break though, maybe recharging the batteries means we need to keep him there for now, but he needs the odd game out as he’s not so young and not so athletic. I still wouildn’t play Monreal at CB, unless we were absolutely desperate, then again I’d have brought Bellerin in and played Chambers at Cb rather than have him start there…it isn’t the root of all our problems but having someone who isn’t naturally a CB play there is dangerous and… Read more »

“but Per is going through a serious bad patch right now” – after losing his regular partner and having to marshal a makeshift back four with an inexperience right back and a left back turned centre back with zero protection from the midfield in front of them, i’d say he’s done pretty well.

Well said. How is Stoke City doing these days? You’ve managed to change some of the culture of Tony Pubis.

I would say Monreal was partly to blame for Anderlecht’s 2nd and Swansea 2nd goal. Swansea goal the player went past him too easy but Flamini should have been stronger too. His lack of aerial ability for the Swansea goal. Still it is because of being played out of position.

Monreal isn’t great in the air. That’s his major fault. And you can’t really put too much blame on him individually for that. It’s not his fault he isn’t 5 inches taller and 30 pounds heavier.

Other than being beat in the air he’s done really well as a CB.

No, he shoulders none of the blame for the situation he was in, but it was due to him being there that we ended up conceding a few more than we should.

His positioning hasn’t been brilliant at CB either and he also hasn’t shown the right kind of reactions and instincts for CBs, no harm in that as he really isn’t one but to say that he has done well is plain wrong imo, just that he did as well as could be expected.

Yes.. but we need to start researching ways of cloning another Koscielny. Imagine two of him at the back!

Once we work that out… we can move onto a few Henry’s, Bergkamps, and throw another Alexis in!

But that’s the thing: while I’m a big fan of Koscielny and think he’s a fantastic (and really underrated outside of gooner circles) defender in his own right, he’s better with Mertesacker, who takes some of the bonkers out of his game. Not so much that he becomes overly cautious, and we know he still has the odd red card in his locker, but enough so that he’s more effective than with another, more unfamiliar player. They have that understanding that great partnerships are made of.

Kos is my favorite arsenal player. His strengths: Pace, anticipation, passing, Man-marking and focus(most defenders have this but he is intense). Weaknesses: A decent number of forwards are much stronger physically and I believe that he cant really bully them in the air. Thats why Mertesacker works with him. When the forward is a little stronger, Kos will still stick to them and do his job. However, if you have a tall player like Hummels(not gonna happen, just an example) that’s fast too, Kos will not have to make as many recovering runs/last-ditch tackles and I’m sure that his red-card… Read more »

You don’t want 2 kosienlys partnering each other. He has very similar attributes as Vermalen and that partnership was a disaster because they didn’t fit.

I dunno, I don’t think it would take too long for two versatile defenders to forge a partnership, and Kos is versatile.

Winston Reid is a clone of LK

Yep. Per’s always been a limited but potentially great defender. If you look back over his career with a good partner he is a rock but without a good partner he’s a disaster. The same thing was true at Bremen.

I have to disagree. I think that Monreal has played well when asked to play at CB but for me it has to be Per and Kos all day long if they are fully fit.

Got to respect the way he’s gone about his work.

Last couple of games he’s out performed the world cup winning CB sat next to him. Can’t say more than that.

Sagna was 5’9 but had the leap of a Salmon escaping the jaws of a bear.

and a body that ludvine’s(gulp!) deserves

That French recovery power! They must have been drinking from Asterix’s cauldron

Technically it would have been Getafix’s cauldron. 😉

Glad I wasn’t the only pedant to think that…

I’m trying desperately to avoid doing any work in my free afternoon. Double checking childhood references is an awesome way to procrastinate, even if it makes one look like an insufferable bore 😉

Koscielny back and Henry mulling a return of some sort. Happy Friday, gang.

Wish Wenger could push Chambers to DM,Montreal to RB and restore Per -kos partnership

Monreal at RB…. give the guy a break!

Poor Monreal. Moved to an unfamiliar position to then moved to the opposite side, where being incredibly left-footed would leave him exposed on that side.

and to top it all off you call him a Canadian city, the guy has had enough…

At least it’s not a particularly bad Canadian city (except for their hockey team). It could have been Toronto, and that would have been truly awful.

I laughed abit too much at that.

Don’ t think it matter so much anymore. As so many teams – including ourselves with sanchez- play a right footed player at left wing. Who cut inside making it in facr easier for monreal.. See azucotidiot at chelsea right foot playing lb

We haven’t been defending well at the best of times this season, so I don’t think our right full back cutting in is a good idea…

With Arteta out for 8 weeks, as soon as Debuchy returns I think Wenger will ‘fast-track’ Calum Chambers into that DM role… about a year earlier than planned.

Flamini can’t play every game between now and February. And relative to Flamini what Chambers lacks in experience he makes up for in superior physical presence, and pace.

So until February, the ‘2’ in the 4-2-3-1 protecting the back four could be Flamini-Ramsey against Bottom 12 opposition, and then Chambers-Chamberlain (ie ‘Chambo-Chambo’) against Top 8 opposition.

So are Dortmund in the ‘bottom 12 opposition’ bracket?

So you want two inexperience players playing the central midfield role against the top 8?

can’t we recall Jenkinson?? to play at RB, so Wenger can play chambers in the middle.

*He’s on a season long loan, which may or may not have had a fee, and Wenger has already said he won’t be recalling him.

Great news with Koscielny. What we need is a more solid partnership at the back. MOnreal has done a tremendous job in an unfamiliar position and was great against Dortmund, but one would hope the more familiar partnership of Meterscielny will give us a better spring board to capitalise on our attack to the end of the year. The worry of course is that Wenger will once again feel we have sufficient at the back and not add in Jan. I certainly feel with the early return, it is slightly less priority if we do not find the quality we… Read more »

Khedira is not a specialist DM by any stretch of the imagination. He hardly tackles. You can look up the numbers, he’s not very active defensively at all. You can say he makes up for that somewhat with intelligent positioning and that’s not untrue but he’s still not anywhere near a dedicated DM.