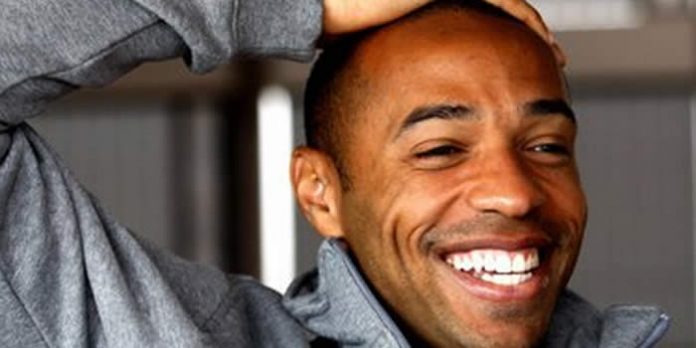 Having announced his retirement from football and his move into the media with a job at Sky Sports, the latest in our Thierry Henry series brings you some little known facts about Arsenal’s record goalscorer.

We all know the stats, the figures, the main events, but what about those bits that aren’t so well known? Here we go.

1 – After moving to Juventus, Henry was having a hard time adjusting to Italian football. Four months into his tenure there he met Arsene Wenger on a flight to Paris and told his former Monaco boss he’d love to join him at the Gunners. When Nicolas Anelka was sold to Real Madrid in the summer of 1999, Wenger remembered that conversation and paid the Italian side £10m for his protege. It worked out quite well.

2 – On his arrival at Arsenal he found himself welcomed to proceedings in his first training session by Martin Keown who thundered through the back of him in typical Keown style. When Henry remonstrated, Keown just held a ‘Shhhhh’ finger to his lips and said, “You’re my wife now, Dave.”

3 – Danny Mills was so upset by Henry nutmegging him at Highbury that he wrote the Frenchman a letter, on headed paper expressing his pain and dismay. Henry just laughed before showing it to everyone.

4 – Rumours of a poor relationship with Jose Antonio Reyes abounded as the young Spaniard struggled to adapt to life in England and English football in general. However, after he’d been kicked around the Old Trafford pitch by the Neville brothers, Henry stuck up for his teammate by cornering Phil Neville in the tunnel and giving him a Chinese burn which took three weeks to heal, before threatening a fleeing Gary with a wedgie he’d never forget.

5 – Before he moved to Barcelona in 2007, Henry had been relentlessly pursued by an infatuated Joan Laporta, then President of the Catalan club. As an attempt to lure him to La Liga, Laporta had a local artist, Jordi L’aforj, paint a portrait of the Arsenal striker astride a massive horse galloping down Passeig de Gracia carrying a pig’s head (a nod to the Barcelona fans ‘tribute’ to Luis Figo).

Henry gave the painting to kit-man Vic Akers who, in turn, donated it to an Oxfam shop.

6 – Despite Arsene Wenger’s insistence on a balanced, plain diet, Henry would munch his way through half a packet of Jelly Babies before each game. He always bit the head off first.

8 – One night Thierry Henry was out for a walk during his summer holidays and he encountered an angry bear who could easily have torn him to shreds. Instead, he put his hands on his hips, raised an eyebrow and gave him the patented Henry scowl before saying “Go home bear” and at first the bear moved to go home but then he came back and he and Thierry became friends and he called the bear ‘Constable’ after his favourite painter and his second favourite rank of police officer.

9 – It’s well known that he would often phone up journalists to challenge them on things they had written about him, but very few people know that when he saw the fourth Indiana Jones movie he called up George Lucas and said, “What have you done? What have you done?”.

Lucas, literally, had no answer and hung up.

10 – At night, Thierry’s statue outside the Emirates comes to life and moves faster than the eye can see around the streets of London. Eventually it will find what it’s looking for – the house of a Sp*rs fan. It will ring the doorbell, then assume position so when the Sp*rs fan opens the door or looks out his bedroom window he’s greeted with the sight of Henry celebrating that goal.

He then winks and returns to his plinth before anyone notices he’s missing.

Haha I never know when to take you seriously or not…

Rushed to open the blog to find the 10 i would add to the ever growing list of things i love about this legend only to find mr blogs at his best.

How many are true? Surely not number 8 &10. Maybe none apart from 1 or
maybe none at all.
Who cares. Give me 3 pts on Sunday; that’s all I care about.

Number 10 is true though.

Absolutely, Although thinking about number 10.

If he finds a particularly delusional Spurs fan, does he touch them and send them back to the 1960s where they fit in?

In fact if he finds a particularly delusional Spurs fan, he touches them and sends them back to the 1960s where they fit in.

Papa Lazaro
Reply to  The Only Olivier is Giroud

Give me your ring, Dave.

TRUE HENRY FACT, as told by my mate who met Danny Mills at a thing once:
Not sure if it was in ‘that nutmeg game of lore’, but in one particular game against ‘boro, Mills was given the task of man-marking Henry. About five mins into the game, Mills goes in with a typically ‘committed’ challenge and ends up with a fist-full of Titi’s shirt. Henry’s response, served with a predictable withering look was, “Don’t touch me, you’ve achieved nothing.”

number 10 had me laughing abit too much… Ok, all of them perhaps…

number is two is the most obviously true one.

Nice one with The League of Gentleme reference.

1a : lacking the human power of speech b of a person often offensive : lacking the ability to speak 2: temporarily unable to speak (as from shock or astonishment) 3: not expressed in uttered words 4: silent; also : taciturn 5: lacking some usual attribute or accompaniment; especially : having no means of self-propulsion 6a : lacking intelligence : stupid b : showing a lack of intelligence c : requiring no intelligence 7: not having the capability to process data — compare intelligent … because surely Finsbury Park Gooner meant to write that this post was brilliant and simply… Read more »

I just think reading some ACTUAL facts-I-never-knew about The King might be a more rewarding way to spend 5 minutes.

Perhaps on the Mirror? Their unknown facts are usually very good and just as likely to be true.

This is great. LOVE #10. Here’s one more “fact”: Thierry Henry (and AW too) made me fall in love with Arsenal. I’m an American Gooner who had no regular access to Arsenal matches until the late ’90s/early ’00s with Fox Sports World. Over here, since there’s no regional affiliation with any team, we always say that your favorite English team to support chooses you, rather than the other way around. Well, the first time I watched Arsenal play (after having seen a few matches of Beckham’s Man U, Shearer’s Newcastle, etc.), Thierry Henry and Arsenal chose me. No one played… Read more »

Thanks, glad you liked it!

Great comment Sanjeev. As an American Gooner with a similar experience, I can safely say that Thierry Henry is not only the reason for my Arsenal fandom, but he might be the reason I fell in love with football in the first place.

Fans getting along great with one another. What a breath of fresh air !

Cheers, the same happened to me while I was living in Panama. Arsenal and Henry chose me, end of story.

This is why I love this site.

Pretty much the same for a young man growing up in post-apartheid South Africa… My friends british dad made us watch every blackburn game.but they were decidedly shite..and after Man untds media blast in the 90s, thats all I knew about footy down here at the tip of Africa. But when Henry scored THAT goal vs Man Untd in 2000…I had no choice. Arsenal and Henry made me a Gooner. Love you all.

i’ve just seen an old interview that AW gave where he confirmed the Paris flight conversation, and he said he told TH that if he was patient he would take him to Arsenal and turn him into a CF. therefore #1 is true. Love the league of gentleman ref, “you’re my wife now, Dave”.

Sometimes in football you have to score goals

I’d prefer real facts to be completely honest. The first is true but then it’s just like ok … oh this is a joke one etc.

Still love you though.

Lucky for you these are fake facts then 😉

Are you sure Blogs? Because I swear I met that bear a couple summers ago while hiking, he saw the Arsenal patch on my pack and called out to me. We sat a while on a large rock chatting and shared some jerky. The fact I had been ingesting mushrooms for days prior surely is unrelated.

The bear is really. Thierry’s encounter with him might not be.

Or is this just a cunning double-bluff on my part? I guess we’ll never know.

You mean the one about the statue is false?? Shame on you I believed that one 🙁

Wait, I just saw the whole jelly babies point in my local newspaper in India.

Please let this be true.

You then wonder why Danny Mills hates Arsenal. That one had me in stitches.

When he came back and scored that goal against Leeds, in typical Henry-style…my tears were just pouring down! 🙂

Now if you come on down to Highbury
you can see Thierry Henry
He is the best player you will ever see
Thierry-erry Henry!

Best player in the history of the BPL. Fantastic player 😀

Damnit, well I posted the damn thing twice. More may appear later. My fault everyone.

Brilliant. Thank you Arseblog.
Let’s all raise a glass to Theirry Henry. The Rampant Rapier, the Spudcrusher, the Fleet Footed Finisher, The Invincible Assassin. Titi.
Oh, and bonus points for using the word ‘plinth’.

i want to write a book

Alexis can learn by watching videos of the Master, dealing with a bad tackle.
He would gracefully get to his feet, shrugging his shoulders. Like “what was that all about little man”?
The poor fellow who made the tackle, would then crawl off to his slug infested lair, unlikely to be seen in the game again.

Thierry Henry, who do you love?

His response to this was (in my mind) was always Glaswegian.

I love my wife, my weans and my dug 🙂

Arsenal ledgend to sky sports pundit via a little hol stateside. How the mighty have fallen. Love T and count myself extremely lucky to have seen him strutt his stuff. One of a kind.

All of these are true apart from number 2… I mean, do you really expect us to believe Danny Mills can write? Seriously!

He can’t write
I can’t count

Read today’s times of India … Ur no. 6 makes it there in the back pages!!

Please send me a picture if you can!

The earlier link leads to the main paper rather than the article. It’s on page 34 in the table of contents.

Journalism. Quality fact checking all around.

That is truly amazing

TH14 thanks for everything! There never would be another one… G.O.A.T.!True Legend!

Did a stint once as a junior researcher at MTV some years ago. I was asked to go and pick up a few comments from Thierry at London Colney about the up coming Euros in Portugal for a news item. Was hard enough keeping myself together walking around the place and spotting all my heroes but then met him and he professionally and patiently just answered all the questions I had for him. At the end he said “you’re a Gooner aren’t you, I can tell” (was a i grinning too much or something) he then took out a football… Read more »

Obviously everything is true except 1.