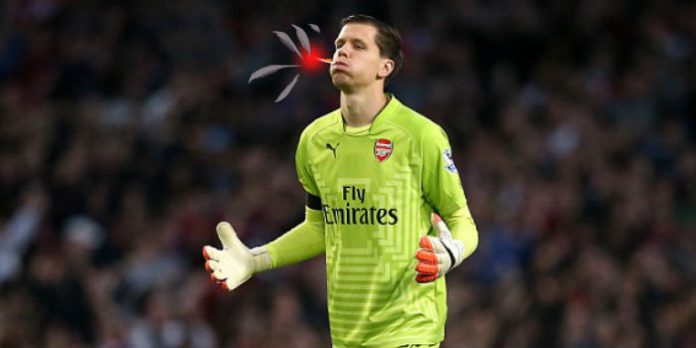 Both the Mirror and the Guardian report this morning that Wojciech Szczesny has been slapped with a big fine after he was caught smoking in the showers at Saint Mary’s in the aftermath of his disastrous performance during the 2-0 defeat against Southampton.

On one level it’s so ridiculous, it’s almost hilarious. But it would appear to indicate a more serious issue. Something has gone seriously bong.

Getting caught with a cheeky grout in your gob while you’re pretending to be Hugh Heffner on a night out at Chinawhite is one thing, thinking you can get away with such behaviour under the nose of the management team and your fellow teammates is quite another.

But then, maybe getting caught was the point? Perhaps it was a self-destructive John Bender-esque display of petulance at the end of a bad day highlighting the troubles of a guy who is probably not the cock-sure character he enjoys playing in public.

Either way it appears to have been the straw that broke the Camel’s back. For his cheeky puff on a Benszczon and Szczedges, his Szilk Cut moment, his lighting up of a Lucky Sztrike, his Szczigarette, his Sznout…he’ll be filling Per Mertesacker’s fine jar with an extra £20,000.

You can’t help but feel he deserves it. All eyes now turn to Sunday and whether Davidoffspina continues in goal against Stogie City.

For what it’s worth, Arsenal denied yesterday that Szczesny’s indiscipline, as publicised by ex-Gunner John Jensen, stretches further than this incident.

remember the invincibles
Reply to  CB

Very Bizzare . How do you smoke Szciggeretes in the shower ,how do you even light them ? who snitched on him ? was it Ospina ?

I’m more worried about who felt the need to leak it to the press, than his actual smoking.

Doesn’t have to be us who leaked it. Maybe someone at Southampton did.

I’d be more worried that my goalkeeper was so rattled by his performance that he needed some sweet nicotine straight away, smoking in the shower? (and enough with the while showering silliness).

If I were Wenger/Bould I would be seriously worried about Szcz’s mental state, much more than of Wilshere having one at a nightclub.

I remember when ice hockey player Guy Lafleur used to smoke between shifts in the tunnel beside the bench. My oh my, times have changed, haha.

The Ghost of Paul Robinson
Reply to  CB

Explains why he was rushing out – to buy some darts.

Sucking his water bottle then a fag, sounds like a deep psychological issue.

Me So Hornsey
Reply to  CB

I’m convinced now it was almost certainly a Polish Wodka he was swigging from that water bottle.

Agreed – I mean, who even tries to sneak a smoke in the shower?! It’s just not a thing & so he probably wanted to get caught.

Like blogs suggests, I think it is some self-destructive behaviour that is the result of him feeling something a lot deeper than just what happened on the pitch. Need to watch the boy here, make sure he’s alright on a personal level – something Wenger’s always been good at so I’m sure he’s all over it.

Surely, after his second balls-up, he should have (rather than having a swig on the water bottle and a fag later) lit up a Hamlet whilst the PA system played that classical piano piece that used to feature in the ads (Beethoven?)?

Bach. Reinterpreted in a jazz stylee by Jacques Loussier.

They're Building A Bendtner

If he wanted to get caught he should have just lighten it out on the pitch! Instead of grabbing his water bottle. Imagine the scenes…

I’m glad he was punished, I have a feeling he Mayfair well from such a fine.

“wherever” would be a better adverb seeing as he lit a fire under the shower.

As Blogs said today, how does smoking in the shower actually work? I thought fire and water don’t get along.

If we’d won and he was smoking a big fat cigar….Wenger wouldn’t have done anything!

I think he was angling for the davidoff cologne reference rather than cricket.

It’s not what you’d expect from a John Player!!

What do you think they’re smoking over there at the Emirates?

Can you blame him? If I had to play behind the defence he’s been made to I’d be smoking something too.

lol…very funny, even if i dont agree with your comments

the spurs and Mu defence is shit tooo that hasnt stop LLoris/DeGea to give great performance and save their team..

In the time-honoured British tradition, I am convinced that if one goalkeeper is smoking then they all are!!!

Send them back where they came from. Let them do their dirty smoking there. (In the Academy)

We don’t need goalkeepers anyway! They’re just taking the place in the team that one of our brave smoke free-Defenders could have.

Ridiculous. Enough of a cherry in top of his recent performances onfield to give right arm Offspina a chance to make the position his own.

I still don’t understand how the media can get hold of this? Some shit that happened in the dressing room?!

Whoever’s leaked it, if true, would surely get the BFG’s shattered fine jar shoved up their arse!

No smoke without fire….

No smoke without fire….
No fire without matches….

If we stop him playing matches he will have no option but to give up smoking. It really is that simple. Why can’t Wenger see this???? #Wengerputitout

Wenger losing authority? There was a time when he demanded his players to be 24 hour athletes. Allthough a keeper smoking is not as bad as an outfield player, but there is a reason why olympians in individual sports dont touch smokes. when you train as much as a proffesional athlete, then why would you use a substance specifically designed to tear down that which you work so hard everyday to improve. And when you bring cigarettes with you to an away game and light up in the shower, then you know he is a full time smoker, and its… Read more »

Smoking is one thing. Smoking right under the management’s nose is another thing.
But, isn’t such a news about smoking in the shower which is known to only a few people getting leaked to the media so soon an even bigger concern? I’m just curious. I don’t how the news leakage work in England, but just curious!

The leakage usually happens in the shower if someone forgets to turn the tap off fully.

It’s a well known football problem. It’s called “tapping up”, or so I understand

In the shower? Really? That is unbelievably daft.

Relax and have a fag Chez. Sure it was only 3 points against Southampton. What’s the big deal?

(Ospina in. He’s the better keeper, and way more mature than Chez. Enough of indulging this stupid childishness. Being between the sticks at Arsenal is a man’s job.)

don’t care if he smokes. There have been some great players who’ve smoked. I do care that his crazily bad judgement extends to thinking you can successfully light up under a running shower. I also care that he’s not a good enough keeper for the Arsenal.

Absurd and unacceptable behavior obviously by the club’s standards.

Have you been playing with Wilshere, young man ???

GunnerDareMACEDONIA
Reply to  Nationality ? a Gunner

Maybe he found Jack’s hidden ciggs in the shower .

I imagine most of them are constantly
getting caught smoking. I’m sure Steve Bould spends half his life checking behind sheds at london colney

I’ve tried smoking in the shower once, it didn’t work out. These professional footballers must be really gifted…

How did this filter to the media? Smoke and mirrors. Tarnished reputation. Sigh. Cough.

Wow…I thought the taxes on cigarettes in America are bad…you Brits take it to a whole new level!

Can we buy a DM with the fine amount raised

We’re probs gonna buy Loïc Perrin (Squilliachi’s successor) in January, if we are lucky. Otherwise we might have to welcome Källström back on Loan at deadline day.

*Drops mic and walks off stage*

The problem with Szczesny is his attitude, he thinks he’s way better than he actually is. He’s a good keeper but he’s way off the standards of the best, and with the attitude he has I cannot see him improving massively as he probable thinks he’s a great keeper already. We have a few players like him, who think they’re better than they actually are and are massively overpaid and it’s gone to their head. Giroud is another one, personally I would love us to bring in a world class keeper and forward and bring these two down to reality.… Read more »

Re: giroud, you’re beyond off base with that notion. he’s always welcomed competition for his place, and stated not once but many times he would like help in his area. he cocked up off field last season and greatly apologized for it. his “headbutt” this season was anger over feeling someone was trying to reinjure him, but again an immediate apology. he’s a teamer and a definitely has some confidence but haven’t seem him take it to a cockiness level like Wojtek.

He may not display the same obvious cockiness as Szczesny but the laziness and arrogance sometimes when he plays is clear. King Thierry was the same, but he was more than entitled to do this, Giroud is a million miles away from his ability. I’m not saying Giroud isn’t good because he is, he’s just not as good as he thinks he is. And yes last season he more than ‘cocked up’ sleeping with some tart the night before a huge game, real team player, sometimes apologies are not good enough. We have to make do with what we have… Read more »

Both petulant and daft. He really has got it all, no?

Part of the growing up pains I suppose.

This is one area we are well stocked in. Ospina did well in the world cup.

The last time Szcz spent time on the bench, it did improve his form and learning.

To be fair, smoking in the shower is unbelievably relaxing.

maybe no one, maybe someone from management came to the sowers and smell the smoke and scz admitted it was him.

Uhh…just how do we know it WAS a cigarette? Maybe it was some medicinal…

I’ve read the reports and it’s very hard to believe. But if it is true then what an absolute tit Szczesny is.

This is my feeling, too. That the rumour says he was caught in the shower suggests he was trying to hide it. If he’s trying to hide it, one would think he’d be doing it with no-one else in the shower, or indeed in the dressing room. When the hell would he have that chance? He went off the field with everyone else at the end of the game. Seriously, are we being asked to believe that he he pulled out a pack of fags in front of the whole team, went into the shower, and lit one? Really? Diaby’s… Read more »

Maybe he stayed lastin the showers on purpose to light up one when no one is there, and then someone forgot his slippers came back and caught Szcz puffing a cigg.

He needs to smoke something stronger and chill the fuck out!

He needs a rest, with a cigarette in hand obviously.

In the summer he claimed he doesn’t care about Ospina as he will be no.1 goalkeeper. He is looking like a real idiot now!

I’m amazed at the number of people on here who have never smoked a cigarette in the shower. Amazed.