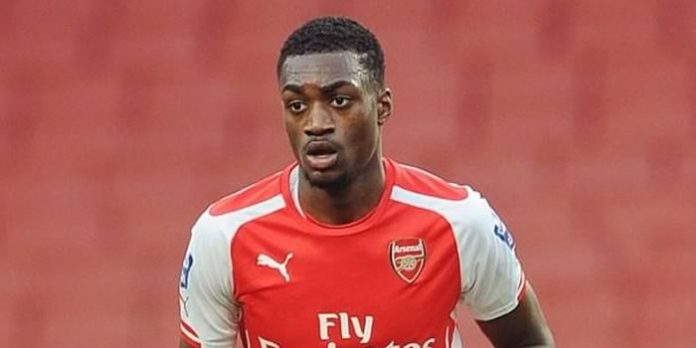 According to our well-informed youth correspondent Jeorge Bird, Semi Ajayi is on trial with Sunderland this week, and played for their Under 21s yesterday as they mull over a move.

Although he made the squad on a couple of occasions this season due to the injury crisis and lack of defenders, the 21 year old wasn’t handed a first team debut.

The move is curious as he only moved from Charlton to Arsenal in 2013, signing a two year deal which expires this summer.

He was also called up by Nigeria but declined the invitation to concentrate on his club career.

If he has impressed sufficiently to make the move to the north-east he’d join fellow ex-Gunners Vito Mannone and Seb Larsson at the Black Cats.

Although Larsson is a regular, the Italian keeper lost his place to Costel Pantilimon despite being voted Sunderland’s Player of the Season in his first campaign there.

Should Ajayi depart, the fact that Isaac Hayden has had ankle surgery, means that the two most likely ‘youth’ candidates to step up if required will be no longer available to him.

Does that suggest a transfer market move is imminent?

Strange one, clearly deemed not good enough but at 21 seems a bit premature to count our losses already. Anyway Good luck to the lad.

He may have decided not to sign a new contract as he thinks the grass is greener elsewhere, so rather than hold him for the sake of it, let him go now and try to get a few quid in and lose his salary.

There better be our else… er!

Agreed. Strange timing. Who starts in the center of defense in the FA Cup this weekend? Chambers and… Brighton seems like an ideal match for Mertescielny to kick up their heels.

No one likes losing a Semi, but our Coq’s in good form, so no worries.

Me So Hornsey
Reply to  BillyBatts

Hayden injured and Ajayi moving. Do we even have defenders in the youth team? This is scary!

Don’t worry, I heard we’ve got some mean looking U12s to replace them…

Well Bellerin and Chambers are both younger than Ajayi!

I hope Arsene wants to get Semi playing with our Coq.

Mertescienly have a couple of more years in them. To rotate them, I’d rather have the likes of Aymeric Laporte, Victor Van Dijk, Balanta, John Stones, Fabian Schar, Antonio Rudiger or even Varane! Young, talented, high potential and most importantly, much cheaper! Don’t forget we have Chambers as back-up too. If he plays top class when he gets chances, who knows, could replace one of the seniors? We didn’t buy him for 16 million for no reason…

Varane would be amazing. That sounds a bit Football Manager to me as a possibility, however.

Arsene knows best…….. Ajayi wishing you all the best in life……. You should have come for the AFCON you may have an eye catching moment and also have a gold medal. Well Goodluck

Nigeria didn’t get to ACN this time.

I was never impressed with him at U21s. Hayden is a better prospect. He’ll do well to get a shot at Sunderland.

transfer and imminent, all in the same sentence ?

Well from the comments at least he can be a good player… For puns!

For everyone who doubts the boss and the bubblegum Fan who started watching football yesterday – please watch https://www.youtube.com/watch?v=wgPGTWPiMzc

Nigeria didn’t qualify for the African Cup of Nations, so…

I wish someone had told me 😉

Fixed the story now, thanks

So one can autocorrect the column but not the comments. 🙂

I dont think he got called up for the ACN, it was just an olympic squad get together, Iwobi has been called up to it too. And Akpom has been asked to it too. As for him being a loss to AFC, well we’ve had a massive injury list at the back for most of the season and he was not deemed good enough to get a game, Stefan O’Connor made his debut aged only 17, so Ajayi at 21 clearly had no future with Arsenal. Any youth player who has not made their first team debut by age 21,… Read more »

Can we please just keep him for the poorly executed puns.

Sad to see Semi go, but at least we have our Coq.

Truly hope our Coq is the next big thing. However i am concerned that one bad game and people will want to bash him.

I don’t want anyone bashing our coq!

Nigeria is not participating in the ongoing African Nations Cup. He was invited for international friendlies.

The new polish kid is viewed to be a CB. This could why he is being thrown into the first time.

This creates the urgency to buy a defender.. Wish Semi well though.. He sounds like a focused guy.

Best wishes to Semi. I thought he might make it, given the shorter path to the first team for our academy defenders.

Anyone know where the Paulista rumours sit on the poo meter?

By the way his name is pronounced “shemi”

Everybody likes a good Shemi.