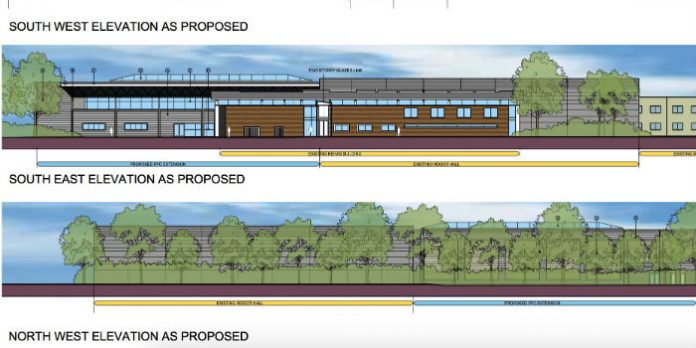 According to The Herts Advertiser, Arsenal have sealed approval from Hertsmere borough council planning committee meaning a long planned expansion of their London Colney training facilities will soon become a reality.

The Gunners board have already ring-fenced cash for the project which will see the construction of a two storey extension to the indoor training pitch which will accommodate a new strength and conditioning gym replete with pre-activation and stretching area, eight platform stations and movement areas, cardio vascular equipment space, spinning and weights area, 3D performance analysis area, running track with integrated performance analytical sensors and associated storage.

A host of new offices, changing rooms, an upgraded laundry and other backroom facilities are included in the plan.

Arsenal outlines the following reasons for their proposal:

“When the training centre was first opened in 1999 the centre was considered one of the best in Europe. Today whilst additional improvements have been made to the medical rehabilitation areas improving the response of players to long term injury, other areas have fallen behind in football development terms. In particular facilities for strength and conditioning and analytical research have fallen behind top European and Premier League Clubs.

“The facilities and equipment planned for this new building are now considered essential by all the top clubs to assist in preparing and developing footballing talent. They are now deemed essential facilities by footballs governing body and medical professionals and all of the facilities proposed have been incorporated at St George’s Park, the national Football Centre and at Loughborough University where national sporting bodies have training bases using these facilities.”

It’s the latest in a series of improvements made across the first team training centre and the Hale End academy.

Things haven’t gone our way football wise and ‘the analyst’ will have you believe that this isn’t the Arsenal of old. Which I agree with. This Arsenal keeps growing bigger and stronger each day if you bother taking off the blinders. Arsenal4life.

Nice to see us doing more about the injury issues, after recruiting a new team we’re now giving them a new building. Here’s hoping it works.

Are they offering public gym memberships there? If it’s at Colney I might actually go.

…Who am I kidding.

Good, City have a shiny new training ground complex, we’re keeping up with them at least.

this is the best article about planning gain in the home counties that I’ve read all day!

now, if you could please come up with an article about Middlesex Council turning down an application to build a new shiny shithole on the site of an old, shitty shithole, and for good measure implementing a compulsory destruction order on the old shitty shithole, then that would make today the perfect day for all planning news needs

David C
Reply to  the only sam is nelson

are you talking about Tottenham’s ground? Sorry, I live in Canada and assumed it must be Spuds area.

Does this mean that Shad Forsythe will leave? How is his work perceived after close to a full season with Arsenal?

It’s the business end of the season post World Cup.

Usually we’re despondent because our best players are all having touch-and-go fitness tests before our last-16 UCL tie. Not this year.

I don’t quite see the problem.

Well you see, while Shad was taken on, there’s still another man running the show in terms of fitness, the same guy as before. What Arsenal should have done was taken on Forsythe and gotten rid of the other man, but they didn’t. However, since Shad has started working with the club, long term injuries have been shortened dramatically. Giroud returned 3 weeks before he was supposed to, and Wilshere was back in training two weeks before he was due back, or instance.

Untrue, the other bloke is still there but he’s most definitely not in charge.

All right, so better recovery time and less injuries thanks to Forsythe. So I suppose the job post as strength and conditioning coach is not to replace him but to support/help him?
Btw, I think it would have been crazy to fire him after such a short spell. For that kind of stuff you need time to see results.

Forsythe is a medical man responsible for injury recovery mainly. He might advise on training techniques but he certainly won’t be the man in the gym doing squats with the players – that’s what the job being advertised is for.

Thanks for the clarification on Forsythe’s role. Arseblog is my quasi exclusive source of Arsenal news, and the only thing I knew from a previous article was that “This week, American Shad Forsythe joined Arsenal as a fitness and conditioning coach”, which to me sounded similar to the job advertised (“Strength and Conditioning Coach”).

Arsenal should be expanding overseas. Chiefly America. They should be building the brand out there particularly with recent South American acquisitions. The US (where the sport is growing) is ripe for a couple of Arsenal Academies (Bi-coastal). It will not only be a brand maker but will feed on the growing talent pool both in the US and Central America (Zelalem , Campbell) plus afford emerging players in Central, South America, Caribeans and opportunity to train in top end facilities with their North American counter parts. Asia is a big market and should not be ignored but I would frankly… Read more »

Still feel jealous of City’s opulent and extravagant tax write off but this will have to do.

someone mentioned city having a new training facility and says we’re keeping up wiv them….. seems more like we’re setting d pace for at no time were they beta dan us emirates wise

Had to thumb you down for the – ‘wiv’, ‘d’, ‘beta’ and ‘dan’.
Please read the comments policy – text speak is not permitted.

While you raise a good point, that was painful to read.

Hope the swastika patterns are for good luck.

Not sure what you mean by this comment. It sounds like the sort of thing that I would expect that cunt John Terry to say.

You would expect John Terry to hope that swastika displays are used for good luck? You obviously know a different John Terry than me.

In fairness the tree designs do look like swastikas

Can someone please confirm to me that the new Medical Rehabilitation area’s will in fact be know as the Abou Diary Wing?

not just the Abou Diaby Wing but the Diaby residence, and that facilities have been provided for the accommodation of his family?

they should remember to use skylights to flood darker corners with natural light. and pick a neutral colour scheme accentuated with bright furnishings.

How long will this take?

it should be ready by thursday lunch time.

Good, cause it must be done before tea time.

2-3 weeks is the standard arsenal line.
Followed by a 1-year delay.