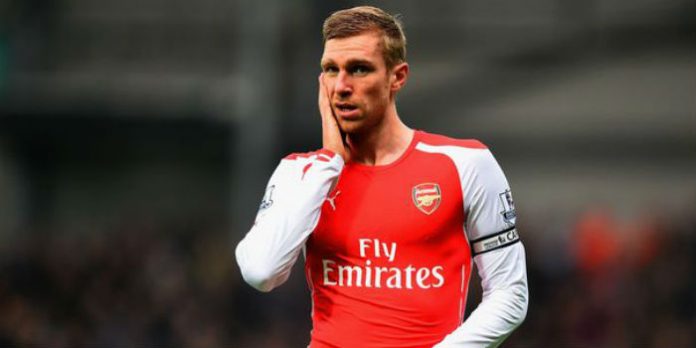 Per Mertesacker has underlined the importance of making a good start at White Hart Lane claiming a focused defensive performance will help silence Sp*rs players and fans.

Recalling the brilliant start made by the Gunners last year, when Tomas Rosicky opened the scoring inside two minutes, the German went on to note that four clean sheets in the last five games make for a confident camp ahead of one of the game’s of the season.

Speaking to Arsenal Player the BFG said: “We know from recent years that defensive unity is vital especially against our north London rivals, so we have to be really cautious on the defensive front.

“We need to be really focused, especially in the first 15 minutes, to keep the players and the crowd quiet, then afterwards let’s play our game and try to do it again.

“We did very well last season, as we scored very early and then defended well until the end, so it’s going to be the target for this year. We have good confidence at the moment so let’s show that again.”

“It comes very quickly into your mind that it’s a special game for everyone at this club, so you better get on with it quickly otherwise it will hurt you. We did well especially last season – we won all our games – so let’s focus on not giving them any chance.”

Elsewhere Theo Walcott says the north London derby is the game he most looks forward to each season…which might be a little surprising given his last ended in an injury that ruled him out for a whole year.

Speaking to the Evening Standard, the England international said: “It is enjoyable — it’s a bit different and it is always a great atmosphere at White Hart Lane. It is probably the fixture I always look forward to playing in the most, to be fair. It is one of the biggest games for both sets of fans and this year it is going to be tight.

“Tottenham are doing very well, getting those last-minute goals which shows a knack of getting important three points. It will be two very strong teams that are very high on confidence so for the neutral it will be a very interesting game.

“It is going to be difficult to call but if we play the way we did against Villa, hopefully, it will be ours. A draw wouldn’t be a terrible result but we always play to win.”

Arseblog News chose to redact Theo’s comments about ‘banter’ with the Sp*rs fans.

2 consecutive wins at WHL would be boss. But the team is in good form, so COYG!

Don’t like this ‘draw would be ok’ bollox….smash ’em!!

We should be up for this one.

They are the great pretenders.

Remember once the press lauding over them and telling all that no Arsenal player can get into their first 11. What poppycock that has been (as predictable drivel from the media)

We should not take it lightly. We need to reinforce our superiority. If we play at our best, we are better in ALL departments. BUT we will have to play to strengths.

This win and us kicking manure out of the FA cup will be the highlights of the season. COYG!

Kiss dem teeth ya get me rude boi, i see you fam ^^ or whatever

1-1 at Newcastle. Hehe!
I loved that negative spiral that we were in.

That was poor attempt but blessings !!!

Giroud Will Score His First Hat-trick For Arsenal This Saturday…COYG..!!!

Early goal for us, loads of possession for them with little penetration and then some clinical finishing again from us on the counter. Eriksen grabs a late consolation .final score 4-1 win for us .COYG

I wouldn’t be too upset if both sides grabbed another goal each.

A NLD is always unpredictable. Line up has to be Ospina, Nacho, Mertescielny, Bellerin, Le Coq, Rambo, Santi, Ozil, Theo and Giroud in a 4-1-4-1. Play like we did at City at first and use Theo’s pace to counter attack, grow into the game and beat them playing the beautiful game. If we play like we did at Villa then we’ll win. Unfortunately away at Spurs is a completely different game to a home tie against a truly atrocious Villa side. Nerves are really starting to kick in though and have been building up all week. Up the Gunners!

And boys and don’t forget to take those adorable selfies coz 1…it makes Carrager ‘disgusted’ which is also quite
nice thing to do!…And 2…it is a tradition – u beat the spurs on their ground and take a selfie like a boss!

Just stick the Coq down their throat. Should shut them up for good.

Not sure they will offer what City offered. If we could make City look pedestrian, then that level of application should silence them.

A draw is as bad as loss given the current table tbh! we cant let man united, southampton get away from us!!
COYG 🙂

Mert sure loves to run his mouth off to the media. Just do your job and win the game, then you can talk as much as you like after.

No idea why this got voted down so much I totally agree. I don’t like all this constant talking before games that mertesecker and a few others are doing, let this business be done on the pitch and just win the game.

It got voted down because it’s insulting to Mertesacker, and virtually nobody here agrees with what it says.

You got voted down for cheering the idiot on.

No idea why this got voted down so much I totally agree. I don’t like all this constant talking before games that mertesecker and a few others are doing, let the business be done on the pitch and just win the game.

A win, please… and Ospina to maintain his clean record.

The key to this game depends on what happens Friday night if everyone especially Giroud made it to bed early enough.

Arsenal is going to beat Tottenham 3goals to nil.

when i was little I asked my father,
“what should i be?”
here what he said to me –
“dont be a cock my son!
support the Gun, support the Gun”

To be honest, its not that hard to silence SHL.