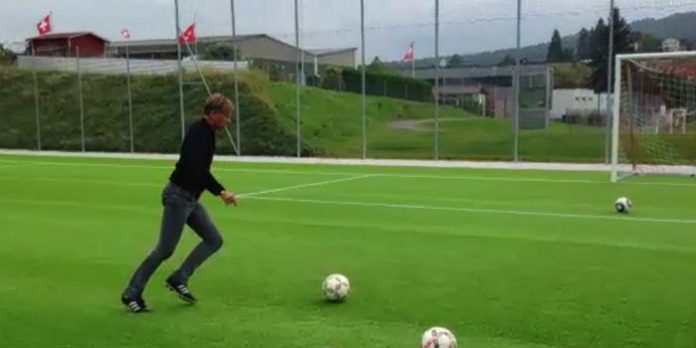 Arsenal have ordered two pitches (1,400 square metres) of new artificial grass from the Tisca Tiara textile company in Switzerland as they look to upgrade their all-weather facilities at London Colney.

A delegation from the Gunners, led by Academy head Andries Jonker, visited the company in autumn last year, and put the state-of-the-art turf through rigorous testing before placing an order.

“We travelled around Switzerland with them for two days,” revealed Sports Section Director Andreas Tischhauser.

“Andries Jonker was there and carried out thorough tests, looking at ball behaviour and how the grass affected the skin etc. He was excited.

“Then we went to an artificial pitch where a group of youngsters wanted to play. As they didn’t all have football boots, two or three of them played barefoot. That really impressed Jonker. He said, ‘if people can play barefoot it must be very skin friendly.’ ”

According to Swissinfo.ch, Tisca Tiara created the new, tough grass to exhibit the same ball behaviour as natural grass but also reducing the risk of injury and burns. Moreover, each individual blade’s construction means conventional support with sand or granules is not necessary.

Apparently Arsenal paid 150,000 Swiss Francs for the turf, although whether that was before or after the currency’s recent roller coaster journey we’re not sure. At today’s price that’s around £100,000.

The turf is due to be used at the FIFA Women’s World Cup in Canada later this year. “It’s certainly trendy,” continued Tischhauser.

“But it’s not our aim to replace traditional grass. We think natural grass belongs inside stadiums, but every club needs artificial turf to train on and also for the juniors. It’s all part of having a modern infrastructure.”

Arseblog News does wonder whether this latest development is part of our ongoing investigation into the number of injuries suffered by our players. Back in October it was revealed by facilities manager Sean O’Connor that London Colney had ten Desso artificial pitches; 95-98% real grass, with an added 2-3% of synthetic fibres mixed in.

Update: We’ve been asked to clarify that these pitches are being considered for the Hale End academy complex, and as yet no purchase has been made.

I think we need a pitch made of shit to match the few we can still find in the PL.

Was Shad there as well?

In my country we play on dirt ground. 😀

I wonder if pitches that are kind on muscles will make them more sensitive. This is just an observation, but I think players from South America and Africa suffer fewer injuries and have stronger muscle fibres. Of course there are other factors as well.

Our of interest, how have you observed South American and African players have stronger muscle fibres?

Haha. Watching the world cup you can see the energy that South American and African teams carry that European teams don’t. OK this is also down to tactics and stuff.
I’m just echoing what Wenger said when he talked about what makes Alexis so energetic. I think he mentioned the playing environment also influences how they develop.

What’s your medical opinion on the ever-fit Aguero?

I’m increasingly convinced that Jonker will succeed Wenger. Almost every new development and innovation at the club is attributed to him. Youth development, scouting, signings, style of play… now he’s choosing or pitches! The only thing he isn’t doing is managing the first 11! Am I the only 1 that sees th?is

Played on the pitch for Arsenal manchester sc at last years charitu tournament. We Got to the semi finals, I clear one off the line. Good pitches similar bounce to 4 g pitches. Superb quality. Made me wonder do we get so many injuries becausr are players are do used to playing on such good pitches that when they go away to other clubs with shitter pitches our players legs, muscles are not used to bobbles , grooves, holes on lesser pitches our players bodies do not react well , as they’re conditioned out of reactibg to rough pitches and… Read more »

To be clear. Our training pitches are so luxury the team get injured on shit away pitches more easier as they not used to shit surfaces.

I wish I had the youthful vim to get angry enough about the composition of training pitches to spend Monday trolling fellow gooners about the correct mix of synthetic to natural grass and how that correlates to a more rapid recorvery time where twisting injuries are concerned.

So instead, I’ll just put this out there: John Terry is a cunt.

So that’s what there smoking over in the Emiratis

Thorough tests yet they had to use a bunch of youngsters with no boots. Very thorough…

I say fuck it, make them train at the local park where they have to do mazey dribbles around smashed bottles and slide tackle through syringes. That will prepare them for the next Stoke away game

Ps Terry is a cuntface

Headline still claims there was a purchase made for London Colney…