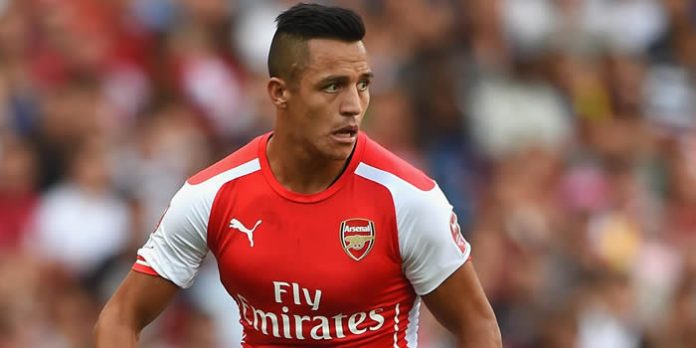 Arsene Wenger says that Alexis Sanchez has the football enthusiasm and quality of legendary striker Ian Wright, but thankfully doesn’t share all the attributes of the former leading goalscorer.

Wrighty was a bit more boisterous and likely to pick up a yellow or red card as he blasted his way through opposition defences, but in terms of his overall outlook and how much he loves the game, the Arsenal manager believes the two are very similar.

“He is a bit like Ian Wright,” said the Frenchman. “His enthusiasm, the enthusias1m of Ian Wright. He has that. He is very friendly and bubbly every day. He is quieter than Ian Wright but that is not difficult and he doesn’t get booked!”

Having missed the derby on Saturday, as well as the 5-0 demolition of Villa, the Chilean has had some time off to recover from a mild hamstring problem which the club have been cautious over, unwilling to risk aggravating it further.

Wenger continued, “For us it is important that he has no setback as once you go into February, if you have a muscular injury and a guy has a setback, you say bye, bye as the season is over as it is six weeks out.

“By the time you come back to your full level it is April and that is why we didn’t take the gamble. He has had a bit of a winter break now that he didn’t really want, but he got one and I think he will now be recovered and fit until the end of the season.”

The team’s leading scorer could come straight back into the starting line-up this evening, but with Danny Welbeck now fit and Theo Walcott continuing his recovery Wenger does have options.

Sadly, one of those options does not include Alex Oxlade-Chamberlain who will miss a further two weeks with a groin problem.

Alexis us the man to lead us to not only a top four finish but also to go a long way in the Champions League and FA cup.
We sorely missed both him and the Ox on Saturday and his return will give the team and us supporters a massive lift.

I think we have a great chance of winning the cl this season….especially if arteta and debuchy are back for the quarter finals and nobody else gets injured

When everyone is fit, this team is stronger than many are willing to acknowledge. Winning the CL is a distinct possibility.

Ozil with a lovely flick
Reply to  Man Manny

It’s kinda not, it’s a “distant” possibility but that is certainly a liberating fact for the squad so they can play their best without pressure! One can hope though… I certainly do!

Let him come in and help turn the season around. We still have enough games to do that

Sad about the Ox………one of the most improved players this season.Defends well,is excellent in counter attacks,but at times his decision making lets him down.He’ll get better though and i’m sure he’ll become of the best players in the world.

I do wonder if these longer than expected muscle injury lay-offs are precautionary or if there’s a lack of desire to get back quickly from the players. It’s one department the spuds have undoubtedly been better than us this season, their fitness and lack of injuries.

I think Arsene has adopted a precautionary approach towards injuries this season……….especially because of Rambo’s setbacks last season

Lets blow Leicester away and get another run started!

Not sure that Alexis has one, so we could use the one above for him.

I’m looking forward to seeing the frontline of Alexis, Welbeck and Walcott tonight. If I’m not mistaken, we’re yet to see it. That pace!!

I would love to see Gabriel in action soon

I think he will start tonight.

Full stops are important but you capitalised the W, which would look wrong in the sentence above. Just so you know.

Alternatively try to write something about Arsenal and its players, given it is an Arsenal site and everyone understands the comment True Red made.

Whoops, on the lookout for pendantry as there is some on other threads.

Apologies, will try to upgrade my pedantry detector.

Also, if you’re a pedant you don’t need a pedantry detector, you need a minor grammatical error detector.

Oh Leicester City, how unfortunate can you be? I hope our stewards will be on hand to “rescue” Sanchez from one of Nigel Pearson’s trade mark choke holds as I see him running riot this evening.

Here’s hoping he gets a similar standing in Gooner folklore to Wrighty too!

“The fear of Alexis is the beginning of wisdom”

I think Wenger just trolled Wrighty in a gentlemanly way

I think Wenger does everything in a gentlemanly way

My only opposition to what Wenger will likely do today is start Rambo over Rosicky. Bellerin showed better form than Chambers. Replaced. Monreal showed better form than Gibbs. Replaced. Same goes for ospina. Why is it that Rambo (don’t get me wrong, I love the guy) would get special treatment. He’s been our weakest link in spite of running his socks off.
If Ramsey starts I hope he smashes two goals in, because if he doesn’t… Jack and Rozza are chomping at the bit to take his place. Black lungs and old age included.

Disagree about Ospina, the first time he actually had to do anything in a game (Tottenham) he was found wanting. I strongly feel that on his day Szczesny is the better keeper.

I’m not sure you can blame Ospina for the goals against Spurs. Ramsey didn’t track Kane for the first and the defence was lacking for the second. His positioning was fine for both and it wasn’t down to handling errors.

Alexis! The Beast Of London (TBOL).

I think santi and per shuld be rested 2day.

If we had a fully fit squad, the possibilities are endless. It’s actually scary to think how good Alexis could be, this is his first season and he’s running riot. Next season, who knows what could happen… COYG!