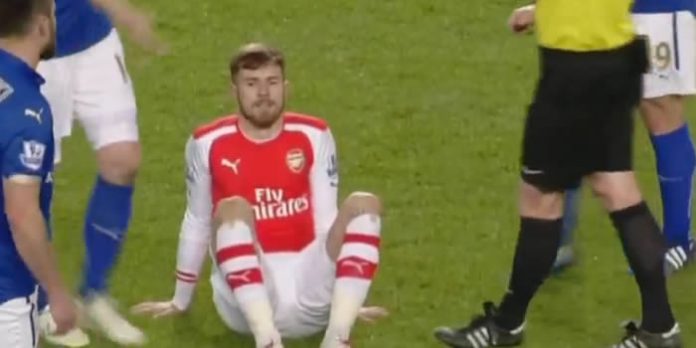 Arsene Wenger says he’s worried by the fact Aaron Ramsey seems to have suffered a recurrence of his hamstring injury for the third time this season, but has denied suggestions he’s overplayed the midfielder.

The Welshman was called into action this evening in the 72nd minute as the Gunners tried to get a hold on a game which was tilting Leicester’s way in terms of momentum, but had to leave the field less than 10 minutes later.

Speaking after the game, Wenger admitted he had been torn between using Ramsey or Flamini and plumped for the former because he’d offer the team more going forward.

“It was not the best of decisions,” he said ruefully afterwards. “I don’t know how bad it is yet. Just visually, it didn’t look good.

“When a guy stops straight away and sits down, that’s not good news. There’s a recurrence now of a few muscular injuries and it’s difficult – we haven’t found out why.

“I basically left him out today because I wanted to be cautious with him. I had to bring him on – I had a hesitation between Flamini and him – because we lacked a a bit of offensive power.

“He’s not overplayed. Before I never looked at him, I just played him in every game but since he’s had these problems I’m a bit more cautious with him.”

With Alexis Sanchez going off too, it will add to the injury worries ahead of the FA Cup game on Sunday and with the Champions League looming.

“Sanchez got a knock on his knee,” said Wenger. “I don’t think he was himself. From the moment he got this knock, he was never really comfortable. I was ready to take him off at half-time but he said, ‘no it’s okay, I can go on’.

Fingers crossed on both counts.

All too familiar. fucking sucks.

That was some rubbish comment, a load of baloney and absolutely baseless! How can it amount to mismanagement if a guy was fit prior to the commencement of the match and as a result of a knock by the opposition player during the match his mobility was restricted? If he thinks and convinces his manager during and after the 15 minutes break that he was fit to carry on with the second half, then the manager had to give him the chance and monitor him, which he did. Alexis Sanchez is a different bid of player who wants to be… Read more »

Ramsey looks bad, but hopefully Sanchez just suffered a knock. Nervy win, but great to get 3 points. Liverpool beating the Spuds helped us as well.

That makes it look like a red card challenge, both feet off the floor and no control. Looked bad in real time too, although the massive fartguzzling thundercunt “summariser” on my stream didn’t agree. “Physical”, “passionate”, “determined” etc were the kind of nauseating cliches he spouted, instead of just a shit tackle from a player whose own injury issues mean he should know better.

Fuckin hell I didn’t think it was that bad cos I was streamin it and the quality was shit. He didn’t even get a yellow for that, did he? straight fuckin red that. Upson always injured in his career should make him careful not to injure another player cos hes fully well aware of how it feels but still the cunt went in so heavily on sanchez. Absolute fuckin disgrace that

I meant to upvote, silly mobile!

A one two with Ozil there and he was through! Only problem was that it had to be in slow motion to see it such was the speed of our brilliant playmaking maestros.

Ozil’s pass pre-Alexis crunch is an act of true grace and beauty.

And not even deemed a free kick, what a fucking joke Jones is! We’ve seen some pretty AWEFUL refereeing this season, but for me yesterday was the most consistently terrible I’ve seen in a long long time.

Thought we had paid our dues in the first half of the season. Can’t we just have a breather with injuries? Hope we don’t have to rush Wilshere and Gnabry. Get well soon Ramsey…Hope Alexis is not too bad.

Poor Ramsey hamstrings are the worst injury in terms of you don’t know til you get out there then it goes again
Alexis looks a knock but then giroud got hit by a ball and broke his leg so who fuckin knows. Curse you injury gods, take terry and leave us alone

Unfortunately, these types of injuries can become career threatening. Too much scar tissue builds up in the muscle and constantly becomes re-aggravated.

This is why we are now punished with Michael Owen as a pundit.

What I would like to know is if the thigh (Wengerism for hamstring?) problem he was out so long for and this hamstring are on ‘that’ leg. If the other leg, is it bio-mechanically related?

Is it not the job of the *manager* to decide when to substitute a player? What’s with all this “he didn’t want to come off” or “he wanted to play” horseshit?! A blind muppet could see he wasn’t doing the team any good from the moment he got the knock, so why didn’t Wenger take him off as a precaution and put a hungry and eager-to-prove-himself Welbeck on instead? Why not sub him for Giroud? When the HFB did come on it became glaringly obvious how much we had been missing his hold-up play. I’m so angry about the entire… Read more »

why not
Reply to  wash_dc_gunner

We won. 3 points. Above spurs after saturdays callamity. I hate my life..

Knee on knee for Alexis. Usually with those injuries one player walks away unhurt. Fingers crossed for him.

I might do what Peter did in family guy and find out what is his beef with us.

Atleast we have Jack coming back. Love what ozil has been doing since he came back too. By my count that’s 3 goals 3 assists in 4 starts? That there is the true ozil.

I like this new bulked up version of Ozil. Looks more suited to the physicality of the Premier League.

Are you kidding me? Ozil put in a shift for 10 minutes then did nothing for 80+.

why not
Reply to  Builderarch

Disgusting! absolutely disgusting 2 assists. I hate him and his mother.

@builderarch, surely you meant to write “Walcott” and not “Özil”. Otherwise I must say your statement is complete and utter horseshit.

Ramsey is surely done as a first team player this season, he needs a long break and proper rehab to get over these issues. Hopefully Chamberlin will be back soon as will Wilshere. Luckily this hits us in the part of the squad that we have the most depth and flexibility with Chamberlin (when fit), Ozil, Rosicky, Wilshere (when fit) and even Flamini that can fill in for Ramsey. I can’t believe Wenger let Sanchez talk him into going back out there to start the 2nd half when we are up 2-0 and had Giroud, Welbeck and Ramsey on the… Read more »

I agree. I love alexis and commend his courage but the tail doesn’t wag the dog. Wenger should pull rank in these situations

You try telling Alexis he isn’t going back out in the 2nd half. He probably just laughed at Le Prof and said “Stop me..”

But isn’t that the problem… ?

why not
Reply to  Xxxrob

Finsbury Park Gooner
Reply to  why not

OBVIOUSLY it’s an exaggeration, but the general idea is right.. Wenger allocates too much autonomy to the players at times.

i like ramsey, but he doesn’t seem to be adjusting as quickly as he should to this new formation and his responsibilities. injuries haven’t helped, but i remember that game he didn’t celebrate a goal – like he didn’t want the spotlight on someone else. shame really. if he went back to basics like he did at the end of the 12/13 season he’d still be putting in motm performances even without the goals. hopefully he comes back in 15/16, but i think this season has passed him by. ros should be able to fill in and ox and wilshere… Read more »

The same nonsense was spewed at Santi when he first returned from injury.

Give Ramsey a bit of time to find consistency.

Meanwhile, Ozil has come back to good form courtesy of the gym.

I have given up all my hope of having a fully fit team. Wenger as well.

God damn.. I thought Arsenal won today.. I’d be scared to click on this article, it the match was a draw or….

In regards to Ramsey, I think we’re focusing on the wrong statement of Wenger. This is the biggest issue imo “He’s not overplayed. Before I never looked at him, I just played him in every game but since he’s had these problems I’m a bit more cautious with him.” “I just played him in every game…..” till he got injured. Have we not seen this reactive attitude to injury fro, Wenger one too many times? Whereby he’ll consistently play a player until they get injured, rather than proactively trying to manage the volume of pitch time of players before they… Read more »