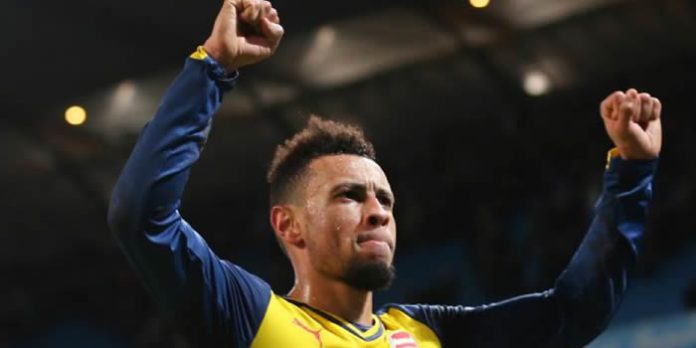 Francis Coquelin has signed a new deal at Arsenal which will keep him at the club until 2019.

The combative French midfielder has made himself an indispensable part of Arsene Wenger’s team since his somewhat fortuitous recall from Charlton just before Christmas, and at his press conference today Wenger confirmed that the player had extended his contract.

A series of storming displays as the defensive midfield lynchpin convinced the Arsenal manager to offer him new terms.

It’s quite the turnaround for a player who looked to be surplus to requirements not so long ago, but who has now jumped above the more established Mathieu Flamini in the pecking order with skipper Mikel Arteta still sidelined with calf and ankle problems.

Anyway, it’s good news that we’ve kept hold of our Coq when others wanted to pull it off us. The filthy beggars.

remember the invincibles
Reply to  Gooneropolis

Unyoke The Ox
Reply to  remember the invincibles

I’m really pleased that he’s signed the extension, but I definitely do not want coq getting into me.

If someone comes for our Coq, they shall pay a huge ransom due to the extension. But nah, still gonna hold on tight.

Gunner From Another Mother
Reply to  Gooneropolis

I must confess this is quite a relief. There was a part of me that thought his head may be turned by a big offer elsewhere. Glad to see him stay, as he really seems up for the cause!

Did you just say…”insert Coq”?

Glad for the Coq. Not that glad for the Coq jokes. When exactly are they going to get old? I say this knowing full well I still come across one and have a silly giggle because Coq is like cock, you see. Might I suggest, Blogs, a Coq joke comment limit system? Where for example we limit the week’s puns to ten and after the tenth person to gush out with a Coq pun, the jokes get blocked for the rest of the week. Coq blocked if you will. Perhaps the visitor with the best pun might have a symbol… Read more »

How I wish my Coq was also that easy to extend

Great news. Lets hope he stays fit till the end of the season. We’ll need him!

Of course! We will need our coq to remain fit and hard for us to continue performing well.

This is great news. Great to see we’re being more proactive now re signings and contract renewals!!

very happy about this. Le coq has become my favourite player. An example of hard work,tenacity and patience paying off in a sport where media/agent drummed up fame and reputation comes before actual raw talent. big up le coq.

Coq jokes aside, delighted to hear this. Coquelin is in terrific form and we needed him to stay. And, it is fantastic to hear, we are not losing players anymore, that we want to keep at the club. Things are changing at the club and for the better. One star a season, extending contracts of our established key players, contracts to promising youngsters ike Akpom and Bielik.

Arsene, certainly is gonna hand over a far better team to his successor when compared to fergie whose squad needed 150m investment and still looks incomplete.

Please never give up on anything. Anytime you feel like throwing in the towel, just remember The Coquelin Arsenal Story…and you will be inspired.
What are we saying? A man who was down and waiting for the word ‘Out’ about 7 weeks ago is now signing a new contract and that as an integral part of the first team. Wow! What a story. I am inspired. I will never give up…

No issues with paying for coq.

Really glad about that, as long as his performances don’t drop off (I don’t think they will) then he’s POTENTIALLY the best in the league there, Matic is stronger but the Coq may well be quicker.

Reading thru the post, i was like ‘no coq jokes??’..till i got to the end..well played blog..well played!

Well you must know that blogs works on his timing… and who wants a coq that goes off too quickly?

Great news, really happy for him and hope he’ll keep improving to help us win trophies.

Credits to Arsène too who gave the lad a chance by bringing him back and starting him.

Coq isn’t quite interesting enough for this midfielder who buzzes around every second of every game. for this my mate call him -COMBINE.

Coq isn’t quite interesting enough a name for this midfielder who buzzes around every second of every game. for this my mate calls him -COMBINE.

Coq isn’t quite interesting enough a name for this midfielder who buzzes around every second of every game. for this my mate calls him -COQAINE.
Sorry for the typos, someone take the first two posts off please.

Coq’s story highlights the value of determination and dedication. Frimpong’s story, on the other hand, highlights a complete lack of both. Frimpong was supposed to be the successor to Alex Song but his bad attitude and lack of application saw him leave the club.
With the youngsters, the club will always wonder if they are actually buffing a rough diamond or simply polishing a turd.

Frimpong sounds like a perfect successor to Song so.

Polish a turd shiny enough and maybe even Barcelona will buy it off you.

I had high hopes for Frimpong but I think he started believing his own press a little once he got near the first team, much like TGSTEL.

In fairness to them, I think as outsiders to the game we might all underestimate just how much talent and character it takes just to be the worst player out of 22 on a premier league pitch, let alone to truly make it as a top player.

The Coq squeezed in the Back door but is now very much to the fore!

HURRAH FOR THE CONTINUED PUNS IN THE COMMENTS!

The coq has exploded.

Its refreshing how our important players are committing themselves with new contacts, years back they would have left. coyg

Finally an extension that keeps its promises 🙂

Good to hear!
Refreshingly sharp, tenacious and hard working. Don’t think a big money DM could do much better than Coq so far.
Hope he keeps Eriksen in his back pocket tomorrow!

Hopefully he keeps his motivation levels up. I find it a bit suspicious that he started playing so well just before his contract expires.

This is good! I am loving the coq! The more coq the better i cant get enough coq. Our coqs gunner smash their cock to bits.

credits to wenger tho for having the balls to get us the Coq. our solution from within. le prof still has an eye for huge talents apparently

We have finally found Gilberto’s replacement – all hail D COQ