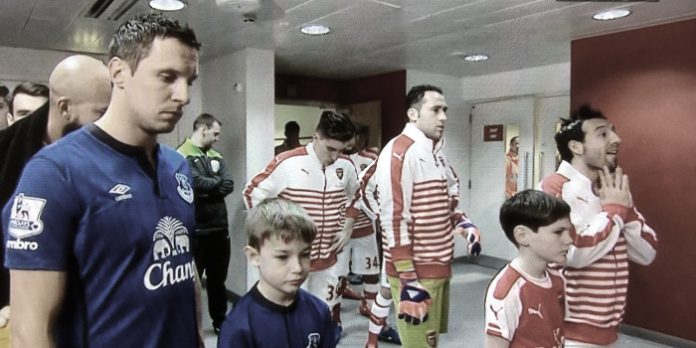 All of which indicate that Arsenal played deep, invited Everton to attack, and hit Everton on the counter.

Typically, when we see a defense-first approach, the defensive team does all the things in the first chunk and the result is that the things in the second chunk are flipped. In other words, if you invite the opposition to attack, they will normally oblige and get more passes in your final third and thus take more shots. And we normally see the counter-attacking team have a lower pass completion percentage because they are trying a lot of long outlet passes.

I suspect what happened was that both teams came out to play a similar style: press early then sit back. As a result, whenever Arsenal got the ball, after the initial pressure, they sat back and let Arsenal work the ball around. More evidence for this theory is in the fact that both teams attempted nearly the same number of tackles in the opposition half (Arsenal 11-12 Everton) and that the territory stat was almost dead even at 50.5%-49.5%. Also, both teams had almost the same number of corners 8-9 and crosses 26-24.

Interesting match from a tactical standpoint and I await the analysis of better tactical minds than mine to unpack the data.

Did you know that Arsenal lea the League in goals from set plays?

Ok, granted, 6 of those are penalties but Arsenal are also third in the League with 6 goals from corners. Chelsea and WBA have 8, Palace have 7, and Arsenal and West Ham have 6. In conclusion, Arsenal now play defense-first football and score off corners, just like West Ham.

The big difference being that Arsenal are 4th in the League in total passes per game and West Ham are 19th and Arsenal are dead last in long balls per game.

Who is the man?

Who…
led Arsenal with 7/8 dribbles
…Ox

Ox gathered the MOTM gong from WhoScored.com and to be fair to him, he did have a decent all around performance. He had 3 key passes, 2 tackles, 2 interceptions, and he was only dispossessed the 1 time. Meanwhile, Özil didn’t have any defensive stats and was dispossessed 4 times (led both teams).

Also, Özil was 5/6 crossing and Ox was 2/7, Ox was 80% passing, Özil 92%, and all of Özil’s crosses came from corners, though 5/6 is still impressive considering that Arsenal normally complete just 35% of their corners.

All of that is to say, I’m giving Man of the Match to Santi Cazorla.

1. He was captain.
2. He was second on the team in passes 39/44.
3. He was third on the team in final third passes 17/20.
4. He only created 1 shot for his teammates.
5. He took 3 shots for himself and forced a great save from Howard on one.
6. He was only 2/3 on dribbles, though one was a rainbow dribble deep in his own half to break pressure and start the Rosicky counter attack.
7. He had 6 ball recoveries, just like Coquelin (3rd best on the team)
8. He led the team with 5/8 tackles, just like Coquelin.
9. He had 2 interceptions, both in the Arsenal box.

Basically? He played along side Coquelin in a more conservative role and did a fantastic job! If Arsenal’s game plan was to sit back and counter it was Cazorla who provided a second pivot to Coquelin while also springing the Arsenal attack but staying conservative while doing that. It was the kind of quiet performance that doesn’t gather lots of kudos but was crucial to the final result.

Rosicky, scored a goal and made an awesome tackle after Cazorla dribbled straight into the Everton defense.

Gabriel, 10 clearances (2nd on the team), 6 interception (led all players), and a last ditch tackle to save a goal. Also made 87% of his passes but they were all very simple. Had one bad moment where he didn’t attack the ball properly and required a big save from Ospina. We need to see his passing range (and more matches in general) before we can comment on whether he should start regularly but overall it was a good debut from the January buy.

Ospina also had a good match, two good saves, and that tackle mentioned above. He also had a punch which kept Lukaku from getting a head on the ball.

All good, Arsenal in 3rd place!

Leicester 1-3 Arsenal: By the numbers

As far as smashed noses, the Coq lead both teams with two. He also lost the most blood.

Top 4 is getting a bit hot now,not sure if we should be looking behind us or looking up to catch man city.
Think 2nd could be a real possibility.
Throw in another fa cup,3-0 at Monaco in a few weeks and let’s go for it next year

The race for second is still wide open

In what way is second different to third? I mean, seriously, it will only look good when someone looks at the table in a few years. It’s not like we were competing for the title and we ended second. No need for that extra pressure on the team. Just look to qualify for the CL.

I for one believe that we should finish as high as possible by winning each game we play. I’m not suggesting we look forward to where we finish, but if we win each game, you never know. City is only 4 points ahead of us. So you mean if City draws drops 5-6 points, which is only a draw and a loss, we shouldnt take advantage? With regards to being contenders, what does that actually mean? The rule of the league is that whichever team has the most points after 38 games wins the league. Nothing else matters but the… Read more »

2nd place gets more prize money from the Premier League than 3rd.

2nd gets us a direct ticket into the CL without having to play those annoying Qms, and thats the difference with 3rd place

So we can say Fuck You to the Manc Oilers?

It gives the team a target to strive for that won’t have them shitting themselves come final day too. Having something to gain rather than something to lose is always easier.

Exactly why teams losing often play better than they do at 0-0 or when they’re winning.

We’re losing our first seed as of next season because UEFA have change the seeding system, so if we finish second we would be a second seed in the pot, if we finish fourth we would get a 2legged qualifier and a fourth place seed- should we progress.
Also the sooner we qualify for next season’s CL tournament the sooner we can start to improve the weaker parts of our squad.

Not to be a pedant, but I think you will find that we are not 3rd in the league in goals from corner kicks, but tied for 4th.

Yup, 4th means there are 3 people in front of you. Not sure who disliked your comment.

I love seeing less possession for us. Usually means we win!

I’d like to see your stats on Ozil and Sanchez working with each other; they seem to starting to really play together in ways that bring a lot of promise. Also, no doubt people will be trashing Ozil for staying forward, as your stats demonstrate, but isn’t that what he’s supposed to do?

Alexis hasn’t scored with Ozil on the pitch. Crazy star.

Maybe PL then. I got this from the Guardian Football Weekly podcast.

We have to the time of the season where Arsenal may not be pretty to watch but will get the job done. Expect us to get the highest number of points in 2015.

So you mean to tell me that we put in an away performance at our home with three valuable points as the end result? I ll take it!!

I’d love to see the stats for Coquelin, thought he had a very good game overall.

I think 2nd is very doable – are we too far behind to catch Chelsea? Probably.

Very much a team performance when observing the game, but in looking at the stats, Cazorla’s performance really stands out. He showed superb defensive technique at Malaga and now he’s combining that with his playmaking we’re seeing the real Santi. Some of his tackles today made it hard for me to believe it was him (crappy stream didn’t help either!)

i still don’t get people who don’t appreciate Ozil

Mesut Ozil ran further than any other player in this game (11.6km) & has 5 assists in 12 league games this season. I still don’t understand all the criticism surrounding him. To quote the manager “he looks a much better player when you watch the match the second time.” The truest words i would say.

Where did you get that distance stat?

An excellent summary. Insightful as ever from 7amkickoff. I do enjoy your way of looking at the game.