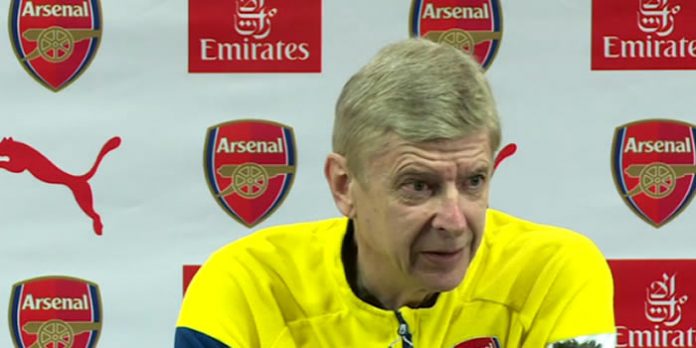 Arsene Wenger has confirmed that Alex Oxlade-Chamberlain will be out for three to four weeks with a ‘classic’ hamstring injury.

The midfielder limped off against United on Monday night and could now miss up to four games for the Gunners, as well as England’s Euro 2016 qualifier with Lithuania and a friendly against Italy.

It’s a classic hamstring. That means he will be out for three weeks, four weeks maximum. He will not be available for England as well,” said Wenger of the England international.

“It’s very frustrating for him because he played more games than ever this season. In the last two months I feel he was a bit in and out. He has shown again on Monday night what an important player he can be for Arsenal and for England. It’s a shame that in the final sprint and he’s not there.

“How much I don’t know but it is affecting him because he loves to play. He is keen to play for England and I think it is a big blow for him. He knows as well that it is the type of injury where you can recover quickly and come back. But it is not an ideal moment.”

In better news, depending on your thoughts on his manic Gallic style of play, Mathieu Flamini is available for Saturday’s match against West Ham United.

Gabriel, who was substituted in the 2-1 win over QPR, is also due to return to training on Sunday and could face Monaco next week.

Arsene also gave an update on Mikel Arteta, revealing the club captain returned to full training today and could feature in three weeks. The Spaniard hasn’t played since the November win over Borussia Dortmund. He underwent surgery on an ankle problem initially sustained against Besiktas back in August.

I tought Wilshere will be back very soon… what happened?

On a completely separate note it’s about damn time the media starts calling out Mourinho and his fucking antics. Well done Souness on Sky. Saddest part of it all is Fabregas also playing along to this. I thought he was above “being a cunt”, but the longer this goes on the more he is dragged down to Terry’s level. Somebody needs to sign him and Hazard off of Chelsea, that will make hating them much more natural. Costa, Terry, Cahill, Mourinho, all these fuckers.

A classic Arsenal injury is what he meant to say

Like the fact there is the international break for him to rest in.

3-4 weeks? Those days I used to dread hearing that from Wenger as it mostly meant months. However, since we “signed” Shad, things have been improving massively. Giroud and Gabriel a prime example of that. Finger crossed Chambo surprise us Too.

Another reason why we don’t dread “3-4 weeks” nowadays is that we’ve first class cover in everywhere on the park. When your current bench has the likes of Ramsey, Rosicky, Walcott, Chambers, etc. it’s difficult to be over-worried about who we have available to field for any particular match.

Not only are the injury times coming down, but seemingly also the severity.

Fingers crossed we can keep this going down the final stretch of this season.

I think this whole Shadz thing is getting out of hand now tbh. He’s leading our Strength and Conditioning, which is hugely important, but he’s not the Head of Sports Science; he’s integrated into an already existing system. I mean it was only a few months ago when we were decimated with injuries that people were questioning Shadz as if he were some kind of magician able to cure our injuries woes with some kind of anime alchemy. Now it’s a 180 degree turn and everyone is giving him credit for everything? There are about 20 guys in total at… Read more »

And that’s without even pointing out the obvious fact we’re still the most injury prone club.
People wonder about our medical department, but honestly think about this for a second….. Ox just returned from a groin strain (hip flexor are usually the antagonist muscles to the poster-chain; gluten and hamstrings. So if one is being overworked, chances are so is the other) and after how many appearances, was already starting a game? Even I was surprised when I saw him on the start sheet, and thought “isn’t it too soon?”

And the next thing…..

What about Debuchy? He was supposed be back in Feb?

Came back, got injured again. Reminds me of another French player whose name begins with D and ends in y…

My name is my name
Reply to  GS

He was ruled out for three months half-way through January.

Ah the classic hamstring, I do believe Audrey Hepburn and Fred Astaire both had them. Back when a side of mutton was a shillng and five pence and you never had to lock your doors.

Came back, got injured again. Reminds me of another French player whose name begins with a D and ends with a y…

Is there an echo in here?

If A O-C’s injury is ‘classic’, what does that make poor Diaby’s injury?

A collectors item… no, wait…

surely Arsenal can hire someone to sort this out rather than rely on shad fixing them – prevention is better than losing the league.

We currently have 8 injuries altogether

Only Liverpool in the top 4 challengers have as deep an injury crisis.

Blogs should have you guest post, because that’s some great insight right there. Definitely would love to have someone do some in depth analysis like this about our training regimen and the injury stats you speak of. great comment…

Thanks : Blogs i am available at great cost / nothing 🙂

“Only Liverpool in the top 4 challengers have as deep an injury crisis.”
Interestingly though, guess who is the only team above us, in the form table?

^^ above stats are basic calculations and do not take into account the severity of the injuries.
If they did I’d see their entire injury roster and raise them a diaby

Interesting post, but I absolutely hate your avatar: it’s ugly and scary.

Get one showing Adams scoring that goal against Everton. Or maybe one of a young Anelka seeing off Newcastle at Wembley.

Ox will be a big miss

Feel sorry for the ox, bad time to get injured. If he can bring theos goal scoring into his game he will be a perfect player. Lets beat west ham tomorrow boys! Lets do it!!!

Fool of a Took

Poor warm up, poor stretching, to much sprinting during training, not enough ice baths, to much/to little massage, a combination of everything?

Johnwaynesimpson
Reply to  Fool of a Took

Then shut the eff up man!!

This isnt a fuking coincidence is it. We suffer more muscle injuries than any other team in the league and have so for years. Yet nothing seems to have been done regarding prevention. Didn’t the ox and ramsey come back from injuries to then suffer muscle injuries almost immediately after returning? They hadn’t been overplayed prior to this so why is it happening? The emperor’s big boots says “we live in a world where there is no obvious reasons as to why we suffer more muscle injuries than any other EPL side” What a load of bollox. Its not rocket… Read more »

It’s true, you’d think we’d bring in a new guy with good experience at the top level, or maybe even start looking for someone to deal with these muscle strains.

that’s it, bring in a new guy, give ’em half a year and then fuking cut him. Welcome to Manure. And love the bit about rocket-science, Foxy. Not like there are fine margins at this level, surely your bull-shit in a chinashop would get us just the perfect squad. It’s more than fair criticising our injuries but surely there have to be more moderate and thoughtful contributions, than suggest we are “falling behind”.

you are a clearly a deluded muppet oblivious to what has been happening at our club re muscle injuries. Last month alone we have suffered three muscle injuries, two from players who had just come back from injury and one from a player that only joined us in January! Having 65 injuries this season, more than any other club, whilst having a similar pathetic record over the last seasons is falling behind dickhead. And i never said chad should get the boot. But if this embarasssing record doesnt improve by next season please do respond me with your thoughts as… Read more »

You are aware we’re looking to recruit a muscle specialist for that very reason? And what is wrong with waiting to see whether Chad has made a difference? Do we get extra points for screaming at him to fix our players NOW?

I’m not even sure what the common denominator is, the red and white strip? Are we really thinking it’s due to a colour?

News elsewhere. If we lost a game or or draw at home then you hear everywhere ‘Wenger out’ bollocks. Now Chelsea has been eliminated by 10 man PSG what we hear? ‘Give him 75m more to spend’! I guess that’s the difference between Wenger and Maureen the Moaner

Every other day there is someone posting about training incorrectly , muscle imbalances bla bla bla.

Surely a world class football club would have world class training facilities and fitness and conditioning coaches who know these things. Surely… ?

Yes. Some people just like to be clever on the interwebz.

Shame about the Ox but I can’t believe some people forgot how they were salivating the Ozil and Walcott prospect. I can’t wait for that. I hope Walcott thrives the next few months and with Welbeck we’ve got pace everywhere. Alexis can’t bear the brunt of every goal and certainly not Giroud, his injury brought him a much needed rest. Walcott’s goals might be his primary forte in his game but as the old saying goes, you can teach someone to defend but not how to attack (with the latter being mostly based on instinct). Before his injury, which lasted… Read more »