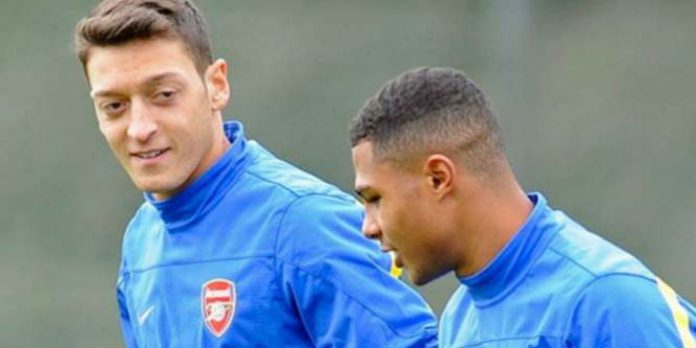 Serge Gnabry says he’s feeling better and better after stepping up his return from injury with a second game inside a week for Arsenal’s under-21s.

The German winger lasted the distance in the 4-1 win over Stoke City last Tuesday and got another 90 minutes under his belt last night as Steve Gatting’s side were beaten at the Emirates by Reading.

While the result may not have gone his side’s way, the 19-year-old underlined that being fit to play was enough of a boon.

“I am feeling good, I’m feeling better and better. It is my second 90 minutes [in the space of a week], I am playing and over my injury so it is all good and I am looking forward to the next game.

“It is always nice to play here, there was also a decent crowd so I was very pleased to be at the stadium again.”

Given the range of attacking options at Arsene Wenger’s disposal it seems unlikely that Gnabry will be handed a first team start before the end of the current campaign, however, he could well rack up more minutes during the summer if he’s selected to represent Germany at the under-21 European Championships in the Czech Republic.

It’s a prospect the attacker is looking forward to: “I have been away with the young national team for the past few weeks, which was a good experience with a good side so I am looking forward to the Euros so hopefully we can go there and win the title.”

Jack Wilshere and Abou Diaby also continued their rehabilitation in the clash with the Royals. Encouraged by the contribution of all three first team members, coach Gatting reflected: “We came out with some good positives. Abou Diaby was excellent in the time he was on the pitch and Jack Wilshere was outstanding – the best player on the pitch by far.

“Serge Gnabry got through it for the second 90 minutes he’s played for us and it’s minutes on the pitch that will get their sharpness back.”

He added: “We’re delighted when we get the first-team players, they all do well for us and give us that experience, and the boys learn from it.”

The under-21s next travel to Middlesbrough on Monday as they continue their push for promotion.

It’ll be great to have Gnabry back available for next season. His little cameos in the first eleven were exciting. Does anyone actually know what his ‘injury’ was, though? He was on fire and giving Wenger something to think about but then he just vanished.

With the uncertainty around Walcott’s situation (I’d like him to stay because you can bet he’ll have a blinding season if we sold him), It’s great to know we have depth in the wide positions.

Keep it up Gnabry!

He had some kind of serious knee injury.

You wanna fuck with me? Okay. You wanna play rough? Okay. Say hello to my little friend!

So… what that make you? Good? You’re not good… You just know how to hide, how to lie. Me, I don’t have that problem. Me, I always tell the truth… Even when I lie.

the hospital called looking for you..

Not sure..definitely not grass, atleast not the organic pure stuff…

The fuck are you talking about?!

See, you get it… Haha

Y’all haven’t seen Scarface? Has that stopped being well known?

Do we have to explain all our quotes on this site? Surely not, huh mate?

Help me out here – A team fielding Diaby, Wilshere and Gnabry lost to some U21 team?

It was Reading too.

Given that, I gather they are going to play their U21s against us on Saturday in the Cup.

That’s football for you. Reading’s U21 team seems to be very well organized, and when Martin Keown’s son scored an early goal for them on a corner it was always going to be hard for us to break them down. Wilshere was obviously on another level than their players, and Crowley and Gnabry are massive talents. Diaby didn’t seem very interested in the game, and delivered a disappointing performance. He was probably happy enough staying on the pitch for more than 45 minutes, not that I blame him for that.

Martin Keown’s son not with us? I did not know that..

Wilshere was outstanding but did not do enough to influence a win? With the under 21s? with Diaby too and Wilshere’s caliber on the pitch should have won

If only football were that simple

It must be an absolute nightmare to lose such a long period of game time in early development. It’s such a pivotal time for the development of a player. Some players move onwards and upwards like Aaron and some seem to be riddled by contrast niggles like Jack. I suppose it’s a lot to do with luck. Correct me if I’m wrong but haven’t Crowley and Zelalem also sustained relatively lengthy injuries already? It does make me wonder if there isn’t more we could do to protect our young players.

Bored*** why can’t arsenal play spurs everyday so as to get interesting stuffs to discuss….. Bring on Reading plsss Arsenal is on fire

I’ll be interested to see what Wenger’s plans for Gnabry are next season. I’m guessing league cup in the first half of the season and a PL loan in the second half. He could be really good for us in a couple of years time.

Why would he loan him out now if he didn’t a couple years ago? This is a big-time talent and Wenger will probably want to keep him close. Gnabry, if fit, can definitely do a job for us.

Gnabry – he was a little heavy coming back but looks like he is beginning to find his touch again last gme out for U21.

Could be another Bellerin step up for us.

We should not rule out Campbell either who put in a good performance against Madrid for Villareal. He could do a Coquelin.

Both these players need to show a good pre-season. There is space in the team for them (particularly with Walcott likely to leave) should they be able to convince. If they both do, they could only make us stronger.

I wrote 135 letters to Wenger. Inviting him and the whole board to come to see me so I can tell how to run this club. As they thought I was crazy, I attached a letter from my psychiatrist saying I was perfectly sane now and no longer on a any antispsychotics for the last 6 months. I swear I’m fine now but why they won’t come to me is beyond comprehension. And if you think I’m crazy, well see the posts from Henry Walcott above. Henry Walcott, HK1, Fatgooner and myself were all in the same ward. The difference… Read more »

Just for Lol
Reply to  AntiSpud

Fatgooner has always been crystal clear in his posts. To the contrary, ”Thierry Walcot”t is on crystal meth.

Were Trez and Ex-Priest Tobin there as well? Would make a lot of sense if so.

So you’re out then? I wondered why you weren’t answering the morse code on the heating pipes.

Squad has plenty room built in for emerging talents :

SAnogo and Campbell should be possible departures !

Antispud I enjoyed your post, had a good LOL

Anyway, I am looking forward to us beating Maureen!
Maybe I should be called “Optimistic Paul” but I really don’t see us losing or drawing anytime this season! COYG!

Thumb me down you “don’t tempt faters” but all is goooood!! IMHO

He is a better prospect then Sanogo and Campbell IMO

Kloppo just asked for his contract to be terminated in the summer… ‘D’ like to see him as arsene understudy and then take over in two years. Not gonna happen though. We’ll be fine.

Would rather see him go to Man $chitty to replace the soon-to-be-gone Pellegrini, and continue $chitty’s slow but sure decline.

In the photo above, Ozil looks a bit like Count Chocula.