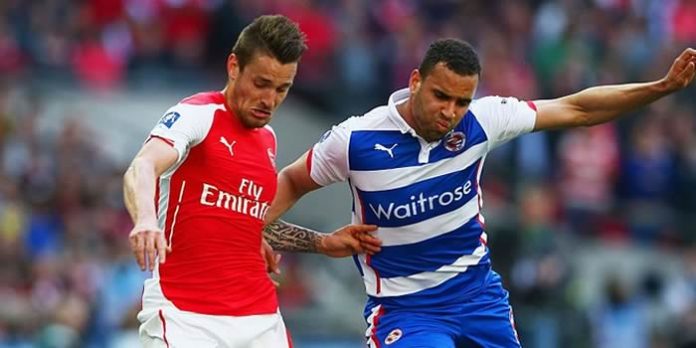 Arsene Wenger has revealed that Hector Bellerin has been playing with an ankle injury for the last few games, and that was a key factor in his decision to start Mathieu Debuchy against Reading the weekend.

The French international hadn’t played since January when he suffered a dislocated collar bone in the win over Stoke, and seemed to find it hard going at times, as you would expect.

And while admitting it was a bit of a risk, the Arsenal manager backed the quality of the former Newcastle man to perform against the Championship side.

“It was a bit risky,” he said. “Bellerin has played recently with some ankle problems and Debuchy was back so I thought it was a good moment to do it.

“Debuchy had cramps just before the end of the game but I couldn’t change him, but he is a French international and must be capable of playing in a semi-final against Reading.”

And with Chelsea coming up next week, it’s probably not a coincidence that Debuchy was given some playing time to up his match fitness.

Let’s hope he didn’t suffer any ill effects from the 120 minutes.

I still firmly believe theres a Jackson 5 Blame it on the boogie/Blame it on Debuchy song to be scribed…The only problem is that I cannot bare to blame anything on the beautiful Frenchman.

I always prefer that Marko Arnautovic’s name is mentioned as often as possible as the coward who pushed Debuchy while he was still in the air.

(Really struggling to fit it in to the tune!)

He came down here from Tyneside
Spent time on the side lines
Now back on our right side
Matt debuchy!

“Mats, Debuchy p’on de right hand side” to Musical Youth’s Pass the Dutchie doesn’t get anywhere near the coerage it should do. Couldn’t be a more perfect fit.

Debuchy Debucy!
He costs a lot like Gucci.
We didn’t buy him for booty.
Just a fucking FA Cup trophy.

It did seem an odd selection, but with Chelsea coming up it was probably the right one. Overall though I thought Arsene did underestimate Reading and playing with two full backs with little playing time recently probably contributed to our mediocre display.

On the other hand, we won, and Gibbs and Debuchy got some much-needed match time. We need to keep the squad fired up and ready, we’re going to need them some time anyway. I believe it was the right call (even without Bellern’s ankle problem). If we hadn’t needed to replace th BFG, I also believe Wilshere might have got some first-team time on the pitch, too.

Let’s beat those cunts and push away from the Manchester clubs.

Any club/manager will have to out spend Wenger to finish above us even then most are not successful or in Tots case never!

Precisely…there seems to be a lot of backtracking to explain dubious choices and a lack of preparation.

Sometimes getting thumbed down is a badge of honor…especially amusing as Debuchy himself has now admitted he wasn’t fit.

Additionally, regarding the preparation against Burnley and Reading …Wenger and players expressed ‘surprise’ both teams gave us a game. This would be one team fighting relegation and the other in the semi-final of the FA Cup.

not at right back tks ….

who then? we almost blew semi and Coq may explode under stress

Does that mean Debuchy will start against those arseholes from West London? On yesterdays performance I’m a little confused as to whether that’s a good idea??

hopefully, the extra experience should help, and if we end up 1 up trying to hold on having bellerin ready for all the fullbacks is a decent option

its not experience he needs its game time,
getting match fit, this boys a top player

yes it is, but experience IS game time, plus Bellerin is carrying an injury, so lets not aggravate it.

Would rather play debuchy and bellerin on the right ahead of Ramsey to checkmate hazard. We maintain both defensive stability and penetrative width. Nothing against Ramsey but let’s use bellerin the defensive winger. He can cross, score and defend

Whereas Ramsey can do none of those things.

Ramsey can yes, but the issue is containing Hazard who is not only quick but on form, We have seen bellerin with a propensity to lunge in at quick players, this is risky with hazard who loves diving into the face of players to win free kicks and penalties. Mat is rusty but also prone to the occassional lunge. so the best way is to either double team him or cut off his supply which is extremely difficult with fabregas and azpilicueta. Ramsey drifts in so much that either of them alone will be exposed on the counter, Feel free… Read more »

Dubuchy in for Chelski game to sort out any Hazard!

Can’t argue with that

I hope he improves on the Chelsea outing.

A bit unfair to Bellerin to be dropped and replaced by Debuchy. If it’s for injury concerns, that’s one thing. But if he’s fit and healthy for Chelsea but Wenger persists with Debuchy anyway, I think that would be a bit harsh, plus Hector is on his game atm. And I’m a big Debuchy fan btw, so I’m not hating.

If Debuchy plays you would think gibbs has to as well, for the sake of balance. Monreal is very debuchy-esque and has played well when balanced by the gibbs-like bellerin.

In that case fuck it play Bellerin!

All our full backs are quality. Chambers is lower down the pecking order but can still do a job if required. See him as the utility squad defender which at his age is great. I think you’ve got to go with Debuchy against Chelsea though. I rate Bellerin, especially going forward but he has had the occasional rush of blood to the head with the odd rash challenge that against a team like Chelsea could be the difference between winning and losing. I’d go Monreal on the other side purely based on consistency. He’s been on form recently and I… Read more »

I would play Bellerin in the Chelsea game. He has been consistent enough and I think his muscles will endure the physicality better that Debuchy’s considering he has played more. Again, I think Hazard would outpace Debuchy too much. Bellerin can run him down then Debuchy can kill the game in the last half hour or so.

Most relevant arseblog news picture ever.

And for Bellerin to perform at the level he has with that injury goes to show the commitment he wants to put in to stay in the first 11. If the rest sorts it out, he has to start before Debuchy. Versus Chelsea is not a game we can let DeBuchy get his match fitness back.

Worst player on the pitch on Saturday. Not his fault, was well rusty as you’d expect. A week either side of the semi play your best side….surely? Saying that, we are there! Up the Arsenal!!!

Totally agreed, I was surprised he didn’t play at the time, and now looking back it seems like a very poor decision.

Dont you think Arsene had thought of that? And he didnt do it because of some reason?

Obviously he had some reason. Just because he thought of it, that means it was right? Debuchy had a poor game and was guilty of a few giveaways that on another day could have very easily led to goals for Reading. Was that part of Wenger’s plan?

8 days should be good enough to recover from the 120 minutes. C’mon lets do the rent boys

Bellerin is our future and will be the best right back in the country if he continues to play. However as always Wenger will fuck it up because he has his favorites thank god Arteta is still not fit or he would have started mark my words as soon as he is Coq will be dropped, Debuchy is French ????? the reason we are doing well is because injury has caused him to make the right choices and there is consistency the choice of Schezny playing in goal almost cost us since when does a goalkeeper need a rest ffs… Read more »

Umm you do know we won, right?

Bellerin for the weekend game against Maureen, he’s shown he can play and his pace will be very useful against Eden. I’m totally behind the team no matter who Le Prof selects to start.

Szczesny Debuchy Chambers Gabriel Gibbs Arteta Wilshere Walcott Oxlade-Chamberlain Rosicky Welbeck
Has any other teal got a better reserve side?!?!

I think most PL teams would kill to be able to put out a line-up like that. Sure we can quibble here and there over whether a player is first XI or second XI, but the gist of it is, our depth right now is second to none. And you haven’t even named Diaby, Zelalem, Akpom, or Gnabry. Amzaing depth we’ve got.

Bellerin playing on a sprained ankle? says alot about Chambers then.

Maybe, but it says more about Bellerin.

Of all the many things that get on my wick about fans – hindsight management is right up there with the worst. If Bellerin had played Saturday and broke down with an injury how many know – it – alls would have gone on about Wenger overplaying him? Then afterwards if Wenger had said he’d played him despite him having a small ankle problem, you’d have gone ballistic. How many of the same fans would have backed the manager had he said in July – I dont need to replace Sagna cos we have Jenks and Bellerin? Now they go… Read more »

The way bellerin has been playing I had no idea he had an injury! I agree with a few, Debuchy and Bellerin on the right against Chelski but hey, Wenger is manager not me!

Any one who played at right back should just curtail any potential hazard that may surface. Avoid penalty he is trickery when he is inside the box. Beat those cunts at the west side at all cost please.

He’s not only a French international but always has been better than Sagna.

am up for bellerin for chelsea game.hope am not hurting debuchy koz he is not fully back to his fitness incase he is a good left back.