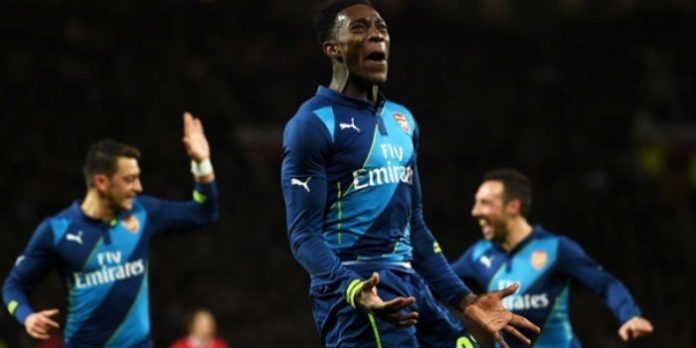 The England striker hasn’t featured for the Gunners since the 0-0 draw with Chelsea at the end of April and is yet to return to training.

Speaking to the Press Association after yesterday’s final league match of the campaign, Wenger confirmed the bad news: “Welbeck will be short because he has not practised yet.”

The news will come as a real blow for Danny who helped the Gunners to the final with his match-winner at Old Trafford at the quarter-final stage.

The 24-year-old also started the semi-final against Reading in place of Olivier Giroud meaning Theo Walcott, who yesterday scored a hat-trick, may well be in line for a start up front.

Alex Oxlade-Chamberlain, who made his comeback yesterday after two and half months on the sidelines, could still feature at Wembley. While the midfielder looked pretty rusty during his 15 minute cameo the boss expects another week in training to help his cause.

“He’s not completely there to start at the full pace of the game,” said the boss. “He can play. It’s just when he’s ready. One more week of preparation will help him.”

Sucks for him personally as he’s never won this competition and has played a big part in us getting to the final.

He will get a medal though. Won’t he if we win?

I think only players on the bench get them?? Besides imagine winning a title and not getting on the pitch, there’s really no pleasure there.

yes, he will get a medal

That’s a shame. I guess Giroud up top and Theo on the right to start with?

That’s what I would do. Theo isn’t the best defensively but he’s no Arshavin.

I would fancy the team that wenger put out against WBA except bring Sanchez on later as he looks absolutely shattered. Put Theo there and have Giroud upfront then move theo up top and sub giroud for sanchez at 60min. Damn shame for welbeck as he is actually a damn good player

Sad for him, but had already counted him out in my head anyway.

My final line-up:
Ospina (would have played Szczesny, but not without any match practice for 6 weeks)
Bellerin-Mertesacker-Koscielny-Monreal
Coquelin-Cazorla
Ramsey (coin toss with Wilshere)-Özil-Alexis
Walcott

Good line-up, except my coin toss would have Wilshere starting over Ramsey. I’d also consider the goalkeeper to be a toss-up – Ospina has looked decidedly shaky the last few games, and I can’t help but think that Szczesny would have got to the cross where WBA scored yesterday.

I agree. Based on Wenger’s actions last year, there’s no reason to think that Szczesny won’t start the finals. Plus Ospina is definitely not looking up to par at the moment.

I’m sure Danny will come good next season. He’s just left his boyhood club (and celebrated). He’s had a chance to settle now, plus after the time out he’s had he should be motivated to kick on.

with his great hold up play and lack of finishing (I think Walcott has more goals than Danny now), would Welbeck not make a great DM or central midfielder?

I’m sure I’ll get thumbed down for this, but I was just thinking creatively.

Hard luck.
Reminds me of ox last year. Shit. Why did I bring that up. pardon me

I have faith in him. He will come good.

Absolutely not a full-kit wanker like the john terry of cunts.

Arseblog, can we get a poometer rating on Arturo Vidal?

Just so you know.
There are “rumors” about Vidal coming to Arsenal with a bit of help from AS17, in a Chilean newspaper.

Just had a look at his skills and stuff on youtube but I have also looked a Le Coq’s tackles as well.
Its always worth remembering that we have some great players and if we didn’t have them already we would want them!

Vidal would be good competition for Coquelin, and the rumours seem to have quite a strong grounding. However, I won’t believe it until Arsenal announce the sealed deal.

Wouldn’t it be nice, though, if we got all our business done before the window opened?

It’s funny how easily I let myself forget what silly season feels like. If you’d have told me there was a deal in place to sign Vidal after the Copa America, back in February I’d have laughed you off the podium.
But now.. Must.. Not.. Believe.. Argh

(Your line up) Can’t go into that game with no holding mid.. Villa can break at pace and they’d butcher us if there was nobody to halt them.
Plus ox is not match fit, certainly not to start a final.
I’d go

Just as a comparison, Lescott was bought by City for 22m quid! Walcott cost us 15m Illustrates the ridiculous nature of the argument that we can compete across the board against the likes of CHelsea and City for price and salary. We can compete selectively now for top signatures but we have to be very careful where to pick our fights. Don’t believe a word about this Arsenal had a first option to sign Fabregas. Fact is it was a position we did not need strengthening in lieu of distraction to other more pressing needs. And if we cross Chelsea… Read more »

The (arguably) common sense that it was better not to buy fabregas does not make your claim about the nonexistence of our first option justified. I for one find it quite possible – to have such a clause would not cost barcelona a penny, would improve their negotiating position, might have seem as a good plan B by the Arsenal, and no one thought fabregas will be send packing in three years anyway. I’m not saying there was such a clause, but it would certainly make some sense.