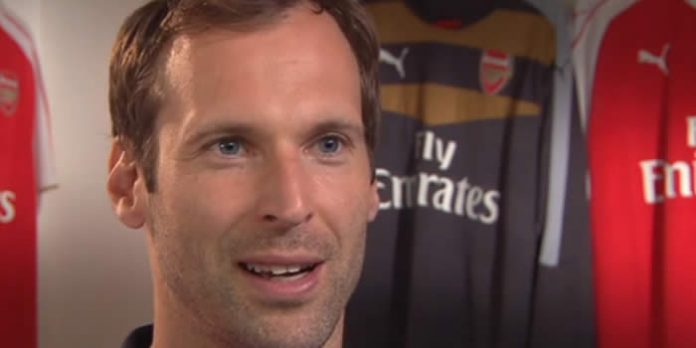 Arsenal’s latest signing, Petr Cech, has spoken of how conversations with Tomas Rosicky and Arsene Wenger helped convince him that a move to a club considered an arch-rival to Chelsea was the best one for him.

Rosicky and Cech are both Czech internationals and he says he got the good word from Tommy about life at the Emirates Stadium.

“Yes, we have spoken,” he told Arsenal Player. “Obviously we had time together with the national team but at the time I did not know what would happen.

“But he seems happy always and he loves playing for Arsenal. He was excited about the idea that this could happen.

“He told me a lot of good things and he was one of the reasons why I decided to give it a go and meet with Arsenal. Then the discussions went on and here we are today! I am really happy it happened that way.”

And, of course, he met with Arsene Wenger who impressed him with his ambition for the club – ambition you might even say is evidenced by his decision to spend over £10m on a 33 year old goalkeeper.

“I had a good chat with him and it was the first time after the club approached me that I could speak to him in private for such a long time,” he said.

“He made me believe that this was the right step and that this is the club with a lot of ambition. I have a lot of personal motivation and ambition and the club definitely matches it.

“It is an exciting time for me, it is a project where Arsenal fans and the club have been waiting for the Premier League title and this is a chance for me to bring my experience and my little extra to the team and we can possibly achieve that.”

And with his debut potentially against his old club in the Community Shield on August 2nd, Cech says friendships will be left to one side for the duration of the game.

Lettra
Reply to  AN other

Sorry just Cech but it puts us in a great position for May (t).

He wears a magic hat!

And when Mou told him stay

he said YOU’RE A FUCKING CUNT and a fucking twat

Am glad Petr Cech’d in.

Many said Van Persie was not needed at Man U when Sir Alex signed him. Now some are saying we don’t need Cech. They’ll eat their words when we win the league next season.

I wonder whether part of Arsenal extending Rosicky’s contract was as extra leverage in this transfer? Probably not, but hey, it’s not really the transfer window without a few outlandish conspiracy theories going around.

We couldn’t get Lollicon so we offered him some LolliTOM ?

When I was a kid us subs spent quite some time warming the goalies. This is no slight on Thomas by the way. His time may come I think we will be involved on more fronts so whole squad is needed. Arsenal just got stronger and as it stands Chavs got weaker god forbid something should happen to Thibout , like say slipping in the shower.

Fucking brilliant! An outstanding goalkeeper, multi-experienced and a good personality. Hats off to Wenger (again and again and again). Top top wind -up. Fuck you Mourinho.

Does multi-experienced mean he has more than one experience or what?

ok youre right …maybe i should have said ‘very experienced’

How many wives you got then AllGuns?

However many it is, I sure hope he doesn’t let John Terry around any of them.

I wouldn’t let John Terry anywhere near my right hand if my life depended on it.

How many right hands do you have?

To be fair, would you want to be married to someone who would fall for John Terry’s, uh, “charm”?

didn’t he said some weeks back he won’t interfere in the Cech Transfer? apparently, our favorite No 7 has learnt some transfer tips from the Chess master Wenger.

Welcome Cech to a proper club with a proper manager and an absolutely fantastic proper Fans.

I’m not suggesting we’ll definitely win the league next season, but our chances have just got better

Great from our Rosicky a faithful servant to the club

I’ll believe he’s a good signing when I see him actually perform well on the pitch. I can’t bring myself to trust Chelsea, and deep down I struggle to believe that they would sell us any player unless he’s damaged goods.

I must admit I had similar misgivings. Why would Mourinho and Abramovich, the two biggest assholes in the Premier League, let him come to us, and why would John Terry–the third biggest asshole–say how much he would help us?

Can only imagine the confidence Ozil Sanchez Cazorla Koscienly Ramsey et all will draw knowing fucking Petr Cech is behind them in goal. UCL we are coming!

Confidence goes both ways though. Cech needs a defensively disciplined team in front of him. PL is full of players capable of placing the ball out of reach of the best goalkeeper in the world, if defenders do not wrestle with them.

“I had a good chat with him and it was the first time after THE club approached me that I could speak to a human being in private for such a long time,” he said.

Says a lot about Chelsea.

As I expected when reading between the lines, Arsenal took up the option on Rosicky’s contract in order to smooth the way for Cech to join. Smart move, as the club would not want to have Rosicky sign elsewhere and give Cech pause to consider other destinations himself. Better to have all signs point to Arsenal as the one obvious, comfortable destination.

Yea because cech is only 19 years old and a newbie in this league and he needed his compatriot TR7 to settled him down in the new league ! Wenger took up the options on Rozza contract because he is important player for us despite not playing much, but when he was called he played great and scored some vital goals for us, and wenger knows he will need rozza for boxing day period to bang some goals and wins some games when the other stars who play regularly need a rest. I would like him to get more playing… Read more »

Yeah not sure it works like that! Rosicky is near-legendary and has been a great servant for us. Still, worked out nice in the end.

Didn’t expect Cech to be so likeable. He washed Chelsea right out of his hair!

Sure it can. Another factor is that you take up the option so that you have some residual value for the asset if you do decide to sell. Let’s face it, Rosicky, great servant that he has been (when fit), is today surplus to requirements in the current Arsenal squad. But, by taking up the option when they did, prior to entering into negotiations with Cech, Arsenal ensured that when Cech looked at the Arsenal roster, he saw a friendly face. It never hurts, as even adults like to work along side friends (not just 19-year-olds “newbies”). To sell Rosicky… Read more »

Wow, you will be successful as a tabloïd journalist. You seem to read Wenger’s mind or make it up so easily.

What do you think the over/under is on the number of appearances Rosicky makes for Arsenal next season, all competitions?

That’s the last bit of class they had, coming over to the classiest club in the league. Poetry I tell you.

Did not see this signing coming! You would think the media would of heard a whisper.

Perfect summer transfer market for us will be – cech-in, caravalho next one, and benzema to be the big surprise like ozil at the last hours of the transfer deadline day when fat benitez decide to sell him to us 🙂

Rosicky rosicky. He was saying no long ago that he wouldn’t interfere. In the meantime he was campaigning in the background. Well done sir. Damn! just realised that now I will have to buy a rugby hat. Welcome to the biggest club in London Cech.

Any update on walcott situation??

First player to ever win the champions league and sign for arsenal?

Wrong. Thierry Henry in 2012 was on loan but I think that goal against Leeds still counts. Oh and the other winner against Sunderland got us 3 points that might just have gotten us 4th…

When Arsene caught Szczesny smoking in the shower, I bet he just gave him “the look” …….

I’m lost for words. Absolutely speechless. Why? How? What? Why? Phil Jones has re-signed with Manure!

Arsene’s a bloody cheapskate! Should spend like Liverpool and Spurs.

It’s Silent Stan’s fault. He doesn’t make any noise in public like Mike Cashley at Newcastle.Now that’s an owner with some passion.

Sounds like rosicky straight up lied to cech. “Ohh yes I’m just the happiest little mozart, sitting on the bench and celebrating happily with teammates after winning the fa cup!” Either way it probably shows how much he loves arsenal. Just feel bad he won’t find too many minutes

I hope Arsene give Tommy first team spot in Community Shield game just for this transfer.

There are more and more rumours about Arturo. Remember I said it here first? Alexis is certainly doing some persuading at the moment

If i had the money I would buy a club get them in the highest League and ALWAYS and I mean ALWAYS pick TR7 for the starting line-up, so that he gets the playing time he deserves. 🙂

Thats it my next Arsenal shirt is is gonna have the print on the back that says Tomáš Rosický. 🙂

Great signing.. I would be interested to know if blogs and a few others on here are still unconvinced about what Cech can bring to the team!

Mourinho tried to cancel this Chec but Abramovic wouldn’t let him.

First of’ thanks to Wenger for not doing his usual Eco’ but spent this much in getting Cech. Secondly we need one hold down midfielder (he can go for Mikel Obi) then another striker & we are set for glory.. Believe It…..

Very good signing, feel a little for Ospina who did well for us but if you’re going to win the league you need top quality from back to front. Now what else do we need to do in the transfer market..? I’m actually struggling to see how we improve further without affecting the balance we now have in this squad. The emergence of Coq was the final piece of our jigsaw for me but perhaps we go for a 2nd DM and buy the young Portuguese chap. Otherwise I think we’re well prepped and look good in all areas –… Read more »

@Cygan; you got that wrong mate….saying that Cech is the first player to win the Champions League and join Arsenal.

You may find that Kanu (remember him?) did it first.

Cech was asked if he was looking forward to the challenge of playing for Arsenal.

He replied ”Of course. It will be a huge challenge playing behind 4 defenders instead of 10.”

Can we dress him up as Robocop in goal? That would be bad ass.

I am Jesus biscuit