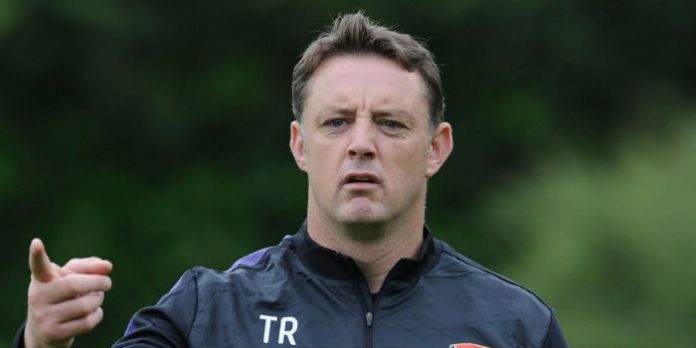 On the books at the Emirates for seven years, Roberts initially trained the club’s youngsters before he stepped up to first team duties in 2010 where he assisted Gerry Peyton.

Welshman Roberts is close to both Wojciech Szczesny, who thanked him personally when he signed a new contract in 2013, and Lukasz Fabianski, who he’ll hook up with at the Liberty Stadium.

The move heightens suggestions Arsene Wenger could use a move for Petr Cech to also lure Chelsea’s goalkeeper coach Christopher Lollichon to London Colney. The French coach oversaw the Czech stopper’s rise to prominence at Rennes before following him to Stamford Bridge in 2007.

Reports also surfaced this morning that David Ospina could be sacrificed to help push through a move for Cech. The Colombian international has been tipped to move to Turkey with Fenerbahce supposedly making €5.5 million offer to Arsenal.

Cech and Lollichon in!! Suck that José!!

I hear this pleases Cech.

well, i hate to says this, but it seems to me that many here just want Arsenal to buy Cech because that weakens chel$ea. the thing is that cechs days are well and truly over. he makes many mistakes when he plays, so better be careful with what you wish

kos the boss
Reply to  jacksonmonkey

Cech is an incredible keeper .He almost single handedly won them the champions league(especially the tie against barca) only a few seasons back. Look at all the great keepers who have played for our club and tell me that wouldn’t cech be right up there with them

Leaves a sour taste in my mouth, pushing out one of our keepers and a coach to bring in two Chav$.

A blue can still become a red. What better way to stick it to José than to win the league with the most clean sheets courtesy of his previous keeper?

He’s needed to go for some time now, our ‘keepers and their development hasn’t been good enough. If it serves to bring in Cech, added bonus

What about people who dislike Madrid? Do they think we shouldn’t have bought Ozil? Or what about Barca haters? Obviously Sanchez was corrupted by them. Never should have come over to Arsenal…?

All change with the keepers and their coach.

Cech looking more likely now, and his coach (more likely than Szcz’s dad, for one).

Whats the rating on the Poometer?

Off the fucking scale, if I had anything to do with it.

This should be the Mart Poometer

Not believing Cech’s signing till Wenger says so. Arsene knows.

Well I for one will be sad to see Ooooospinnnna leave but at the same time extremely glad to have a keeper of Cech’s outstanding ability come into the club.
Up yours Mourinho !!

I for one welcome our new goalkeeping overlord

I’m very sad about Ospina. I really liked him and rated him more highly than Szczesny, despite his lack of height. Still, I can’t help being excited that we may be getting a much better coach. This one is allegedly to goalkeeping what Shad is to fitness, so all these improvements in the backroom staff are massively encouraging. I hope he’ll have turned Martinez into a world-beater in two-three years.

When you consider Mourinho’s wind-up suggestion that he’d take Ox in exchange for Cech, we seem to be coming out of this deal rather well. Kudos to Gazidis.

Anybody else see the misfortune in the Lollichon name?

Christ if we don’t get Cech now it’ll suck. I’m all for having a multiple PL winner and his long time coach mentoring Szczesny… Cech short/mid term- Chezzers and Martinez long term!

GunnerDareMACEDONIA
Reply to  The Only Olivier is Giroud

I believe in cech rumors because wenger wanted to sign him before he came to chelsea and he always talks highly of cech and he is admirer of his and he also said that he regrets that he didn’t succeed to bring chech to arsenal. But i’m little skeptical about ospina rumors going to fener, Turkish media already reported that poldi, cambell, duch skunk rafael and host of other player already signed for fener and galta, which none of them happen. we will wait and see we all like szcz and opsina but the difference between them and cech is… Read more »

So whose your dealer?

It doesn’t matter who leaves between Szsz and Ospina. If Cech comes in, either will be 2nd choice.
I know Ospina racked up great stats and Szsz was joint best keeper in the 2013 EPL, but none of it matters as we wouldn’t be seeing much action from them.
And that’s fine by me. Petr Cech is a legendary keeper. We’ve been clamouring for this for a long time. I hope Arsene signs him and his coach.

And in that case I would be okay with Ospina leaving. If Cech could mentor Szcz we would have the long term GK position nailed down. World class breeds world class.

Even without the Cech angle, there has long been talks that as a gk coach, he was not really well liked behind the doors.

Ironic you mention Fab liking him and him going to Swansea, as it was rumoured those two didn’t get along, and this was further hinted on when Fab left and thanked everyone…..everyone but him.

You’re getting your coach’s mixed up. Tony Roberts is the one Fab and Szc rate. Its the current first team GK coach they reportedly have a problem with.

I saw Tony Roberts play for Dagenham and Redbridge a couple of times. He was always great to watch because he used to muck about and entertain the fans behind his nets whilst the game was in progress. And when you’re watching a League 2 football match, you need all the entertainment and distractions you can get…

Cech might help Szczęsny grow up. It has always been his character and temperament in question, not his raw ability. You would have to say that Szczęsny has more natural talent than Ospina, I think. So I would be OK with saying a fond farewell to Ospina if Cech comes, even if it robs us of a damn good chant.

What is this ‘natural talent’ anyway?

screw you labour visa section for all your help. we should have got him years ago.

I can’t get excited about Cech, he is a great keeper but I don’t think he is a big enough improvement on what we have. I would rather we strengthen upfront. I appreciate the two aren’t mutually exclusive but I don’t think we need a keeper. If he helps us win the title I will eat my hat… And Cech’s too.

Keep telling yourself that….

Cech is a disgusting chav piece of dirt. He shouldn’t set foot in our club.

Tobin you should get another hobby!

All leading towards the Cech deal getting closer. Can see if being tied up by early next week. If Ospina goes he can feel a tad unlucky, I’ve been impressed as he makes a lot of saves. Getting Cech would be a great signing though, 2-3 seasons at his best still..hopefully it can teach SZCZ as well.

How can we support someone we’ve hated and called a c**t for years….? Stick with our boys!!

By that logic, you practically couldn’t support near enough any player who moved to your club because he played for someone else. Stupid thinking, in other words. And especially ironic considering that some time ago we signed a keeper off our direct rivals who went on to become a club legend. That’s not even mentioning the Sol Campbell transfer either. Imagine if we thought like you and didn’t get him because he played for Spurs? Cech, as far it appears, wants to come to Arsenal out of all the available options. I couldn’t care less that he played for Chelsea.… Read more »

And, whenever I’m hating on Chelski, I make at least a mental note of “except Petr Chech.” He’s always struck me a decent human being, so in addition to all the benefits of bring him in, we’d be doing him a favor by getting him out of that honor-less club. 🙂

The back four will grow an extra foot or 30.48cm with the safety helmeted one behind them, making BFG about 8 feet or 243.8400cm tall, our midfield will have more confidence, another holding mid ? We still have the forgotten Gnarbry a potential Coq, would like to see Berinhio of wba added to front line for pace, not much outlay but strengthen our squad..

I refuse to get excited about a deal involving Moron. He would love nothing better than to leave us with our dicks hanging in the wind a la Demba Ba with us and Willian with the Shit team down the road. He’s a specialist in transfer cuntery.

i would love for this guy to take szcz with him so szcz could be #2 behind fabianski. that would be perfect.

It would be fantastic to have Cech and Szczesny in the ranks. Worried about Ospina though. Would suck for him.

to all those saying we have abused him before and it is difficult to get on board with the signing. This reflects the change in the game, an individualistic thing over the team. If he plays for Arsenal, we support him. End of story. Sure, this does not apply, or is difficult to apply to characters like John Terry, because he just is an odious person, but in general the team is the team, over any individual. Are you going to abuse Wenger for signing Cech because you don’t like Cech? Do you dislike Cech for something personal or because… Read more »

Cech is the new Cesc. What A̶̲̥̅♏ I smoking over here?

What if what we really wanted was the coach?