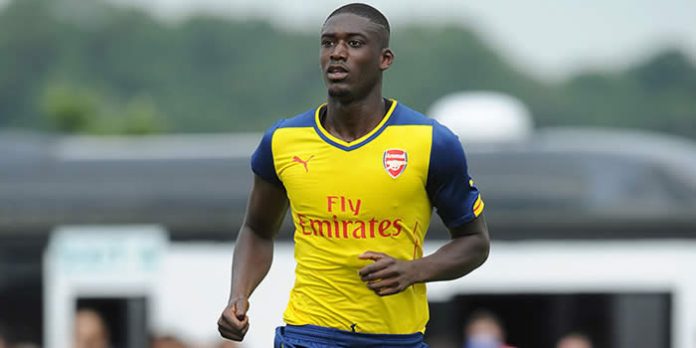 According to French publication Le10Sport.com, Ligue 1 side Lille want to sign Yaya Sanogo on loan next season.

The 22-year-old signed for the Gunners two summers ago from Auxerre and has since made 20 appearances scoring once against Borussia Dortmund in the Champions League.

In January the striker was sent to Crystal Palace to gain further Premier League experiences only for injuries to reduce him to eight games.

Lille are thought to have Lorient’s Jordan Ayew in their sights but they’ve been given hope by Arsene Wenger that a loan for Sanogo could also be negotiated. It’s claimed that a deal is 50:50 at the moment.

At 6ft 3”, Sanogo represents a physical threat, however, it’s also fair to say that his first touch, link up play and finishing are still very raw.

Given the attacking options available at the Emirates it is hard to envisage him forcing his way up the pecking order anytime soon, so a loan does make sense.

He is very raw, needs game time that he won’t get here.

Fingers crossed he can step up, though not very confident he can.

I think the penultimate paragraph sums it up quite well.. “…Sanogo represents a physical threat, however, it’s also fair to say that his first touch, link up play and finishing are still very raw.” Not great for a striker is it! He’s pretty much the footballing equivalent of a cat among the pigeons, his only job being to scare the shit out of defenders purely through noone- including himself- having the faintest idea of what he’s going to do. One of the few players Wenger has ever appeared to really believe in that I can see absolutely nothing in him… Read more »

Scored one goal every two games for Auxerre and the French junior sides, so can perform at some levels. Great physical attibutes.

Would be great if he did a Coq and stepped up, only time will tell. Good luck to him at Lille, there is no downside for Arsenal to him going there.

True, perhaps my comment of seeing absolutely nothing in him was a little far (not about Denilson.). Don’t think he got the credit he deserved for his control in the build-up pre-Dortmund, few nice little keepy ups in the box if memory serves. As you say, no downside with any of him really, it was a gamble- some pay off, some don’t, just so happens given our problems at the time he got a lot more media attention than he should have. Notice there hasn’t been much on Gael Kakuta, who’s been quietly ushered out the back door..

I dare say his goal scoring record at junior level was because of his advanced physical attributes, which are greatly enhanced against younger, smaller opponents and all but disappear at an elite level

Good point, though U21s and Auxerre that is far less likely.

Even at U21 level players aren’t exactly physically mature

It is international level though, so likely the bigger boys from each country will get picked, they aren’t going to grow upwards any more. And Auxerre versus men, though still the same scoring rate.

Anyway, all irrelevant now, let’s see if he can step up in the future. My feeling is that he is more of a Welbeck, may plateau due to imperfect technical skills, but happy for him to do a Coquelin.

Loan could do him well. He made a huge difference when he came on against Hull in last years final. Forever grateful.

MC1892, Basically he’s slightly better than Drogba at that age (Yes I saw him play once for Le Man).
Will he make a similar ‘step up’? Maybe, maybe not.

Are you all mad? The kid is “esss aache one T”!

I’ve always rated Sanogo but blogs is right, he is still far too raw and inexperienced. Here’s hoping that he can get some good game time under his belt and begin to work on polishing that first touch and attacking awareness.

Not sure the French league is the best option however – it’s very different to the Prem.

I would say the French league is the closest of the major leagues to the premier league. It’s more physical than any of the other European leagues (and arguably more physical than the PL now – look up the stats). The football is generally closer to the “run aaaaarand a bit” English style than other leagues as well.

Are you implying that Sanogo’s loan deal is to make room for Cech? FFS, I knew Wenger would switch him to a striker. Always plays his players out of position. Square pegs and all that.

This is good news.

Wenger sees something in him but his lack of playing time at Crystal Palace shows he is not ready yet.

So a season long loan will be the best outcome for all concerned. If it’s to a PL club, it would be even better.

Not sure going back to the French league will help his development too much as the leagues are different. But at least he will be (hopefully) getting more play time which will help him regardless as he is very raw.

I genuinely don’t know if he will ever become good though, but I do not have the benefit of watching him everyday in training

I actually think going back to France for a year would probably be best for him. He has experienced English football, he has bulked up physically, and he is probably starting to understand what he needs to succeed in England. But he seems to have lost the finishing touch and instinctive decision making that he presumably had a couple of years ago, when he scored loads of goals. If he goes back to an environment he knows (but at a slightly higher level), he can hopefully rediscover his end product and build some much needed confidence, before having another go… Read more »

Ah well. Shit ton of potential imo but if he’s going back to the Fench league, it’s not a good sign that he’ll ever fulfill it here.

Some excellent strikers have come out of the French league. If he gets a couple of goals against a lower team early on and his confidence goes up then it’s possible he could start banging them in and return as a top CF.
Yes, that’s a very big IF! but it could happen.

He’s so raw, his nickname in France is ‘tartare’. Sorry.

I trust Wenger’s judgment, and if he sees something in Sanogo, then there might be something there. But every manager is wrong once in a while. I’m glad Sanogo’s hard work was rewarded with that goal against Dortmund though. Plus Sanonegoal isn’t as likely to be chanted at him as Sanogoal.

I do like the lad. Reminds me of The Fash. Lovely pair of elbows.

I’d rather see him move to a Championship club so we can keep tabs on him properly. It’s a tough league and he’d also get a lot more game time.

Here’s to hoping he pulls a Coq!

We have faith in you!

You want him to what?!

Too early to give up on him and sell him (plus don’t think we’d make much at this point). If he goes out and loan and performs well then he will be able to come back into the squad or at minimum we can get a higher transfer fee for him. If he doesn’t do well we really are in no different spot than we are now with him.

Sanogo definitely shouldn’t go out on loan. Far better to keep him in the first team and play him in the most important champions league game of the season.

You are very funny.

Not sure most of the time if that is ‘funny – ha ha’ or ‘funny – peculiar’, though always try to give you the benefit of the doubt.

You have mellowed towards Fats!

Going by his previous performances in those kind of matches, I’d say it’s a good call.

Or is it better to play a winger of MF as CF when your leading CF is injured?

I don’t think Sanogoals has been given enough game time. Let’s hope he doesn’t stay at another club when he goes out on loan…..we may regret this loan deal? Worrying times…

Lille must be seriously stuck.

He’s 22 and never going to be good enough for Arsenal, he’s also far too injury prone.

Best thing to do is let him go on loan with a view to a permanent deal.

I would much rather prefer him to go to a pl club,if not then a championship side would do.

Not sure what kind of Sushi you’ve been having.

He’s got to go somewhere where he’ll get regular games and in my opinion he isn’t good enough for any Premier League club to take the gamble on to guarantee that.

When you add his terrible injury record and the fact he’s not that young i think we have a bit of a dilemma with old Yaya.

I want the guy to do well, I really do.
There’s something about him that I like can’t put my finger on it but he doesn’t strike me as a prick, plus I like his little dance when he scores.

Yep, I just wish we’d seen his ‘little dance’ a bit more often for us.

My hope is that he becomes another Welbeck. He does seem raw though, but still a good free signing to take a flier on.

Not another one! The jury is out on Danny already!

Not sure about the newly promoted teams, wouldn’t one of them be interested in bolstering their attack on a budget? Sanogo would be an asset if he can prove his fitness to Bournemouth?

The season after next the TV deal will bring upwards of £100m to each club. Would you gamble that kind of money and have Sanogo as your striker if you were a newly promoted team?

The option being would you gamble £100m on Sanogo and guarantee him the regular first team he needs?

Despite the number out, not a single player out on loan has made himself indispensable, or made such strides that we’d be mad not reintegrate them. Our direct competition (at home and in Europe) gets wealthier, and the standard we need to operate at increases each year. Coquelin and Bellerin made incredible strides and we have to make room for players to grow… but I think Sanogo, Campbell, Podolski all missed the boat. We should have a clean break with all of them and focus on getting this squad the help they need to keep winning before our best players… Read more »