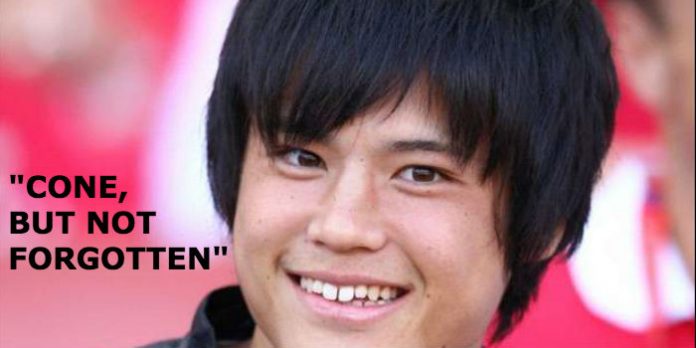 Ryo Miyaichi which ply his trade in the German second division next season after signing a permanent deal with St Pauli.

The Hamburg outfit – dubbed the world’s most left wing club – have snapped up the Japanese winger on a free deal after his Arsenal contract came to an end.

Miyaichi signed for the Gunners four years ago but never came close to nailing down a first team place. After a promising loan spell at Feyernoord, embarked on because he couldn’t get a permit to work in the UK, he was sent to gain experience at Bolton and Wigan. Both spells were wrecked by injuries that continued to blight him on his return to London.

His time at Arsenal may not have been the happiest, but he’ll always have the memories of the pre-season tour of Japan in 2013 where he was treated like a rock star and scored a penalty against Nagoya Grampus.

And we’ll always have this…

Arsenal have also confirmed that defender Semi Ajayi has signed for Cardiff after impressing on loan with the club in the final weeks of the 2014/15 season.

Good luck to both lads.

Shame he didn’t out to be a Japanese Ronaldo
good luck to him!

All that money wasted buying him on FIFA Ultimate team.

Wishing Ryo all the best in the Bundesliga. Hopefully he can meet up with fellow Japanese players from other teams as a fair number of them ply their trade there.

I thought we had something special there… farewell Japanese Ronaldo

Cone but not forgotten?

Sorry, I’ll get my cone.

he came, he saw, he conequered?

“Read the small print in your cone-tract” – Alan Partridge

Don’t take me for some sort of cone

Me So Hornsey
Reply to  OOzil

Time has cone so quickly.

cone are the days of Ryo Miyaichi

He had good potential but injuries ruined his development. Maybe he will do an Afobe and work his way up

You mean he Cone do a Coq?

Think he’ll do really well at St Pauli, good luck to him.

I’m sure he will, and they him. They’re a nice lot, ageing lefties and laid-back punks with little dogs on pieces of string for leads. Brilliant club in an OK big city where hopefully he’ll be able to find Japanese food. So glad he’s gone to a good home.

I think he’s cone-a do fine in Germany

Was always one of my fav academy prospects. I still think he has a bag of potential to be unearthed.

He really did have a great attitude, it’s what endeared him to the Feyonoord fans. On his first game after having like 2 assists, he didn’t leave the ground till he want to every corner of the pitch to bow the fans for supporting him in the match.

At first glance I thought the club was Paris St Germain and I was very confused. Good luck Ryo!

Zorro in the Box

Anyone else think St Pauli sounds like a gangster from the Sopranos or the Godfather?

Oh Ryodinho, it was never meant to be and now it’s cone to a close. Good luck.

I don’t know who this player is.

Have I been coned?

God I hate St Pauli! Hope he manages to escape from there.

Which South Asian star do we get now? Honda? Maybe a Chinese star

I went to South Asia once, couldn’t work out where Japan was. All my mates said it was in North Asia but I think they were pulling my leg. The next year I went to South America, couldn’t find Canada, I no longer had mates by that point.

I’m more disappointed to see Semi leaving. There’ll be no opportunities about our Coq getting a Semi to play with etc, etc…

Sure but aren’t you happier if Wenger to gets Coq out rather than his Semi?

U wot mate?
Get outta here.

Lets get real here guys. He is toilet compared with the players in front of him…..
Opening up a foreign market is all well and good obviously, but the player has to be good enough. He isn’t.

His toiletness is highlighted by the club he’s going to. Regardless of my personal dislike of them, FC St Pauli was never a club for those who are doing well. They survive by their rag tag following and cult reputation alone.

He would have stayed if we signed Conedogbia.

*cries* I know Giroud is everyone’s HFB but Ryo was my HJB.

And now he’ll be St Pauli’s Stattlich Japanischer Junge. Or something to that effect. It all pans out in the end.

I had high hopes after his Feyernoord loan. Best of luck to him.
The one and conely

He coned have made it with us if not for his I’ll fated injuries. I wish him a Conequelin(ish) transformation.