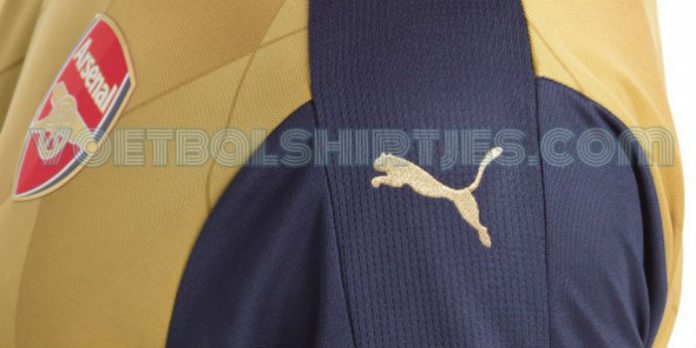 On Monday night we saw the official launch of Arsenal’s new Puma home kit. Having ticked that off the list all eyes turn to the away kit.

In Mat we won the FA Cup in yellow…this August it looks as though we’ll be chanelling the golden era of 2001-2003.

Well that’s according to the latest leaks from Dutch site voetbalshirtjes.com. It features the same art deco ‘A’ neck motif as the home shirt, a jacquard pattern on the gold body and navy blue sleeves.

Take a look. We think it looks pretty snazzy…

Not convinced by this kit but If it helps us to play like we did THAT season I can’t complain…..WILTOOOOOOOR’……

Can’t wait to see how sexy Mesut looks in it

I will go with the assumption that you are a dude, but I do agree.

Is it be an issue for you if he is a dude?

Not at all, it was just an observation.

Hopefully this season we’ll seal the league away in Manchester again, but at Middle Eastlands… It’ll be good to see history repeating itself!

Le coq would look awesome in this. Like a golden coq

That’s horrible. This one was doing the rounds yesterday – it looks a billion times nicer https://pbs.twimg.com/media/CHttVXJVAAAadsv.jpg:large

They look pretty much the same, no?

Loved it. Puma hasn’t let me down yet, good combinations of modern designs and class.

That would look a lot better without the diamond pattern

Sorry to go off topic, but I’ve just seen Germany is playing tonight in the u21 Euros against Serbia, and there’s a chance Gnabry could feature, although even in the u21s he has some stiff competition from Kevin Volland, the captain.

The home one is just stunning. Now this one humm will have to see.

Oh my god, gold Sega is one of my faves! Not 100% on the diamonds but it straight away reminded me of that crazy old yellow and black jvc kit with the arrows

I dont know why but i think it will look good on Walcott.

Dont judge it till you see it worn by Walcott.

I really like this. Feel like I’m in the minority, but I hate the new home kit.

me too. Would have been much better if only the sleeves were white.

I love it because it is my favourite colour. In fact, I might fill my swimming pool away shirts and dive in.

We were undefeated in that gold kit as well

The Golden Kit looks pretty cool. We are gunning for the next season. Watch this space, I said it first.

*the Treble I mean.

Looks great, but I wish the diamonds were only on the front, and the back was solid.
It will look a bit busy with the names and numbers on back.

I really like this design, why didn’t they do the home kit in this design in red and white??

Jesus, this is absolutely terrible

I have a Pumas UNAM shirt from a year or so back in the same colourway and it looks brilliant.

I think the fake one looked much better.

Concordia
Reply to  Force Of Five

I loved the fake one, I think it’s the gold, and white shorts, that makes it look so flashy. But this one is not that bad at all, but I think I’m going with the home shirt next season !

Arsepedant
Reply to  Force Of Five

I really like that, with the cannon across the front.

Rossi88
Reply to  Force Of Five

Dear Puma,
Above is a link to what we Arsenal Football Club fans believe to be hoax kit design. We all are in agreement(quiet you!) That kit is the dogs bollocks and Jackie Wilshere looks wicked in it. I too, hope to look ‘wicked’! Please revise the real design…..basically throw it away and steal the design that stole your company Emblem and integrity. Thank you very much.
Yours faithfully,
Gooners
…that should do it.

Is it gold and blue or white and brown?

I dont’ love this one at first glance, I prefer this past year’s to this, but I am sure it will grow on me as they always do. The red one is pretty sharp though.

Although both shirts are nice, why must we have a new shirt every season?

Surely it’s fair that a shirt lasts for two seasons, come on Arsenal, you are better than this.

It’s probably why the kit deal is worth more money than the previous one with Nike.

Neither a fan of ‘grandad’ collars nor diamond jacquards in this season’s offerings, but that’s just me.

Pardon me, but i’m love with this kit.

Third kit is going to black :-/ I do like this though

I’m personally all for this kit. We won the league at Old Trafford wearing gold and the league fixtures look like they’re teeing us up to do the same at the Etihad in our penultimate game next season. I’ll take that.

I like how not tight it looks at the gentleman. Means I can drink a lot more on game day without having to try and suck it in!

the gold is great, but the design is awful.

I’m sorry I sound like the designer that I am, but why don’t home and away kits have some semblance to each other. I mean SOME semblance. Same trim ratio. Same colour consistency. Something. It bothers me. But anyway. There’s stuff that’s sexy about both and then there’s stuff that’s just… meh. The gradients in the yellow, especially.

And the more the third kit REMAINS a leak and not the actual one the better.

Ooooohhhhhh ark at him. Pretentious moir.

Its fucking wank! why change a good away kit to this extent.

Are those diamondy body shapes watermarked or part of the design? Don’t rate em at all dunno why

Believe they are the design. I also believe I’m a twat for not realising, carry on gents

It’s not great.
Dont know why we have to fool around with the colours.
Stick to tradition with a modern touch.

Sorry to be that guy, but “in Mat we won the FA Cup in yellow”?

I think you might have a typo in there. – Sorry for pointing it out, I cant help it, its bothering me

Comments about how the shirts look range from aging tubby dads to yung blud so not sure how to gauge a good reaction on them every year, but for me – this could be the first time I ever buy an away kit. Yellow is kinda horrible on me, I mean it’s not far off a fluorescent workman’s/policeman’s jacket but this gold shit is kind regal. Like the blue too, nice darker shade.

Not a fan of the jacquard pattern on this one and the home kit has that white on the lower back part ew.

Never bought an away kit before. Might start now.

would be the Second Away Jersey am getting definitely worth it. the home jersey looks like your panties are showing after the red of the shirt . A LEAGUE AND CHAMPIONS LEAGUE DOUBLE WOULD BE APPRECIATED IN THIS Thanks.

I hate it. And so does my wife, and she’s always right.

She wore a golden ribbon in the merry month of May

Don’t like either of them.. i will most likely purchase the home kit…. just because i get at least 1 or 2 of the kits every season. But anyways maybe this will be the first year i say NO THANKS, and wear last years shiat… i do NOT like this diamond pattern, and the home kit.. i dunno just not feeling it AT ALL.