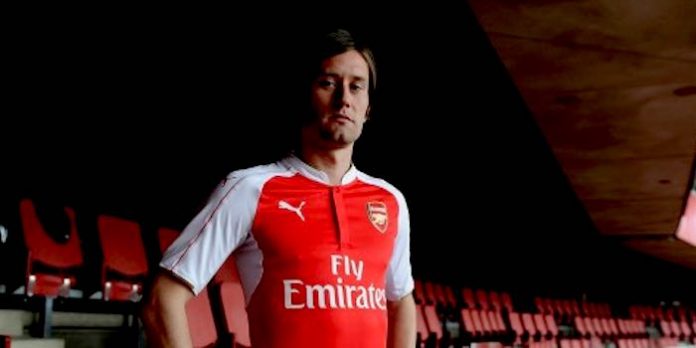 Tomas Rosicky has again admitted his disappointment at the lack of playing time, but says he’s ready to fight for a place in the team and to help Arsenal win the Premier League next season.

The Czech international sounded particularly vexed last week when speaking in his native country, but at last night’s launch for the new kit he sounded a lot more positive about his situation despite his unhappiness.

“My focus is here,” he said. “I have another year left on my contract. It was a difficult time for me. It’s never easy when you are not playing at all and you end the season in the stands.

“Is there a frustration? Of course there is a frustration because I think I can still help the team to be better.

“On the other side I have been here nine years and I have always said I love the club. I don’t think I have to prove to anyone how I feel about Arsenal and how loyal I am to this club.

“Of course it’s not going well for me at the moment. It’s disappointing but I will not give up easy. I will fight.”

And he says the team must carry the momentum of the FA Cup win and general good form into next season.

“Every player realises we have to carry on that momentum,” he said.

“Consistency is key for any title challenge and that is what we have to show through the whole of next season. The potential is there for this side to challenge for the title.”

Once again it’s the theme of every recent interview, the players want to do better – Nacho Monreal mentions it in this extensive piece here – so let’s hope the club back them and do what’s required to make a real title challenge possible.

remember the invincibles
Reply to  Tittiescamara

Fight. Happy to be hearing that word a lot. Gives a lot of confidence for next season.

And not to second guess anything, but I feel he could/should play a bit more often whether it’s off the bench or starting due to rotation. Invariably adds some kind of spark and zip to proceedings.

Either way, hope he can continue to stay fit and enjoy the rest of his career.

Feel like he’s a good player to have when we’re protecting leads. Not just does he add workrate, his energy going forward ensures that we never get pinned too far back and are rendered completely impotent on the counter.

The best attitude of amy arsenal player in a long time.

Why he isnt played more does bother me rather alot.

He still show how he loved the club even he admitted his disappointment. You just can never hate super Tom.

We were ‘lucky’ that we ended the season with our best midfielders all being healthy and in form. But it’s good to know that we have TR7 waiting when that won’t be the case.

There are plenty of PL clubs (and big European ones) where Tomas would be their star player.

I just really hope whatever happens, we treat him with the uppermost respect and allow him to do things on his terms. I was slightly concerned that the contract extension was out of his hands. He’s been such a loyal servant to the club and deserves far more football than he gets. If he says in January he needs to move on, we shouldn’t stand in his way.

Love Mozart, not that I’m that way inclined hehe. Does not look happy in that pic, could it be the new shirt? on the kit front, that button up middle bit makes it look ugly and chavvy, just my opinion.

There are some games in our season where the passing sometimes lacks the zip and pace. Recent games against Sunderland and Swansea come to mind, in such games rosicky is absolutely essential as he lifts the tempo of the play whenever he is on the pitch and should definitely be used more often.

This man is such an inspiring figure within the team, and he brings such positivity to the club as a whole.

I think it’s about time I wore a new Arsenal shirt with ‘Rosicky 7’ on the back.

Love him to bits but who would you take out of our first team to slot him in?

Yes okay who would you rotate for him

Wenger really should write an extremely long autobiography. Or maybe an audio book in that brilliant voice of his when he’s done with the Arse. I would buy it just to know what his thinking is when making decisions like this.

Difficult to regularly play Rosicky when Ozil, Ramsey, Cazorla, Wilshere and Arteta are all in firm and fit to play in front of Coquelin and behind the likes of Sanchez, Walcott, Welbeck and the Ox. But he gives us great change of tempo off the bench especially against park-the-bus teams at home. He could have and should have played a little bit more last season I think.

That change of tempo you’re talking about was required in so many games last year and I didn’t understand why he wasn’t playing. I am very surprised because if I was to guess what Wenger would do with Rosicky knowing the style that Wenger likes to play and advocates, I would have thought he would stick to Rosicky in most games.

Unfortunately with how little he appeared this year when healthy and with all the injuries we had in the midfield there is little chance of him getting more playing time this upcoming year. No matter what he does in training and when given chances Wenger has never stuck with him for more than a few matches while others in poor form often have continued to start.

I was frustrated during the initial part of the season when we were not using TR7 as often and we used to end up drawing with smaller teams, but I understand that Wenger was trying to stick to the plan and the formations… I think that there is a place for him and the Ox to instill a bit of zip into proceedings. More of Tomas would be nice … love the way he drives through the lines

The players are all aware that we need just a few world class signings to be able to challenge for the league.
I’m not convinced Arsene agrees though. This summer will tell us.
Rosicky is exactly the calibre and character that we need to play the odd game and come off the bench (before the 70th min would be nice..). I love him and hope he gets a testimonial at the end of the season.