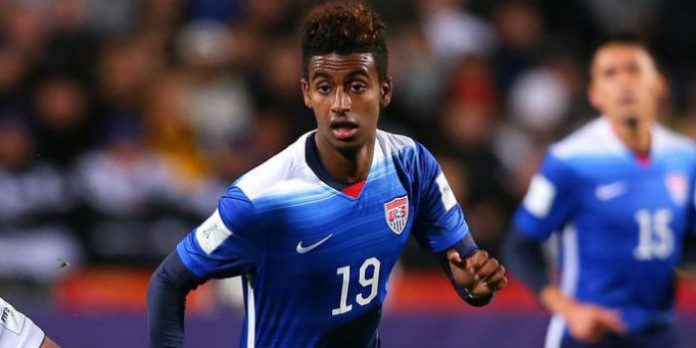 Fresh from being granted U.S. citizenship the midfielder has spent the last two weeks representing his adopted country at the under-20 World Cup in New Zealand where his performances caught the eye.

Ultimately the USA went out on penalties to Serbia at the quarter-final but the competition has left Zelalem in high spirits. “It’s a great tournament,” he told FIFA.com of the under-20 finals.

“You look at the likes of [Lionel] Messi playing in it back in 2005 and you know the history it has. He won it though and I wanted to do the same!

“Being here with the boys has been great and it’s definitely given me a taste for playing in these kind of events. I think there’s a few guys in this squad, myself included, who could be in the senior squad for the next World Cup and that has to be our aim.”

Of his aims for the forthcoming Premier League season he continued: “I’m going to go back for pre-season and try to get into the first team and play some games.

“If I can do that, great. If not, I’ll look to get out on loan somewhere. It’s a dream come true to be at a club like Arsenal and I want to get into the first team this season, play minutes and start matches.

“I have high expectations of myself and if I was to be starting week in, week out, I wouldn’t be surprised.”

Given the midfield options at Arsene Wenger’s disposal it’s going to take something special for Zelalem to feature regularly in the coming six months. A run in the League Cup could help his cause before a loan in the second half of the season. It’s a path trodden by many a youth prospect…

Best of luck to him – I hope he never loses that determination.

Twenty years later we’ll be hearing, “I have high expectations for myself. I want to be a starting fossil like Ryan Giggs for Manure.”

“I hope he never loses that determination.” He needs to show a bit more of it on the pitch.
If he shows well in the TinPot Cup then I’m sure he’ll get some senior bench/game-time but it’s a big step up from U20 to senior in the PL.

I have high hopes for the lad. With a good showing in the Emirates Cup, Pre-Season friendlies and League Cup, we may be able to pass judgment on him.

I like what I’ve seen of him but with internationals such as Jack not finding game time, it could be 2-3 years before he establishes himself fully.

an my pricks a bloater.

I beg your pardon?

Can’t help reading your comment in the arsenal gent’s voice.

‘If I was to be starting week in, week out, I wouldn’t be surprised.’ shows confidence/arrogance, though he will have to make a Bellerin-size step up to make it, given who is there now to compete against.

Hope he can, though a loan is far more likely.

Yup. And to be fair Debuchy was injured, Jenks on loan and Chambers looked a bit shell shocked after a great start. Wenger had to roll the dice on Bellerin and it worked beautifully.

With Ramsey, Santi, Jack, Rozza, Arteta, Ozil, Ox all able to play in similar positions to Zelalem, it would take something massive for him to get the game time. I think a good league cup run and loan is about the best he can realistically hope for. Good that he’s a confident lad though!

Hm, good luck getting time ahead of Cazorla, Ramsey, Wilshere, Oxlade-Chamberlain, Maitland-Niles and Crowley. From what I’ve seen on YouTube (I know, I know), he has some way to go technically, nevermind physically, before he’s ready for the first team.

Maitland-Niles is going to Ipswich on loan next season and Zelalem is probably (definitely) ahead of Crowley in the pecking order but I agree with your comment IRO the others.

His vision, the weight of his passes, his dribbling… They are all absolutely unreal.

I have very high hopes for this kid. He is a special talent.

Sometimes he seems indecisive on the ball, but imo that’s better than rushing everything, he already has composure. He just needs to hit the gym and bulk up a bit before he can really be considered a first-teamer.

It would help if we could actually play in more than one League Cup game this year, to help get some youngsters some real minutes.

Ha it would, Paradoxically playing more youngsters in league cup games will mean playing a weaker team in the league cup and a bigger chance of being knocked out.

From what I hear he wasn’t exactly stellar for the youth/reserves last season. No questioning his talent but it sounds as though he isn’t quite ready for the first team yet, and a loan move to toughen him up a bit/get him accustomed to actual competitive football would be the best thing.

Wenger’s nose hair is absolutely right on this one. Yes he’s a talent but needs to work hard on his physic and decision making. Have seen the boy play few times. He just receive the ball turn few times and release a killer pass. Now that’s a good but in th premier league you need more than that. The ability to take on a direct opponent and to win before releasing the killer pass is paramount. I have never seen him dribbling pass a direct opponent and tends to avoid contacts by turning and back passing. Walcot, the Ox, Ramsey… Read more »

The Orcs?! Say three hail marys and wash your mouth out with soap.

The lad has talent and hope he makes it, can’t help but feel all the traveling he’ll be doing for the USA won’t do him much good with getting into the Arsenal team (although I hope I’m wrong on that front).

Had a pretty average season for the academy, but it must be fairly said he was used in a deeper position. Usually fans just see it as “he’s not good” but the truth is to become a well rounded player, you must be willing to expose your failures and work on them, knowing people will just presume you’ve stalled.

He’s played deeper to improve his defensive ability, but he’s a CAM at heart. It is good for him in the long term.

You could argue that he was one of the best players on a USA team that made it to the quarters so that is a positive development.

He’ll have to turn up the physical side of his game if he hopes to feature for the first team.

Yes he needs to work on his strength but some of his passing and vision is fantastic.

To the tune of BN BN (the biscuits)

In a couple of years Gideon will be unstoppable!

I have high hopes for Gedion, even wondering in certain moments whether he can be another Ozil in the making. He certainly has that gliding, almost casual, artful style about him, and he already knows how to pick a pass and lay on a ball. That said, I don’t think he’s going to be a major contributor for the first team before 2-3 years. He’s wiry and plays too “light” for the PL right now. Even Ozil himself struggled with that for the first 1+ years of his time with us. His frame, though, can hold more and I’m sure… Read more »

A loan spell this year and possibly next year would be the best for him, maybe even to a championship side as he needs to play. Still needs to fill out physically and get stronger, but definitely a talent for the future. You wonder though if he will ever make it to the first team with Arsenal as so many on the squad now that are young were already getting good game time when they were 18 or so.

I’m sure you will be of the first line-ups. Keep working hard. You are the representative and the pride of our mother country, Ethiopia.
Please Gedi, remind boss Wenger about his future project plans in Ethiopia. There is a great potential of having world class Stars, if anyone give us the opportunity. I’m also one of future hoped man. In Ethiopia, there is over 20 million funs of Arsenal. So, tell Our boss to speed up his pace on journey to Ethiopia.