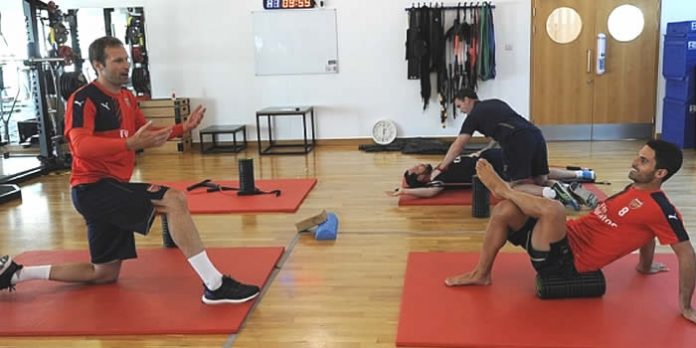 Mikel Arteta says that the signing of Petr Cech will instill the kind of belief in the side that’s required for winning the league, and that the capture of the former Chelsea man shows the ambition the club has to succeed these days.

Spending £11m on a 33 year old is not Arsene Wenger, or Arsenal’s, regular modus operandi, and the Spaniard – who explained why he delayed the signing of his new deal until he was sure he could make the right contribution to the team – believes it’s further evidence of the way the club has changed since he arrived in 2011 from Everton.

“Suddenly the club’s perspective and potential changed,” he said.

“Instead of selling the best players, they decided to keep the players and keep adding the quality every year Once we do that we start to show more consistency, start to win trophies , confidence, atmosphere, everything gets better.”

And on the arrival of Cech, he hailed the decision to switch from west to North London as one that shows how much the Czech international wants to win things.

“The decision he made to come here after being a legend at Chelsea was not easy. He is still hungry and he wants to prove himself at the top again and it’s a really good decision for us,” he continued.

“He could have gone to another league and said: ‘My name is here forever in the Premier League with Chelsea.’ And you know that there will be some criticism coming. He just wants to take this chance and say: ‘I’ve got another chapter with a massive club and I want to make Arsenal champions.’

“His ambition is still there even though he has won everything in England and in Europe. Those type of signings give a lift to the whole team. He’s not just a good goalkeeper. He has experience and ambition.

“He’s not here just to sit on his back. He wants to compete, he wants to keep winning and he’s a good lad.”

Arteta: We have to put the ball in the net

Given their ambition, experience, leadership and work ethic, not to mention their ability, these two will be crucial to our success next season. Really glad Arteta is staying on.

The Cech signing is a great move but that, in my honest opinion, does not make us that much stronger than last season. Our back five’s return was good enough to win the title. The more significant one, for me, is starting the season with Coquelin. This guy is not hitting the headlines just because he was not a big-money transfer from somewhere.
Another good forward signing is needed to make us more lethal up front.

We have not had the kind of depth in the GK department in the Wenger era – 3 keepers including a record fee for one but ability wise all quite closely matched.

In terms of ambition, a DM signing would strengthen that ambition. I’m actually not sure about a signing in the forward area as I think Wenger wants to use Walcott in that area and there is Welbeck as well, to find playing time for.

Same argument can be applied for the keepers too no? Szcesz and Ospina are good enough in my mind but Petr Cech? That’s another level. I have to disagree but if Wenger can pull off another marquee signing in the Strikers department I’m all up for it. Girouds great, but having Giroud AND Benzema or Muller for example, I’d prefer the latter. We’ve seen Giroud have off days, as is the case with most other strikers. More competition can only be healthy.

Never Müller. We need to see what The can bring as we need a speedy guy to change our options. I would be happy with what we have at the moment.

I don’t think they are matched ability wise. It is not even close. Cech is number one by miles, followed by the dependable and calm OSP. The combustive flop that is szcz comes last. He should be sold.

Cech mate…… money well spent…… am not looking forward into the transfer window with all eagerness unlike previous years…… if we sign I no it will be worth while which am sure we will do and if wenger decide otherwise am happy with wat we have. I can see a world class being announced soon….. he is a striker…. you hear it here first.

I can only hope that Wenger add quality in any department of the team, but for me our current squad are capable of doing something.

Koscielny and Mertesacker have a lot of mileage in their knees. I sense this is the season Gabriel start to usurp one of them as the regular CB.

We’ve got a hugely experienced goalkeeper untop of a settled defence, something title winning teams must have. We’ve got a team of quality players already which can challenge for the title now, we need the very superb additions now which won’t be easy to get (more like the Ozil signing). I don’t think anyone should be worried at what other teams are doing, keep calm and watch what Wenger is planning.

Signings are important. Particularly something to spark the team like Alexis last season. Cech can have a similar steadying impact. That said, signings are NOT the only way to improve on the team. Last season we saw marked improvements in Hector Bellerin, Francis Coquelin that NOBODY would have predicted. The prescription as per usual was to bring Jenkinson back and buy a DM. We also saw improvements with Monreal when shifted back to his more familiar role and the Ox. There is no reason to believe some of the younger and fringe players may not step up this season either.… Read more »