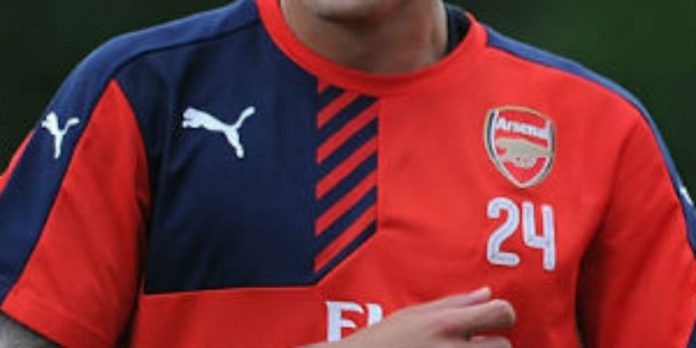 Arsenal have confirmed that Hector Bellerin will wear 24 on his shirt next season after inheriting the squad number from the recently departed Abou Diaby.

The Spanish right-back made 28 appearances wearing the 39 shirt during last season’s breakthrough campaign and appears to have been rewarded for his efforts with the chance to downsize his digits.

The player dropped a hint on his Instagram page about the change this afternoon before the club’s official website changed his number on their squad list.

It looks as though Isaac Hayden is now 42 (previously 45) and Chuba Akpom is 32 (previously 38). Petr Cech’s squad number is yet to be confirmed.

If you think that’s exciting how did you cope with the Hull 13/14 cup final? You must have had a triple orifice prolapse.

I think I may have just found a name for my band.

I was there at Wembley. Good phrase to describe the match, if it refers to pain not excitement.

Third Plebeian
Reply to  Chris B

I checked the internet…and it’s true!

I’ll only believe it when I see it on Arsenal.com

CB
Reply to  Chris B

If you like patterns we can predict his next number:

You saw it here first.

He’ll be struggling to get in the team by then as we will be so good. So will have to give up the 11 shirt or be sold. Or something…

Benzema for number 9! That would be the final piece.

Why has this been downvoted? Do people not like Benzema, do they think he wouldn’t be the final piece (i.e. we need more than that), or do they not want him to have the now vacant number 9? It’s not a shirt number with a glowing recent history at Arsenal, I grant you.

Are you suggesting that Stewart Robson is the rapist?

Other than that, I agree, people should voice their specific thoughts, rather than just the big red thumb. Discussions are more fun than thumb wars. And I am not referring to the type of thumb war from the school playground. Those were ace.

Hopefully he’ll get it down another bit before the season starts.

On a serious note when is it safe to get a number on your back safe in the knowledge that it won’t change?

If you’re over 18 I’d say it’s never safe to get a players name on your Jersey.

I’d give him 00, the number of goals he’s going to let in this season.

Fuck the shirt number, what sort of hat is he going to wear? Will it have Arsenal branding? Will it have his number on it? Will it say “Cech out my sweet headgear” with a Puma? Will it have beer cans attached to it with straws down to his mouth?

I don’t know about anyone else but the excitement of pre-season is really kicking in for me.

Would be a laugh if Ospina gets number 1 and then gets sold.

Shez might keep it. Almunia kept the number one shirt until he left the club – by which time he was fourth choice

He was still a viable choice by that time?

Is there any truth that Barcelona have buy back option on Bellerin? For a young player thrown in the deep end he really impressed most fans

Why bother with by back clauses when you can insert Catalonian DNA.

Anyone who mention the catalonian DNA or Barcelona DNA or any such heresy should be publicly flogged and made to repeat ‘there is no DNA, Arsenal are the best club in the world’ 500 times

Why do they need such clauses when they can just tap-up any player they want. Hell they even got Reina in on the act with Fabregas, that is how far their cuntishness spreads.

Crap. I just bought the Bellerin 39 when the new kit came out.

Frame it and hang on to it, if he has a glorius career then perhaps his old retro 39 shirt will be worth something in a couple decades time.

He is that good im sure it wont be long before he becomes yet another wenger winger experiment. Im joking ffs.

I don’t think there’s a photo of Bellerin where he isn’t posing perfectly. Great hair, looks like a fashion model, shit tattoos. Ah well. Ramsey must be his idol.

I like Ramsey’s tattoos! (But then again, he’s pretty much my idol now too.)

Can’t stand tattoos. They look like skin diseases. It’s like putting a bumper sticker on a Rolls Royce.

Has anyone bought anyone yet?

There has been some comic value: Chelsea signing Falcao.

6 millions tweeter followers! Is that all? Thought we were more than that. Still great at third though

It is all going really well for him. His arc is definitely on an upward trajectory.

I bet he is good at counting triangles.

Hi blogs is it ok to send in questions for arsecast extra by email? I’m not on Facebook or Twitter but my thirst for Monday evening enlightenment remains unfulfilled.

Looks strange… i prefer the 39. Surely will be wearing the number 2 in the near future anyways. Wonder if coquelin will get a better squad number. Will be interesting to see if alexis opts for the number 9 like he was at barca.

Now that #9 is vacant, do you reckon Alexis will take it?

No, I reckon he’ll get the number 7 when Super Tom goes.

Am so happy for bellerin. I just hope he does not inherit diaby’s injury curse

maybe should of retired the number along with diaby’s injuries! aside from the name or number on the back playing for the badge on the front out ways either

Actually, Hayden was #42 all last season too. #45 was (and currently still is) Alex Iwobi’s shirt number.

#32 has been vacant for quite a while. It was Theo Walcott’s when he first joined the club, and for his first 3 seasons until 2008 when he inherited the great #14 from TH14; since then, I believe only Fran Merida (for 1 season 2009/10 before he departed) has had squad number 32.

Another point of interest: If you check the images from Arsenal’s pre-season training, you’ll see that Akpom appears to be wearing #31, not #32, though he is listed as #32 on the Arsenal website.

#31 was Ryo Miyaichi’s squad number for the last 4 seasons.

If the lower numbers are better, Sanchez’ number should be negative.