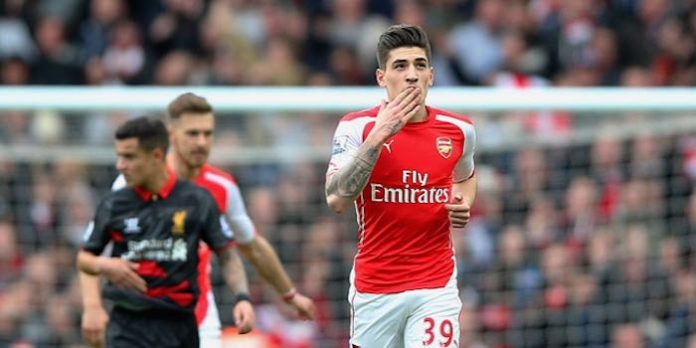 Arsenal have confirmed that Hector Bellerin has signed a new long-term contract with the club.

The exciting Spaniard signed a deal back in 2013, but having made the breakthrough to the first team last season, Arsene Wenger has moved to secure the future of the 20 year who joined from Barcelona at the age of 16.

He had a spell on loan at Watford in the 2013/14 season, and was going to go on loan last season until the opportunity presented itself. He ended up making 28 appearances, including the FA Cup final.

He also scored twice in the Premier League with both strikes coming at home; his first in the 5-0 win over Aston Villa, and the second a superb effort in the 4-1 destruction of Liverpool in April.

So, good news, and let’s hope he can continue his progress next season.

I really don’t want to poo on the party, but 1 poo. It was 4-1. Viva Hector, because he is simply exciting.

Hope Walcott can put his tiara away and sign on the damn dotted line.

Glad. Him and Jenko will provide fantastic competition for each other for a good 10 years. (This is me hoping that Jenko will be with the club after this season).

Love this guy. Keep doing what you do best Hector!

Wish he had Hector at the back of his shirt. Top name, top player

Hector is what i’ll name my first son, the name is that awesome!

Barca DNA has this weird aspect to it where it only becomes active after you become a world superstar. Then suddenly this Barca DNA you had all along but never knew about starts sending out receptors to your brain and you end up a few years later blacked out in a ditch with a Chelsea shirt on your back and Jose Mourinho’s number in your pocket and no memory of it.

Happy for him and us

Doesn’t all of this good news just make you a smile? Granted I’m rather young, and from the states, but in the time I’ve been REALLY following the Arsenal the last two years have been absolutely fantastic (compared to the previous 5). Improved league position, improved performances, buying big names, implenting new coaches and methods, keeping players on long term contracts and not putting ourselves in difficult transfer situations. I feel like this has been a stressful period but the fruits of the clubs labor are really starting to pay off, and it’s all good news after good news. My… Read more »

We truly have turned a corner as a club; in summers past, we’d all be dreading the news of departures of the best players at the end of a season. Now instead we look to bolster with star quality while securing the best performers with longer contracts. Even those about to leave sign new deals before going on loans etc. Don’t know about you guys but I’m loving the new Arsenal or should I say, the return of the old Arsenal! Now to smash the chavs and bring home the premiership trophy!

Good, now we still have an interpreter for Alexis.

Why? Is the Spanish for; “Fuck me, that was incredible!” too much for the other lads to remember?

Great news, he’ll be our first choice for many years to come.
Speaking of long term contracts, I’m not usually interested in other club transfers but what’s up with this Delph business? I thought English players have a hyperinflated market rate and all that so how did City get a guy who just signed a new deal for just £8m? If there’s release clause involved, how come it’s so low?

Sign the dotted line prove to Wenger that you can stamp the number 9 role as your own no matter who comes in.

He may grow to be our best all-action fullback since cashley. He’s got real pace, flair, a good offensive sense from his days as a winger and is improving in his defending and positioning too. When Barca come sniffing, I hope he let’s the know where to go.

I think the best sign of our shift as a club is to compare the relative silence regarding Walcotts contract situation now to the cacophony that errupted but a few years ago.

Glad to have the Baller-in.

His goal against the smashers was as cracking as it was crucial. it was the first goal of the game and just reward for the solid play from us all half long.

Long may such performances continue!

Great news, he is fantastic.

What the hell is going on with Walcott? I have not heard anything about his contract. I am surprised this has not cropped up more in the press. He needs to sort it out.

any details on the contract blogs?