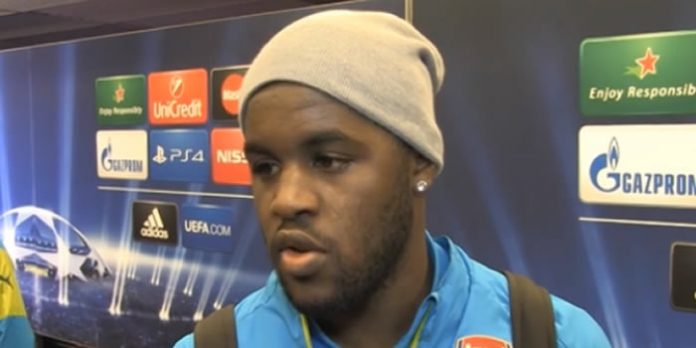 According to a report in Costa Rican newspaper La Nacion, Italian side Palermo are interested in taking Joel Campbell on loan for the season with an option to buy him next summer.

The 23-year-old striker is currently on holiday following his country’s Gold Cup campaign and is believed to be assessing his options with regular first team football under Arsene Wenger looking unlikely.

Campbell, who signed for Arsenal from homeland club Saprissa in 2011, has also been the subject of a rejected bid from Real Sociedad. David Moyes is understood to have tabled an offer that was dismissed out of hand by the Gunners board.

The attacker made 10 appearances in an Arsenal shirt last year before he was loaned to Villarreal in January. His move to Spain, which was preceded by the signing of a new contract at the Emirates, was the player’s fourth temporary move in the last four years after spells at Real Betis, French side Lorient and Greek giants Olympiakos.

La Nacion claim that Palermo’s sporting director, Manuel Gerolin, confirmed to them that president Maurizio Zamparini had already travelled to London to finalise a deal for Campbell. The Gunners are more keen to offload the player on a permanent basis, something the Italians are mulling over.

Get out while you still can Joel!

Head and over spring to mind!!!

I’d suggest it’s a light-hearted reference to this…

Indeed. Hopefully those scumbags have moved on to a new club as well.

All the best wherever you end up, Joel.

Good luck to him. I don’t think he is good enough to play for us much, so hope he finds somewhere he can play regularly.

At 23, he is no longer a prospect. He should be playing week in, week out and that certainly won’t be at Arsenal if his recent showing (in the gold cup) is anything to by. Any where would do for him.

With Podolski and RVP worth pocket change (by football standards), and Sterling worth close to 50m, I just have no idea how much Campbell might be worth? I’d love it if we could get 5-7m. Beyond financials, let’s remember that Dick Law spent a summer in Costa Rica trying to sign him when we all wished Arsenal were doing business elsewhere. This has definitely not worked out.

Hold on. Campbell swoop. I just got it.

Though am a big fan of Campbell, unfortunately, there seems no real opportunities for him given the talent we have in the wide positions at the moment.

Good move for him. He looks very fetching in the sugar-pink strip.

Playing Arteta and Carzola together is suicidal and I pray that never happens against the likes of chelsea. Flamini is average…wouldn’t make chelsea, city, liverpool or man u bench.

If Campbell gets sold, it may signal preparation that we will bring in another wide player.

Someone like Draxler could be very useful adding capability wide but also could be converted into the CF position for the future (at age 21). He has the height, quick feet and shooting power for a more central role and his age is perfect. Giroud is 30+, Welbeck 24, Jeff 17 so a 21 yr old will tie in over season after and work into position over next 3 seasons (Jeff will still only be 20), Giroud will be likely gone at 33.

Consider Fanbregas and Nasri both became more effective at this age. Also recently Cqouelin. Both Ramsey and Walcott were considered by many surplus to use until they hit 23yrs. Ox is also showing signs of maturity at this age.

So it isn’t a far stretch either to give Campbell one last role of the dice over next half a season ala Coquelin.

Cesc had been effective since 17, while Nasri had a good 4 month period.

23 is a very general number.
Some ‘make the step up’ before and some later.

Campbell wasn’t awful in the Gold Cup, but he wasn’t good enough either. He did have that amazing run zipping around 4 defenders with 1 Mexican defender tearing his shirt in the, like 111′, when he had to be exhausted:

I’m a big Campbell defender, but even I know he’s not going to make it at Arsenal. I’d keep him until the end of August though, just to make sure Welbz is back or close to healthy and Giroud doesn’t get another freak injury.

Joel needs the club to believe in him, he is better than Sanogo, he needs game with our unit even if only in cup games. I will not pit a play against another but at 23 it is on him to show he can thrive here but we must give him the minutes.

Hello fans arsenal, Campbell here in Palermo can ‘do well, here we have enhanced many young players. Campbell sell, contract expires in 2016.

I’ve said all along Campbell will be better than Welbeck, and one day I will be proved correct.

I think we have to still consider Gnabry. He very much featured in training but did not get a chance to play pre-season. The limited time that he featured before going out to recent injury, he looked robust and effective. IMO if he is back to full fitness and proviso he is committed, he is way advance of Akpom, Iwobi or Jeff for the wide berth remaining for a player from our ranks. If Campbell is moved on, that spot could be his. If not it’s a bit of a toss up. Plus it will impact any space to bring… Read more »