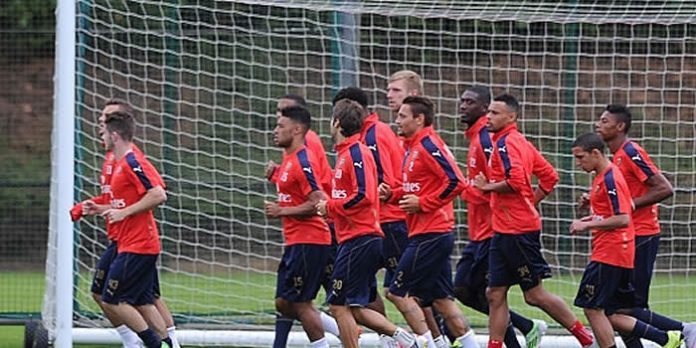 Arsenal have announced the squad for next week’s Barclays Asia Trophy.

It’s a pretty strong group, but with some notable absences. David Ospina and Alexis Sanchez are on holidays until July 27th and August 3rd respectively, due to their involvement in the Copa America in Chile.

Calum Chambers, who was away with the England U21s at the European Championships, has cut short his holidays to begin his physical preparation, while Danny Welbeck is still not 100% recovered from the knee problem that kept him out at the end of last season.

Tomas Rosicky suffered an injury for the Czech Republic against Iceland and also won’t make the trip, while Petr Cech is included in an Arsenal squad for the first time, along with Wojciech Szczesny and Damian Martinez.

Sorry to be pedantic, but it’s actually ‘ting’.

Ting as in Babylon. Or is that Babylan?

My brother is pregnant
Reply to  SB

Does anyone knows which flight they will be on out of London to Singapore?

A
Reply to  My brother is pregnant

As I understand, they’re flying on a chartered plane and will land at a private terminal in Singapore.

How can someone possible put tump down for someone that says he love Arsenal?

It was fatgooner, who is big enough that his downvotes count for 5 normal ones, and he thought the guy said “I love Arsene.”

Can’t wait to see them and welcome them in Singapore. #YaGnnersYa

We’ve got a squad that’s the most promising we’ve had for a long time. Back to back cups and tons of good feelings, fans that are really looking forward to the new season. Surely to God there are better ways to prepare than playing the orcs.

No Bielik is the main surprise/disappointment for me – is he injured? Like Welbeck being injured is a bummer but we know what he’s about, the main fun of preseason for me is seeing the young guys. Excited to see Reine-Adelaide play though because I’ve literally never seen anything the guy’s done.

You really must see his “Torment of a Young Footballer as an Artist” in the Louvre if you ever get the chance. It will really touch your soul to its very depths.

Whats with welbeck anyway?, anybody knows?

It now seems from this article that the “little knock” he sustained in the match against hull in april continues to sideline him.

hope this gets sorted before the start of the new season

Inflamed knees, he said. It’s something he had when he was younger which recently returned. Apparently it takes ages to heal but will do eventually – or so everyone’s hoping.

I’m really concerned that Biliek is not in the squad. I thought he was close to breaking into the first team.

No Gnabry, no Toral, no Sanogo, no Wellington. Gnabry went to the under-21s, so may still be on holiday, but I don’t think Toral went anywhere. I really rate him (terrific hat-trick for Brentford when he came on as a sub) but it looks like Wenger’s not keen. Sad, because before his bad injury a couple of years ago, he looked really good, quite as good if not better than Bellerin. I suppose it’ll be another loan spell for him. Hope he can get one in Spain, which will suit his style better and where he will probably end up.… Read more »

Gnabry is still on holiday until July 20. Sanago and Jenkinson were left out since they will be loaned out shortly. Campbell is playing for Costa Rica at the Gold Cup. And as for Wellington, who knows?

You have a beef with that ?

Yes, put your Dukes up!

Boots this thread into touch.

Would have been absolutely buzzing if I could go see the boys in Singapore seeing i m based in Malaysia!

Heading to Lille apparently? Must be something going on for him not to be included.

I don’t know why but I just feel there’s something about this Reine-Adelaide dude… Goodluck to the team an cheers to an injury free pre-season.

I think wenger could this sort of insight in his scouting network!

Yet another player for the Arsenal Gent, especially in the loan absence of Ainsley Maitland-Niles.

And Ormond-Otteweill (sp?). Gotta have a hyphenated name in every squad!

BO-O is now at Swindon (no Gentlemen there, but quite a few Gents….. and Toilets for other genders too!)

Akpom, Bielik, Gnabry, Wellington, Pleguezuelo, Sanogo – I was hoping to see them play

Chuba is in the squad!

Squad looks really good on the paper. Good to see the young gunners given an opportunity.

no Wellington, no bielik and no sanogo

I’d start these against Everton

Nice team, let’s hope Walcott signs on. If not though Ox is a better player for me except goalscoring, where Theo is obviously brilliant.

Just saw Ox on the left. So i guess never mind my comment, haha.

Surely you’ve been down voted for leaving out coquelin

It’s a killing squad, it’s gonna be hot over there, can’t just wait

Pretty much the whole group but…where IS Gnabry? Is the boy still not fit?

Extended holidays, was at European U21s

Well let’s hope the team gels today. Just like Bellerin had a good game in the Emirates cup I hope one of our youngsters does so too. Tipping Wilshere and Ramsey to score lovely goals!

Interesting squad – and the omissions of some really talented players show how strong our current set up is.
Gnabry is still off after the U-21s Euros and I guess we’re lining up loan moves and/or sales for Bielik, Hayden, Sanogo and Wellington.

Am already excited about the new season.Hope they stay injury free and a step up from Jack and Girioud can win us some trophys.

I will be attending the match with just my 3yr10months old son. Can’t wait for that day to arrive.

I’m traveling over there with a group of about half a dozen English and Chinese gooners. I’m guessing you and your 3 year old son won’t be out on the beers, but any advice for the rest of us?? Cheers!

Hi @Phil, this guide could be useful for Gooners heading to Singapore. Refer to #2

Take lots of money. Beer is expensive even in happy hour.
Boat Quay bars were good last time I was there.
And Orchard Towers was most entertaining……

We can win 3 trophies before the season even starts!

Tad light on strikers (compared with the rest of the pitch) ?

It seems we have forgot our fellow fan who represents us on the pitch. Where is Carl Jenkenson? #WengerOut

Please get Zelalem more playing time. Watching the U.S in the Gold Cup is so painful. Started calling United the “Stoke of Manchester” last season. Now im going to have to start calling my own country the “Stoke of the Americas” or some dumb shit…

At least your country got off to a better start than mine. 0-0 against El Salvador, for fucks sake! How do you shoot the ball twelve yards over the empty net from ten yards out, with the keeper on his arse behind you? If the goal was in row Z we might have won 5-0. No wonder Canada goes nowhere internationally, we really looked terrible last night.