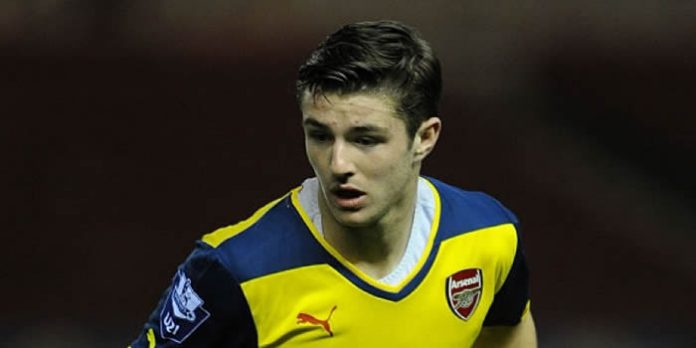 The Birmingham Mail are reporting that Birmingham City are interested in taking Dan Crowley on loan from Arsenal.

The 17 year old (he’ll 18 in August but until then remains 17) shone at under-age level last season, but Arsene Wenger may feel that regular football is the next step in the player’s development. Extremely highly rated at the club, the midfield playmaker joined Arsenal from Aston Villa two years ago, and has already caught the eye and regularly been brought into the first team training.

However, with the Gunners wealth of resources in that area of the pitch, the chances of him making any first team appearances – bar the Capital One Cup – are very slim indeed.

It remains to be seen if Wenger will sanction a season-long move or if, as in the case of other players, he waits until after the early rounds of the Capital One Cup to let his youngsters take up loan spells elsewhere.

Meanwhile, Arseblog News has been told that Watford and Aston Villa have shown interest in taking Chuba Akpom on loan.

The 19 year old signed a new contract last season and spent some time at Nottingham Forest, but with the Arsenal manager keen to see him in Premier League action, a move to a lower-table club is a possibility, although there is keen interest from the Championship too.

Get them on loan, should be good for all. Though Crowley may not fancy Birmingham if he grew up at Villa. Handy for his family though.

I can’t speak for Crowley, but I’d imagine that when your career is at stake you just have to suck it up and ignore tribal allegiances. Having said that, I did my undergraduate degree at the University of Birmingham, and I used to occasionally go to St Andrews with my housemates, on the basis that some football is better than none. Having seen them up close, the pondlife that supports that club would put me off going there, but hopefully young Daniel is braver than me…

Me So Hornsey
Reply to  Exiledgooner

He’s from Coventry so it shouldn’t be too big a deal for him. He’s superbly talented from what I’ve seen and although he is tiny, he’s still young and will almost certainly beef up soon.

Regarding Akpom, I’d be very interested to see how he fares for a prem league team it really is time for him to turn his reserve/youth team promise into 1st team reality.

Building a bigger stadium than ours, supposedly. Though it is an interesting shape https://twitter.com/Dunmoreorless/status/618756883545989120?lang=en-gb

At least it will help if we forget the answer to ‘What do we think of Tottenham?’

Worse than Stoke fans? The inbred six-fingered louts who are so dumb they have to drop their trousers to count to thirteen?

I agree about his physique. I’d also worry about whether he’d get any playing time anyway. Nine times out of ten our young players spend the season on the bench, with even the excellent Toral at the relatively forward-thinking Brentford rarely getting more than 20 minutes per game. Brentford play excellent football; Birmingham are the cloggiest of the cloggers, so even if they were forced to use him because the only alternative was the dinner lady, what kind of coaching and experience would he be getting? Thinking of all the players whose confidence was destroyed by dismal loan spells at… Read more »

Southampton never loan out players the way the big clubs do because they don’t have as much talent sitting on the bench blocking youngsters.

Thinking about it who would be in our CC team?

And you’re missing one of Ramsey, Wilshere and Cazorla, since only two of them can be part of the first 11.

I think that will be Debuchy not Bellerin. But same outcome.

We should loan our players only
to Charlton.

I think this could be akpoms year to shine,he’s been on the brink of getting first team football and I think he’ll suprise everyone and be this years coquellin and bellerin story,if benteke leaves villa then he might get a run of games there

I think Villa would be a perfect place for Chuba. Premiership football, and Villa are desperately short of strikers. Despite our slaughtering them by a combined score of 12-0 over three matches last year, Villa do actually try to play football and I believe Chuba would work wonders for them.

I feel Akpom can learn a lot at a Premier League club but more importantly under a great manager like Tim Sherwood because he has lots of passion and tactical knowledge.

But he needs to improve! Brentford: 4 appearances no goals;, Coventry: 6 appearances no goals; Forest: 7 appearances no goals. I like Akpom a lot. He clearly has huge potential, but it’s worrying that his finishing seems to have got worse rather than better in the last couple of years. Perhaps this confirms my point about loan spells not always helping. Remember Afobe, so brilliant at 15-16 he was scouted by Barca, reduced to a wreck who couldn’t hit a barn door by a succession of incompetent managers: last season he was the top scorer in English professional football, having… Read more »

Good point on Afobe, in part, I had great Arsenal hopes for him.

However it is more likely to be his age, Henry didn’t come into his own til 23/24, see his scoring record before that, 31 goals in 160 games. Something seems to happen around that age, that strikers develop physically and mentally and then shoot ahead, if they can. Afobe is 22 and has started scoring loads in lower leagues, so may well still star in the PL in a year or two.

Hope you’re right. First because Afobe is extremely nice and deserves to emerge as a star. Second, because it implies that early blossoming is not a good sign and Harry Kane is about to turn into James Beatie (whom he slightly resembles already).

It’s a tricky one, though, and you’d think, if this phenomenon were really so common, that Wenger would be taking it into account. Should we have kept Afobe rather than Sanogo? How long will we keep loaning out Akpom, especially if the loan spells go badly as up to now they have done?

Early blooming probably means you are exceptional. Or very lucky for a season and about to be Beattied.

I say keep Afobe and it would be strange if Wenger didn’t know about the phenomenon – he bought Welbeck without a sensational scoring record but at the right age. He has to hope that Sanogo does this too, he can’t be keeping him for his current scoring record. Chuba has another 3-4 years before he takes off, so patience is needed. If he gradually improves, the chances are he’ll be OK, he has the physical characteristics needed.