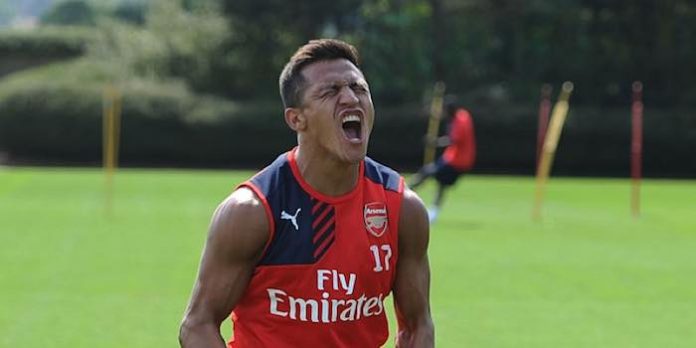 Arsene Wenger has backed ‘hyperactive’ Alexis Sanchez to do even better this season than he did in his stellar first campaign with the club.

The Chilean scored 24 goals following his £30m arrival from Barcelona, and despite being at the Copa America, has returned in what the manager calls ‘good shape’.

It’s likely he’ll be used from the start against Crystal Palace this weekend, and the Frenchman is hopeful his second most expensive signing can drive the team towards its targets this season.

“He came back reasonably fit,” he said. “He practised for two weeks before he came back. He did not start from zero. In training now, he looks alright.

“I knew before the start that, once he was here, he would be difficult to stop. So I gave him a long enough break. He had four weeks off, which is quite reasonable. He finished on July 3 and he came back on August 3!”

And with the new season in need of an injection of something after the defeat to West Ham, Alexis could be the man to provide it.

“He works extremely hard in every single training session to show that he is ready. I think what he does is, for me, normal.

“It is what everybody should do. You wonder if he has created a beach at home, and runs along the living room! He is a hyperactive guy.

“This season, he knows what is expected from him, and he will do better than last year.

“He is very ambitious, Alexis. He wants to win. He knows he won the FA Cup, he wants now to look to get more. And he is a winner.”

Alexis is the player I think wenger sees as his difference maker. Arsenal are a different proposition with him in the team. He is supremely talented, but his work rate and selflessness are even more impressive. He’s a proper superstar. Our superstar

exactly. much like Chelsea have Hazard, we have Alexis. the two of them are the difference makers for their respective clubs. imagine if Chelsea didn’t have a Hazard for an extended period of time. they’d be nowhere near as strong. i think the same can definitely be said about our club.

Except that Hazard is a puny little diving bitch. And he relies on penalties to increase his goal tally, and of course media hype for him to win awards. Even then he didn’t even score half as many as Alexis did. Alexis the better player for me any day. No argument.

Said it so many times, but I fucking love Alexis.

On another note, when was the last time Wenger spoke so affectionately about a player? He’s stolen all our hearts <3

I still on occasion have to pinch myself that the Arsenal have Alexis. Love the man.

How can you improve on perfection?

He would have to hit Mourinho with a rocket like in the cup final square in the face and/or balls.

Stopping losing half of your balls and shouting out of target 5 on 7 occasions.

i personally think alexis has the worst chant at arsenal.

Gunner71
Reply to  Tshaka the gooner

Um? How can you possibly down vote that statement?

Whilst winning us the title of course

Great to have him back. Will be interesting to see starting 11. For me, as much as I love Rambo, Carzorla has to take the deep centre spot back and the Ox would be my pick for the right.
Alexis, Ozil, Carzorla, Coq, and Ox.

Sounds like a good pub, The Coq and Ox

I really hope your right though my guess is if he moves Santi back in middle, he will play Ramsey on the right and bench the ox, it’s almost criminal. Santi built a good understanding with the coq but clearly wenger is not sold on it. He played Ramsey in community shield where we certainly didn’t take control in the middle and I felt the same thing happened last week. Coq started believing he was pirlo and Ramsey was terrible, going for Hollywood goals. I was frustrated last year when wenger kept playing a central player on the wing and… Read more »

I think benching chamberlain might not be such a bad idea. Ramsey on the right with Bellerin behind seemed to work quite well at the tail end of last season and Ox would give us something different off the bench if things aren’t going so well. Plus as good as Chamberlain was going forward in the last game he let the team down down for the second goal. As he did in the Monaco game when he scored then gave the ball away which led to them scoring on the counter. He needs to mature a bit and work on… Read more »

Good to hear he knows we won the FA Cup. I was concerned that got lost in translation

Hmm, me thinks that we may have our next candidate for a statue outside the emirates!

There certainly is room for improvement in any player no matter how great they are and of course Sanchez had a fantastic debut season in the PL, better than most could have expected. Some areas he can improve upon are going left and using his left foot (esp in the box where he too often does the outside of the foot cut and then right footed shot, certainly works at times, but also they are giving him tons of space to the left), releasing the ball more quickly at times and keeping our tempo fast, knowing when to play quickly… Read more »

I don’t see any set of skills in football by which Alexis Sanchez is not a better player than Eden Hazard (except of course in the hype department).
I’d be contented if Alexis maintains last season’s form while more players show the desire, hunger, talent and ability that he brings to the team. We’d be unstoppable.

Hype and diving. But neither are football skills.

Would love to hear Arsene’s thoughts on the differences and similarities to how Henry and Alexis trains.

It is what everybody should do.

I think we can still expect some slight rustiness from Alexis but he’s explosive and can make a goal out of little do he’s got to start now. Last week was so disappointing but I really expect the team to be sharp and deliver a win. Palace won’t be easy but if we are sharp and focused we’ll win

That’s him reacting to a missed chance..and that’s only in trainning. Beast!

It is okay to hate Chelsea FC, Hate Jose and as many of the individuals associated with the club as you want. However, it becomes petty when you attack their success on any level. If Chelsea wins the league nobody should care how they did it, our only concern as Arsenal fans should be how are we going to win it our way next year? I honestly don’t like Chelsea but you cannot and should not belittle their triumphs. That kind of talk isn’t becoming of where Arsenal as a club is trying to go. When you win you win… Read more »

Arsenal without Özil last season with Cazorla, Sanchez, Wilshere, Coquelin = 7th in the table. Giroud and Özil back, Arsenal back to the second place.

This Arsenal team, inspired by this human specimen – Alexis – is capable of winning the league without any new signing. The one major signing we need is the BELIEF.
The team, to the last man, need to believe they can do what Dortmund did in the Bundesliga 4 seasons ago; what Atletico did in the La Liga 2 seasons ago and what Monpellier did in Ligue Une 3 seasons ago – wrestle the title from more illustrous contenders by sheer determination and force of will.
Arsenal can join that league if only the players can believe. I believe!