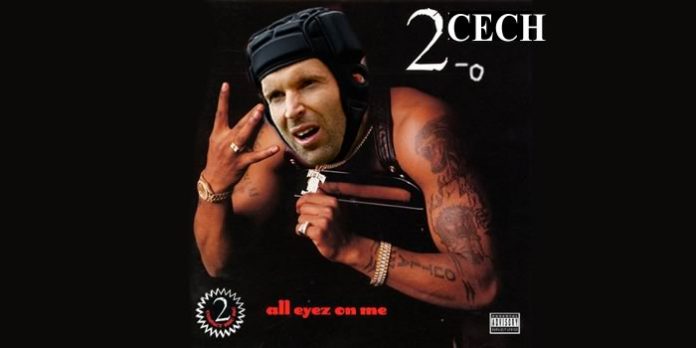 As is the custom at many clubs, new signings are expected to perform a song in front of their new teammates as a kind of initiation.

Freestyling off the top of his dome, he included players and the manager in his lyrical rhymes and that.

“It was the best initiation song I’ve ever seen at Arsenal,” Walcott told Complex.com.

“Petr basically went round each table and did a rap, involving each of the players sitting at the table – and he included the boss – it was amazing.

There was also this amusing coda to question about the biggest ‘bromance’ at the club.

Gibbs: Yeah, Calum and Alex are tight…but nothing beats Mesut and Mathieu. They do everything together, they do gym sessions together, sauna together, eat together…

Flamini is also friends with royalty, he must be a good chap to hang out with.

As a Wu Tang fan and gooner, hands down the best comment i’ll ever seen on this site

yo
Reply to  RIP Hleb

be the change...
Reply to  RIP Hleb

Cech yourself before you wreck yourself.

That video will have more views than kim K’s sex tape the minute it gets out.

so that explains the dodgy back!

I see what you did there.

Help me
Reply to  arseblog

I don’t get it. Someone please help.

Cech yourself before you wreck yourself.

That’s great now do you think you can make some proper saves?

You Petr Cech yourself.

Me So Hornsey
Reply to  Dylan

I think you’ve just won the cech puns, i laghed out loud in work, hero!

He was probably creating soms sick ryhmes to come in his head when the goals went in. Pretty sure that was the last we saw him go all ‘szcz’ on us like that……

How fitting, an initiation rap, to compliment his debut of an imitation crap.

Joking aside West Ham was a rare blip, I am sure he’ll be great this season, looking forward to the big guy claiming the golden glove in May!

“Horse houses” are “stables” by the way Bloggs…;-)

Do you think he had crazy bars? Like the bar on his goal, geddit?

B3ing told about this, with no possibility of seeing it is pretty frustrating…Id rather not know tbh

We need that video leaked. If SZCZ was still around I’m sure he’d find a way of getting it to the papers.

They would be living in a dingy north London flat a la Richie and Eddie? Love it!

Will never support Cech. He is Chelsea to the bones, whatever supposedly likeable sideshow tricks he may turn. Another performance like last week’s and he should be benched.

Well you’re a great Arsenal fan aren’t you? Not supporting your own players (And Cech IS an Arsenal player right now whether you like it or not) is just pathetic in the extreme. Grow up.

clubs have been taking our best players for years, I for one am delighted to turn the tables

Nothing quite as sweet as an acoustic rendition of “Chupame Mama”

Also, who does Gibbs mean by Alex? Iwobi or Alexis?

Do you think Arsène has Flamzil in mind when keeping Flamini at the club? Mesut needs to be kept happy?

Hereford Gooner
Reply to  Per

King Henry the xiv
Reply to  Per

I doubt he does; anyone remember Cesc and Senderos? Bromance or not, Arsene got tired of Drogba making a fool of the big centre back and shipped him off!

With Flamster at £40k and Ozil at £140k i doubt think this 2 macericks compare paycheques when they go off together hehe..

Transcript…
Arsene Wenger they call him the professor,
Spanish Right back by the name of Hector,
Big Fuckin German the name he has? Per,
Cech 1-2 but Laurent is Faster.
Right in the middle like Coquelin
Wilshere in there with a broken Shin
Mesut and Santi got dancing feet
Sanchez runnin around like a little mosquit
Ooooo.. Giroud up top with his slick back hair
Walcott sprinting can they form a pair?
Brap in ya face..
I was there i heard it…

Keeper or GoonEr Now, this is a story all about how My life got flipped-turned upside down And I’d like to take a minute Just sit right there I’ll tell you how I became the keeper of a team called Goon-Er In west Smelly london bought and paid Stamford Bridge was where I spent most of my days Savin it maxin’ catchin’ all balls And all listening to mourinho with his ignorant calls When a new belgian keeper who was not great but good Started making trouble in my neighborhood I got benched for one little season and i got… Read more »

Bow Down – the Cech edition Tha world is mine Jose get back Dont fuck with my stack the gage is racked About to drop the bomb Iam tha motherfuckin Cech; Big fish in a small pond! Now tha chavs wanna throw the book at the crook But I shook their worm and their hook Cunts hold their breath they wanna miss me when Iam tipsey Runnin everything WEST of the Thames River Its the unseen pullin strings with my blacky helmet We got the shield so pucker up FO we march up the table Bow down before I make… Read more »

Honestly can’t imagine it being that good though can you? Yanawadaimean

Who is in the Flamini photo in the boat?

That is Princess Beatrice of York, with her boyfriend and someone who looks like Viggo Mortensen in the back.

Flamini is apparently good friends with her boyfriend Dave Clark and her.

Here is another file photo of Beatrice with Flamini from 2013.

ooh great have you any pictures of Kim Kardashian and Hector Bellerin – coz this is Hello Arsenal right?

Now Cech it, I got more mack than Hleb and in the bed, believe me sweetie I got enough to feed O’Leary.

who’s the “royalty” on the boat with flamini?

The woman in green is one of the queen’s granddaughters.

Any guesses as to what language Flamini and Ozil getting along so well in? Ozil- German, Turkish, Spanish, limited English,, Flamini- French, Italian, English,, maybe he speaks German?

Ozil’s English is better than you think. Here’s an interview he did, most of it in German, but at the beginning you can hear him speaking English with whoever the other guy is. It’s pretty good, and it was done two years ago.

Oops, link to the interview: https://www.youtube.com/watch?v=y-Z3UDwC9FU