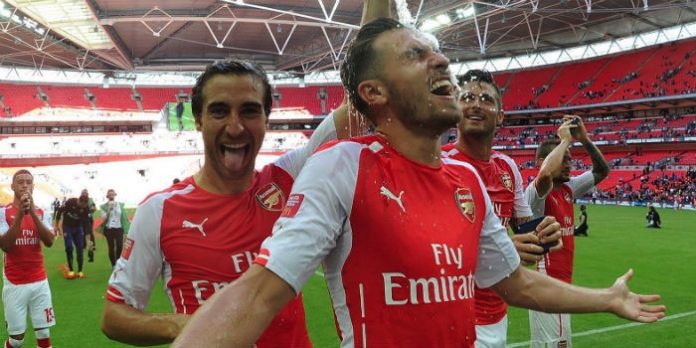 Reports this week suggested that Arsenal had point-blank told Mathieu Flamini that he should find a new club.

Today, Arsene Wenger dismissed them, saying the player wants to stay and that he expect him to be at the club after hte close of the transfer window.

Flamini rejoined the club in August 2013 after a spell in Italy with AC Milan, but having fallen down the pecking order since the emergence of Francis Coquelin, doubts have persisted over his future.

“I expect him to be here in September,” said Wenger.

“I spoke to him. At the moment he is not involved but he has no intention of leaving. He will be involved at some stage. He works very hard and his intention is to stay.”

The manager’s comments come on the back of Flamini’s summer declarations that he wanted to remain in North London.

“In football everything can move very easily one way and another,” he said.

“I don’t like to look back at the past. We are starting a new season and I’m focused on that one.

“I played a lot in the first part of the season and then I got injured in January and after that the team has been winning nearly every game, so it’s difficult to complain.

“Everything will be open and I will work hard to get my place back.”

As one half of top boyband FLAMZIL, it’ll be interesting to see if he can work his way back into first team contention, or if this is one of those classic ‘Andre Santos is important to us’ statements from the boss three days before selling a player.

Love the guy’s attitude, but he’s definitely one of the more up-gradable members of the squad…

Dont want to be harsh on flam as he did a good job on his first season. Last season not so much since coq is basically a younger better version of him.

Also still abit annoyed we didnt get Schneiderlin who would have easily replaced flam, he just completely bossed villa.

Schneiderlin did boss Villa yesterday, but he plays more similar to Ramsey than Coquelin. He plays more as a box-to-box rather than a true defensive midfielder.

- DFS
Reply to  An Ox-sized Coq

No he does not.

He is a defensive midfielder and self declares as one. The box to box midfielder was simply how many uninformed chose to cast him (I presume because he went to Man U).

As was pointed out in an article just yesterday related to Clasie his replacement being injured and Southampton suffering in midfield, for the last two campaigns Schneiderlin had but one assist per season, but the best tackling stats (Clasie is actualy more attacking).

He is one of the best defensive midfielders in the world and the one we should have bought.

How well the photo potrait the headline. Well done!

As long as he keeps Ozil happy…

I mean, he hasn’t been stellar, but whatever. Every team needs squad players. Especially Arsenal, given our horrendous injury record.

In fairness, we’re talking about a guy who has never been sold for a transfer price in his entire professional career.
Our Mathieu only seems to do Bosmans, and he’s not about to stop something so lucrative at this stage of his career.

Don’t know why you got a down vote…you’re dead right!

The Bosman King. Good on him.

He needs to fuck off from the club. Leicester signed Inler today, while Arsenal has this piece of rotten dead wood who does nothing but point and shout. You can’t be serious title contenders with Flamini type players in the rotation. People ragged on Denilson, but Flamini is even more inept.

Haha. He’s a bit better than you make out. Entertaining mini-rant anyway.

I do worry when he makes one of his (inevitable) sliding kung-fu tackles though.

He is getting a lot of money for doing nothing & now we are stuck with him.He is even preventing the arrival of new players.He looks at Rosisky(1yr extension), Arteta (1yr extension) & says why I can’t also finish my remaining 1yr.

It’s called a contract. That’s how contracts work, and the entire reason they exist.

It’s also the reason Arsenal has only offered shorter contracts to older players, only to get criticized up, down, and sideways for doing so.

Older players like paddy and Bobby not flamini
Don’t move the goalposts to make a point,you know why AFC were critized for good reason with treatment of older players

He should have been sold on the opening day of the window. we are selling the likes of Podolski but not him? It doesn’t make any sense. I would take the likes of Sandro and Jedinak over him. he has nothing else to offer the squad. every time he is on the pitch I feel like there is nobody on the center of the pitch protecting our defense. he just claps, shouts and gets booked. He will not be getting any sentiments from me, I see him as a liability. I would have thought were past the days we carried… Read more »

Sandro!? You must be joking.

may be not Sandro but Jedinak yes. I would prefer giving hayden a chance before I would consider playing flamini. should have been flamini sent out on loan even considering his age.

such a supportive lad, it’s breathtaking.

Me So Hornsey
Reply to  die hard gooner

I compel you to change your name after such an outrageous statement.

Even if it were true (which it isn’t), NEVER EVER EVER, prefer a Spud reject to one of our own in here.

die hard gooner
Reply to  Me So Hornsey

tell that to sol campbell he was an ex spud.

Not a reject though, was he?

He was the one who rejected.

I would have liked to run a poll to see who would take flamini on a free transfer and there wouldn’t be a fan of a premier league side that would take him. the championship may be.

Shame he didn’t have this attitude when it mattered.

no flam no party

who’s gonna do all the pointless shouting and pointing?

How can you possibly have pointless pointing? Surely the whole point of it is to have a point and the point im trying to make is that by not having a point, you couldn’t possibly point a pointy finger in a pointless way……..

I see your point. but this argument may ultimately prove to be pointless.

The flam wages are almost worth it to keep Özil happy.

he’s there to party with özil and wingman him since not many girls seem interested in Nemo.

If he wants to remain in North London then send him to the Spuds.

Really?
Is this really the shit attitude we have toward players who have worked hard for the club?

He is obviously not the future, but he signed a contract and is entitled to those protections like anyone else and he did a job when we were really in need.

What is all the fuss about? Flamini will play about as much as Rosicky did for us last season. He seems to be good in the dressing room and he’s keeping Ozil happy. Yes, 65k is alot for just that, but good negotiating on his part. No one put a gun to Arsene’s head aka Theo style to give him that money. Coq is our CDM. Arteta is his cover and Flamini will get the odd game or two whenever those two are not fit at the same time. What’s the big deal with that?

Did you say this about Squillaci? Flamini offers absolutely nothing; he takes a valuable spot in the squad and wages that could be used for a better player.

And this time round I couldn’t care less, ah the circle of life.