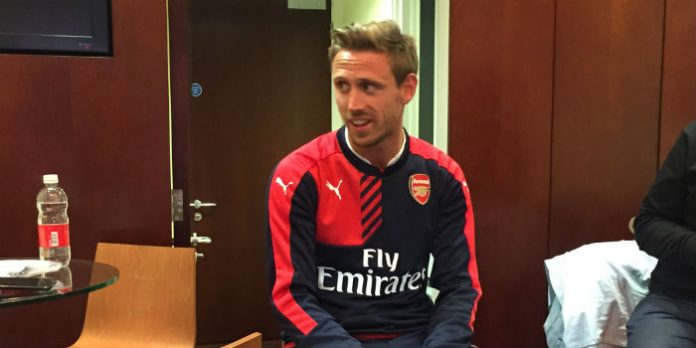 Nacho Monreal has established himself as the first choice left back over the last 12 months, leapfrogging Kieran Gibbs.

The Spanish international, who signed from Malaga in January 2013, has been impressive, but talk of a new deal was shot down by Arsene Wenger today.

Asked by Sky’s reporter if rumours of a new deal were true, Wenger said, “No.”

Pressed further about if one was forthcoming, he replied, “I’m happy with his performances but at the moment we are not in negotiations for a new contract.”

While Transfermarkt says that the 29 year old has a contract until June 2017, they’re certainly not infallible, and we have our suspicions that the deal could actually run out in 2016 – hence the amount of chatter about his future.

Earlier in the summer Monreal was linked strongly with a move to Athletic Bilbao, and the Basque club have gone on record as saying he’s a player that interests them.

Then again, if he does have a contract until 2017, you can understand why the club are reluctant to offer new terms at this point – preferring to wait until next summer when his performances and consistency might be the driving force behind a fresh offer.

We’ll see what we can find out.

Non-story in this case perhaps? I like Monreal and the boss is clear too it seems. I’m not sure Arsene doesn’t feel there could be room for improvement in that department still, in the medium-term.

Need to lock him down and put this speculation to bed – last season he was fantastic.

If you lock down Coq after one good season surely you’ve got to do the same with Nacho.

Agree he was a stalwart for us, but I’m also sure Coq was on a much smaller contract, so more reason to up it.

If his contract does run until 2017, at 29, there is absolutely no need to renew this summer. Especially in a position that is so demanding physically. Best to see how he does this year, and I’m sure Wenger will have the analysts shed light on his physical condition over the year.

I believe there is the option of a years extension on his contract, hence the confusion of when his contract ends

Yeah, he was very good for us last season and put in some great performances, but given his age and – let’s face it – we can probably do better in that position in a couple of years time. It’s probably a case of winding his contract down, by that time Gibbs will (hopefully) continue to improve and then Nacho can be replaced with someone up and coming?

Who knows, but it wouldn’t be the most illogical thing to do.

If it is 2017 then this is not even news. The lads playing well, hes clearly established as our first choice when bellerins fit too, because its the perfect balance that we like to see, one wing back bombing forward the other more defensive minded, agreed with arseblog about last wkd that gibbs should be playing with debuchy to get that same link up. But will be glad to see monreal have another solid season this year and then we can worry about contract extensions. Left back isnt exactly a position we’ve been short of talent over the years. Andrè… Read more »

I would Santos had a moment rather than moments.. I truthfully only remember one good game he had early with us.

But on topic, Monreal has done very little wrong. It’d be nice to keep him around for a few years anyway!

He’s not injury prone enough to be tied down to a new deal.

If was apparently a 4 and a half year contract he signed in Jan 2013 so should run out at the end of next season in that case.

It still freaks me out how much he looks like Peter Crouch.