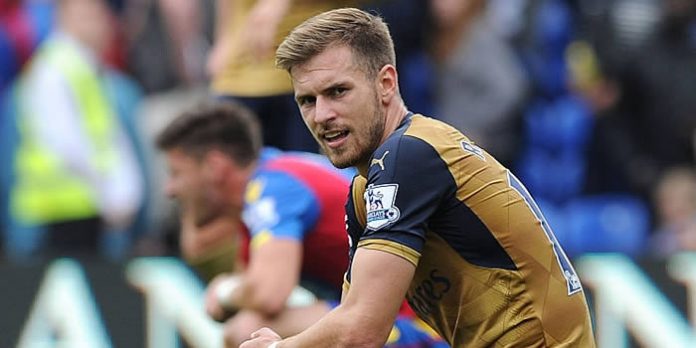 Playing a central midfielder out wide usually means a team lacks width, as their tendency is to come back inside more often than note.

However, that’s exactly what Arsene Wenger wanted from Aaron Ramsey yesterday as he shifted his team selection to accommodate the returning Alexis Sanchez.

Pre-game there was a lot of discussion about whether or not Alex Oxlade-Chamberlain should have started over the Welshman, but Ramsey was solid, and probably should have got himself on the score-sheet with some excellent movement from midfield into the Palace penalty area – his runs often un-tracked by their defenders and midfielders.

“It was the manager’s decision and he tweaked things,” he told Arsenal Player.

“He told me to try and get in between the lines, not stay outside, to come inside and I thought I did that by getting into some dangerous positions. Some of the combination play was really good and on another day we could’ve scored more.

“We played really well, got into some dangerous positions in between the lines and on another day we could have scored a few more. Even though we conceded we never questioned our ability to go on and score again.

“I had a couple of chances and maybe on another day they would’ve gone in. I’m just happy for the team, for Olivier to get his goal and to get the win.”

Me So Hornsey
Reply to  Fuj

You’re all forgetting the pioneer and most talented of the Wenger wide midfielder.

Can’t wait for when this “another day” comes round.

Save your another day, we need you to score on every match day where it matters

A goal every game then. Seems reasonable.

40 of these babies, thanks. And make sure you do it twice against Chelsea, Ramsey.

I can not and will never forget that Fa cup winner and just hope its one
of many a dozen unforgettable memories you provide to the Gooners..
In India, “Ram-sey” translates to “God-like” and I hope you translate your mega potential to mega performances.. and tha too week in week out..
COYG

Well he is the welsh jesus…… so its as close to god as he can get!

Both Bobby & Freddie had success doing this. Think Rambo is more of a Ljungberg type. Hope he can replicate his success.

Trouble is, him coming inside is leaving our right flank exposed and Bellerin having to cover a lot of ground if Ramsey doesn’t get across quick enough. It was notable yesterday when the Ox came on the right flank had more cover and pace on the break. I’m not criticising persay, but we should pace on the wing, not just the energy that Ramsey provides. He really should be playing centrally, but who can you drop?

How long have you been watching arsenal. Arsene very rarely play with two out n out wingers.

I’m not saying he does. I’m saying he should. Alexis tracks back exceptionally well from the left. If we can get the Ox to do so, we’ll have so much pace on the break and be able to defend with more balance.

If we have too much pace on both side, they simply sits deeper. Its better to have 2 different options.

I thought the Coq tended to drift towards the right more, with one of Santi/Rambo dropping a little deeper to help cover the middle when needed, it looked like a tactical thing and it mostly worked imo.

Both Ramsey and the Ox need to up their defnsive game. It went without comment yesterday but Ramsey contributed to their goal as much as any of our players. He committed himself to a tackle he was never going to make on Puncheon which gave him all the time in the world to get his head up and play the ball to the edge of our box. The Ox came on and showed us his defensive flaws when it took a lack of confidence from their player and a late Arteta intervention to deny Palace a shot on goal. This… Read more »

Actually, having Ramsey explain the ‘tactic’ just fills me with dread. So it came off to some degree, but left the right flank exposed for the majority of the game, additionally providing little or no thrust down the right (it now looks like Bolasie was yanked not due to injury but agitating for a transfer which we could not have known about). Further, as I pointed out yesterday, the winning goal scored came from a cross (Sanchez, the own goal) after Ramsey had a spell of actually staying at right wing and protecting the right flank. It was one of… Read more »

Jose;- ‘certain clubs stick to their managers even when they don’t do tactics’.

“And on another day…”

Ramsey playing wide right is better with Bellerin behind him as it gives him more freedom to come inside and leave the wide channel to Bellerin. When Walcott plays wide he tends to stay wider more of the time and when Sagna was behind him for many years they’d clog the space together. Walcott has not played wide right much with Bellerin in the lineup yet so will be interesting to see when he does how that works. I know Ramsey wants to play in the middle, but most will agree Carzola is a better fit with Coquelin playing centrally… Read more »

This mans engine boggles the mind.

Seen “Maybe on another day” three times in this short article…Hope that another day come soon and more often. COYG

Very similar to the tactics employed when Marc Overmars played left and Ray ‘Romford Pele’ Parlour would come in from the right to stiffen the midfield.No tactics….. eat you heart out Mourinho you cunt !!

Brilliant we just gotta get the FA to schedule our games on another day and the title is in the bag!

Rambo was better this week than last week but he still tries too many flicks for me. Hope we see 2013/2014 Ramsey again soon

Olivier too. Too many back heels and flicks, even when he is through and has time to do something more calculated!

I’ve said it often when a certain player is played to the left or right of our midfield and people say ‘I can’t believe AW is playing Ramsey/Ozil/Cazorla etc on the wing – they aren’t wingers and it’s square pegs in round holes from an incompetent manager who doesn’t do tactics” – I’ve said it often that people are really talking out out their ass and actually are the ones who and rent new stuck incompetent and rent new certain era where everyone played 4-4-2 and teams had 2 wingers and 2 cental forwards. We don’t play that way and… Read more »

tactical genius that failed to win any major titles for the last 11 years? This is 2015 catch up…

I think the lack of titles is more due to lack of money to buy necessary talent to compete..

our finishing was dreadful
otherwise we could have scored 4 or 5 to palaces 1. off the back of my head I remember Alexis missing to great chances and Ramsey shooting over the bar from Ozils clipped pass. OT Real Madrid just signed Kovacic so Illaramendi or Lucas Silva may be available. A loan signing for either of them would be a solid if unspectacular solution for our defensive midfield headache. we could rotate the with le coq. I wouldn’t mind signing either of them permanently though.

Everyone misses more chances than they score. You try and find a player with a chance conversion rate of higher than 50%, Messi’s is only about 35 so good luck. All that matters is that you convert enough to win the game, which we did. So for now, who cares.

Ramsey played the wide forward role almost perfectly yesterday and was involved with most of our attacking play. At one point he drifted into an unmarked position left of the 6 yard box and would have got a tap in had Sanchez crossed instead of shot from the tightest of angles. Although i’m not too keen on the amount of pressure we put on Bellerin to be a one man right side, however he is doing an admirable job. I wonder whether we could go back to an Arteta/Ramsey pivot when we know we’re going to control the game(Have more… Read more »

So. We drop our form player of the new season (ox) for a flicks and tricks merchant who, admittedly on his day, is a world class attacking force but lacks both the tactical and technical nous to give confidence to a team defending a lead. And this coming from a man who strenuously defended rambo during the dark days. You know, how about we played our form player as a means of relieving pressure on the wing and adding to our attack. Ramsey strikes me as trying too hard to impress, keep his place in a team full of attacking… Read more »

I love the ox but you saw his howler vs west ham, yes? Has to be punished but of course he’s hellla exciting this year. And we won. Which means that arsene knows.

Sorry, this sounds like someone had to explain why the right flank was left exposed most of the game (and I called that perhaps Ramsey had been given free rein to run anywhere).

With Zaha and Bolasie (who had to be subbed as he is not fully fit) on the wings, this was a risk as Bellerin was left with no cover and as I said yesterday and either Coquelin or Cazorla were dragged wider to cover th gap Ramsey left.

I was annoyed that Ox/Walcott didn’t get the start but you cannot say it was not the right decision or that it failed during the game.. Ramsey did get into extremely dangerous positions he just did not finish his chances on the day and was a little bit poor in possession.

The problem is Wenger is not very proactive…The moment it went 2-1 Coq should have come off for the Ox and Ramsey take Coqs position, where he can be disciplined if instructed to be.

Hard fought 3 points. The team will have to be more clinical to get points in this league. All teams have improved and there won’t be easy matches. COYG!! now let do the Mugmashers…

My problem with Ramsey is that when he plays he is SO involved in the game, that the performance of the team hinges on how well or badly he plays…if that makes sense?

With Bellerin outside him it allows Rambo to wander infield. With the formation we are playing I think he’s our best option there, hard to mark moving out to in and he’s a goal threat. Keeping Santi in the central role is absolutely key

He played well and got into good positions but too many plays ended with his touch and ball going out of play or turnover. As he said in the IV, on another day he buries one of those chances. As for playing Rambo more centrally, Cazorla has really made that position his own now. Ramsey is being accommodated by the manager atm and if we keep winning, a drifting inwards winger he’ll have to be.