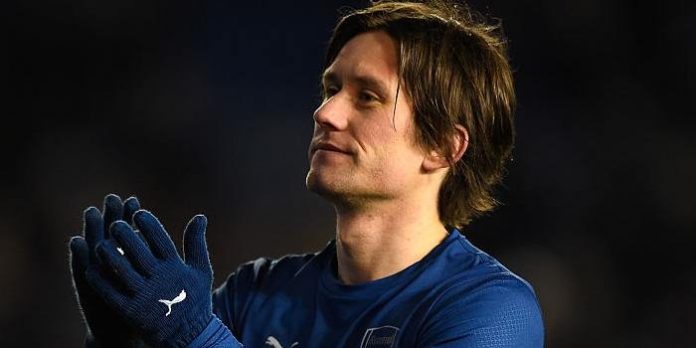 Yesterday news broke that Tomas Rosicky would miss ‘one to two months’ after undergoing surgery on his right knee.

However, in his latest team news bulletin, Arsene Wenger has confirmed the operation but said the recovery time would be longer than reported.

“Tomas has had surgery on his knee,” he said. “His agent said he will be out for one or two months, but it will be longer. How long exactly, we don’t know yet.”

Arsenal took up the option to extend the contract of the Czech international who signed from Borussia Dortmund in the summer of 2006.

Although it felt like he featured very little last season, he made 24 appearances, scoring three goals. He was always going to be someone who added depth rather than a first team regular, but once more the injury problems that have plagued his Arsenal career have struck again.

Actually Welbeck and Rosicky were injured throughout the preseason. And Wilshere got injured before the game. So its
0 game played.
3 players injured.
Now thats the ARSENAL way.

The Arsenal way is to get injured on national team duty or in training as Rosicky and Wilshere did.

Wenger kept him on the fringes of the 1st team last season it feels like 2 years since TOMAS properly played for us. Needless to say one more midfield injury and “Flamzil” might just be reunited on the pitch.

Well, hopefully a full recovery, and an end of season run leading up to the league trophy to finish his last year. Here’s to a sooner-than-later return!

I still dont get why it took this long to get him under the knife. Surely he could of had surgery when the injury was first picked up after the international rounds. He could be well into his recovery already… so sad we wont get to see his magic for the start of this season

Could it be possible that when Arsenal picked up the option in his contract, the club (or at least AW) knew about this issue, i.e., that he was due an operation which would sideline him for a long time? The reason for picking up the contract option was perhaps a nice thing to do for him, ala Diaby, because he might never have cleared a medical when signing for a new club?

Just a litle, albeit positive, conspiracy theory on an awful Thursday in Reykjavik.

Now that I think about it… Maybe Wenger decided to extend the contract so that the club would help him with this surgery/recovery? TR7 would have probably failed any medical, would be club less and forced to premature retirement. AW is such a caring manager, we are lucky to have him.

Which in no way explains why Rosicky was kept on the subs bench for almost the entire previous season when other players could have been given a needed break, and he was carrying no injury.

There’s a weird hoarding at of fringe players at Arsenal who are given little first team opportunity, but not allowed to leave and further their careers. That debate can be held regarding Rosicky, Campbell and Silva at the moment.

Arsene deftly putting Rosicky’s agent where he belongs. It is not his duty to put a timescale on his injury.

My favorite Gunner and footballer of all time. Gutted.
However, I’d wager the chances he plays for Arsenal again are now slim.

seemed kind of weird move to (unilaterally) extend his contract at the time.

and going by reports, he wasn’t exactly delighted to stay…

Yes we should have done…

There was something really odd with the entire Schneiderlin affair that went under the radar as it was so early in the window. The only report I have seen (unverified) claimed the idea of Schneiderlin coming to Arsenal – after most thinking it was a done deal- was dismissed out of hand to the point of being offensive, any talks breaking down as soon as starting.

shoulda bought messi…… oh and his kid too, He’s so cute

Are there going to be good news at all this week from Arsenal? One week of my life spent in hurt and sadness because our players were ‘nervy’ and ‘ill-prepared’ to face West-Ham!!! To top it all, our favourite Mozart is being sidelined for longer period. What a week!

It would feel strange without them now.

It hurts to say it but this has to be Rosicky’s last season with us.

Could’ve done with his spark and enthusiasm against the Irons!

TOTALLY OFF TOPIC: I am sorry, I can’t be arsed to register on the main website. I wanted to acknowledge Tim Stillman @stillberto ‘s excellent and always thought provoking columns. Again today, he has pointed out something that was visible in the game against West Ham. Read the column for the details, but essentially, the question boils down to this: who partners Coquelin in the center? Ramsey or Cazorla? For me, it is an absolute no-brainer. At this point, Cazorla is the man with the better skills, better game intelligence, and better ability to play that role. Player power at… Read more »