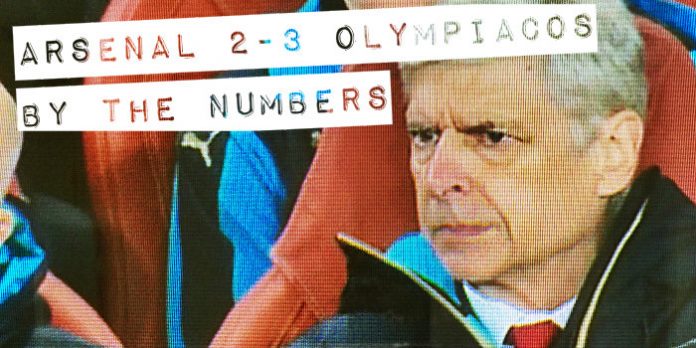 Arsenal’s first two shots were from counters. The first off a corner, the second off a set play. That seemed to be the desired attack for the first 20 minutes but after that Arsenal applied the handbrake and ended the half with just 3 shots, one for Walcott’s goal.

The announcers here in the States were raving about Olympiacos but the truth is that Arsenal were doing exactly what the Professor ordered: forcing Olympiacos into shots from distance and being patient attack. All of the Greek team’s fire* came from outside the box while all of Arsenal’s shots were inside the box in great areas. It drives people crazy and I understand why but Wenger is playing the percentages with this style of play.

1 – A deflected shot from distance — this is why long shots are low percentage and also why people love to see them (if you’re on the scoring end)
2 – An own goal — that kills your team and we will talk about that in a second
3 – A terrible lapse in concentration — people make physical errors like the first two goals, but when a group of professional athletes makes mental errors like the one which led to the third goal it steams my humbow. That undid all of the hard work that players like Alexis did in that game and is very difficult to take for the fans as well.

Errors as used here are specific events recorded by Opta and I’m using Opta’s data here to give you these stats. They don’t give an official definition of what an error is but I can tell you that it’s not just any errant pass. It’s usually an errant pass, bad dribble, or some other catastrophically bad event which leads to a shot or in the case of this post, to a goal.

To give Arsenal’s record some context: in all 38 League games last season, Arsenal had 8 errors for goals and 2 red cards, with just 1 own goal. But, critically, 7 of those error-goals, the 1 own goal, and both of the red cards came before January. Arsenal played 18 matches after January 1st (not inclusive!), winning 13, drawing 3, and losing 2 while making just 1 total errors for goals and having no players sent off. And if you include the FA Cup run, Arsenal also made zero errors, allowed zero own goals, and had zero players sent off.

If Arsenal had 11 “events” (errors for goals, own goals, and red cards) in 18 games last season, they already have 7 in the first 10 this season.

What happened? I don’t know but it’s an annoying pattern now.

It was good to see Coquelin back bossing the midfield. He looked energetic and feisty. He only misplaced 3/39 passes and did his normal job breaking up play. But it was Alexis delivering on both ends of the pitch which was truly magical.

What more does he need to do??? Maybe he needs to put the gloves on for corners?

Class? Pay attention. Please read this paper proving, scientifically, that Mike Dean is a Wanker. I will be expecting a full report in the morning.

@7amkickoff I have extended your analysis on @Arsenal vs. Mike Dean here: http://t.co/WwkC0uQwPv

Thanks for helping me understand why I’m so mad. Love reading what you write, 7.

Funny how both our keepers (Woj and Ospina) made terrible mistakes yesterday.

I also felt Sanchez’ 6.5 was unmerited, thought he deserved higher because he seemed to be the only one who could make anything happen for us yesterday.

I swear that even if we put a psychic Gianluigi Buffon who has never made a mistake in over a thousand years in goal, we will still concede thanks to goalkeeping errors

Sanchez definitely deserved at least 8.5; was one of the best, if not the best performance I’ve seen from him. He beat opponents for fun. Scored a goal, set up great opportunities. He was on fire! Just a pity he can’t do it alone… The rest of the team, apart from Ozil were half asleep. Also, Theo has got to improve, or learn how to shoot. At the moment, his shots are lifeless. He needs to add that art, that venom into his shots. At the moment it’s “goal opportunity, kick.”… That’s not good enough to be the striker of… Read more »

From the invincibles to this…yep. :/

We are actually going back in time to pre-Invincibles. Back then it was just us and United in the CL and we always struggled.

Tim, as infuriating as these stupid errors and losses are, your statistical insight always encourages me that there is a method to the madness in the way we play.

Wenger may or may not be the best person for the job, but suggesting that he is an idiot is idiotic.

3-Goals conceded by arsenal against teams that should have been beaten-Anderlecth,Monaco and Olympiakos.

“Arsenal can still qualify – we just have to get a result at Bayern”
That is what he said.
Proves what a deluded fool he is.
Arsenal are finished again in the CL.
You pick your best players surely if you want to win games.
But when you have no pressure to succeed and no chance of being fired then you don’t care.
Arsenal have zero ambition…

Well, I guess for a change it’ll be Olympiakos instead of us who get knocked out in the R16. I mean, come on guys, let’s not get carried away. We’re never going to win this competition. It’s all about getting into the group stages, grabbing some cash, and using Europe to attract signings.

I mean, if we make signings. Which we don’t.

So…remind me of the point, again?

You’ve gotta be in it, to not try and win it!

Until we stop believing we have a divine right to win games we will get fuck all.
We have pace but don’t play with pace and it was only in the last 15 minutes when it is to late we looked interested

How many errors by Oxlade have resulted in game-losing consequences.
Quite a number.
Sometimes he appears a dream
Other times a disaster.

As regards the team as a whole, I doubt we would ever win UCL under AW era.

Bayern will definitely hammer us home and away.

I call this “Learned Helplessness ”

I actually think we deserve better.

We need a world class manager. Wenger’s days are over. Hey Arsenal Fans, haven’t 10 years of THIS been enough, or should we get Wenger a 10-year contract so as to win some domestic cup again? Maybe he will manage to have a full squad of 5’10” players, including a short keeper like Ospina!
Oh, of course we all will say we are contenders for something when we beat some poor side like Stoke or Leicester again…..

See this is the sort of comment I hate. 10 years this 10 years that. No, not 10 years, you think watching & supporting Arsenal during the restricted times were hard? Imagine walking onto the training field and seeing your options as Silvestre, Squillaci, Adebayor etc etc when a few years previous it was the invincibles you could choose from. Wenger had to manage us through those difficult times which he done incredibly, but now that the limitations are gone things have to change. How many times have we seen last nights game happen? 5-7 years ago kind of acceptable… Read more »

As you say though, doesn’t solve the fact that Wenger is unable to iron out the retard factor in the team.

the problem is that things didnt change even after the limitations were gone, when not only fans but everyone else says you need a new centre half, holding midfielder and a world class striker and a director comes out and says the money is there please go and spend it, and what you do is get a keeper and that is it then maybe it is time to go, when the manager just wont buy players because he still believes that the ones he has bought previously will bring him the title and everyone else says they wont and it… Read more »

Time to bring back Eboué!

When you see goals like the one Alexis scored…you can’t but love Arsenal and be proud as a fan..its moments of brilliance like that from the team that keeps us loving the team.. COYG

By god the errors are annoying, last night we expected to win, the problem I think. Wish we didn’t make them in the difficult games as well. Would also like to communicate my excitement about Andy Field blogging on the Arse. Was my lecturer 10 years ago and brilliant, now I recommend his textbook to all of my students. Little would excite me more than a 7am Field collaboration on some Arsenal statting

Very good article as always Tim. Oh and congratulations to you and Les, I see that your David Rocastle piece on 7amkickoff.com is featured in the official Arsenal website.

Just out of curiosity: How many chances did we have/miss yesterday? I know we were undone by defensive errors, but I feel we could (should?) have scored 5+ goals with all the chances we had. We were bombarding them at times, and yet again we made their goal keeper appear as if he’s suddenly Buffon in his prime. Looking at our bench last night, I actually found myself missing Poldi, as he offered a genuine goal scoring threat as something of an impact sub (a role he was not happy with, I know). Our shooting is flat out rubbish at… Read more »

We are pointless in UCL. Literally.

We used to be in ULC quaterfinals with Eboué, Denilson and Djourou. What is going on ?