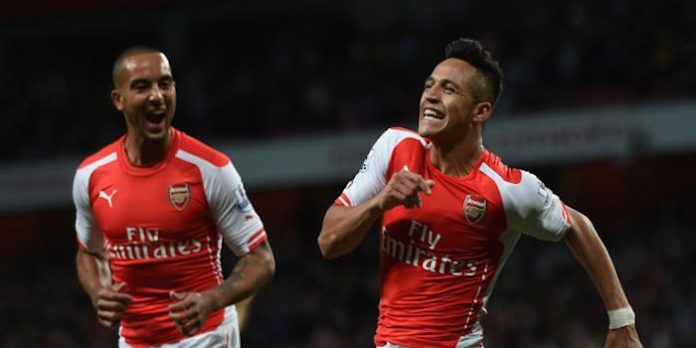 Arsene Wenger says he’s confident that Olivier Giroud, Alexis Sanchez and Theo Walcott can score the bulk of the goals Arsenal need this season, with more coming from the midfielders.

In the absence of a major investment in the forward positions, the boss is looking for his team to share the goalscoring burden – suggesting this is more beneficial than being reliant on one man to be the main threat.

“We will have to spread the goals through the squad,” he said. “I think Giroud, Walcott and Alexis can get around 20 goals without any problem.

“Sometimes you have to trust your players and play them. Then they get there. People always want the absolute certainty that they will be absolutely successful. It is not like that.”

And speaking about the contribution from other players, he continued, “I would rather have Ramsey 15, Ozil 15, Cazorla 10.

“Otherwise, if you have only one player who scores, when he is injured you don’t know who will score.”

It does make sense on one level of course, but it’s hard to remember a season when Arsenal have had three 20 goal a season players, backed up with double figures from three midfielders.

Nonetheless, that’s pretty much what’s required if the team is to challenge for the title this season, so fingers crossed.

Indeed, that’s all Wenger ever does. Makes you wonder what he does for his salary.

Thank heavens for “own goal”,
hmm, was that Wenger was on about when he was talking about getting a striker from heaven?

Walcott playin through the middle will get more than 20. Doubt Giroud will even get 20 this season cos of all the talk about a striker this summer and gettin booed because that will always play in his mind when he’s havin a bad game which he mostly does for me anyway. Too sensitive and lacks that killer instinct.

Giroud has always played well after talk of a new striker.

Christ, that sounds like some nonsensical the pie in the sky figures you’d expect some deluded fans on a football forum to come out with, not the manager of your team. Might as well have said he expects Ox to win the golden boot while he was at it.

It really isn’t. These are tallies that the mentioned players have all hit in previous seasons so it is quite a reasonable thing to say and expect. Ozil might be the most unlikely to hit that target as he’s rarely inclined to shoot, but the rest are all easily capable.

Sure! Double digit penalties and he’s there.

If you’d processed what he said, properly, he didn’t say it like that at all. He was talking from an “ideal world” perspective.

I don’t understand all the negativity some have towards Giroud right now. Walcott hasn’t fit well as the front man (yet) and we run much more smoothly as a unit with Giroud up front. He is vital to the quick link up play that we enjoy up front. I think he is by far our best option.

And you don’t think that’s worth crying about?
“Giroud is, by far, our best option”

Giroud’s the most predictable striker there is. All he does is one, twos which sometimes come off but most of the time don’t. Can’t run behind, can’t create chances for himself cos he’s not quick enough, can’t dribble, can’t pass either cos he loses the ball so many times. Much more effective havin theo and alexis makin the runs with Ozil and Cazorla feedin them balls and forcing play.

Actually he passes very well, and some of his weighted lay-offs are superb. No wonder you said (supra uide) “when he’s havin [sic] a bad game which he mostly does for me anyway”, you’re clearly watching someone, some other HFB, else.

Look at his passing percentage and tell me he’s a good passer.

How is Walcott supposed to get 20 goals? I’m not saying he’s not capable, but he’s behind just about everyone in the pecking order on the right hand side, and I highly doubt the occasional game up front is going to get him that many goals.

Wow, easy with all the positivity. Imagine if the fans gave boosts to the squad instead of using every opportunity to tell them what big cunts they are! I hear Dortmund is nice this time of the year.

*this figure does not include Piers Morgan as I choose to reject his apparent fan status. He’s also a massive bell.

…might be harder trying to convince the Die Borussen to convert to Red than getting Piers Morgan to realise he’s a bobbleheaded wank factory* but I’m sure one Santi smile, one Mesut flick or the glorious sight of Artetas unfathomable locks would do the trick.

*sorry I really hate that mug

It’s very predictable what will happen: Giroud – Good, not great. Best Centre Forward option we have by far. Will return between 14-18 premier league goals. Walcott – Just not a player who can play on his own up front (See: Podolski, Lukas). Will be used mainly as a sub, score around 10 league goals, none of any importance. Sanchez: 15-20 league goals, he won’t even play up front. We’re so lucky to have him. A genuine world class player. Ramsey from 13/14: Outstanding player, 10-15 goals. Ramsey from then till now: 5 goals, a talented square trying to fit… Read more »

EVERY prem goal scored is important, just refer to your summary to see my point 😉

It would be nice, but that’s not what will happen. So far, in 4 league games, Cazorla, Ozil and Ramsey have made a combined total of 40 key passes. (10 per game, from just these 3 players) None of the other midfields in the BPL comes close to those figures. It’s incredible if you think about it. All we have to do is keep doing what we’ve been doing so far and we’ll get there. We have been abnormally wasteful these last few games, but that’s just a phase that we will play out of sooner or later.

Ramsey and Giroud had better get their shit wired tight quick goals-wise, or they’re getting fucked out of my fantasy team, that’s for sure. They’ve been warned..

Giroud must be quivering in his designer boots right about now

lets fuckin hope so it starts today against stoke. COYG

Let’s just leave Olivier alone. Let the man do his thing and let’s just get behind the team and remember; this is our squad, these are the players we support for the season, and these players are Arsenal players. Come on lads! Just do your absolute best for my club and you have my vote. Let’s fuck the orks…

They won’t score 20 a season because the tactics are too one-dimensional.

Now we will expect our players to randomly shoot to goal to meet their KPI. 😀

What abt our top scorer for the season – Mr OG?

If he’s talking in all competition, then maybe, just maybe its possible. But in the league, i’m sorry Alexis is the one that MIGHT be able to get 20 in the league…Walcott and Giroud will at best get you 15-17. Like blogs said, i can’t remember the last time we’ve had more than one play score 20 or more in all competition. Wenger can’t tell me he’s all of a sudden forgotten what a world class 30 goal a season world class striker has done for us. Without Van cunt, we probably would’ve come 7th and no need to talk… Read more »

We could quite easily go second today – keep the faith chaps please!

Greedy Giroud hogging all the goal this season.

Tbh, it’s not the quality of our forwards I’m worried about, it’s our style of play. We’re passing the ball so slowly at the moment and apart from Walcott, the movement is non-existent. Combine that with no pressure on the ball and, well, we just look a little ‘meh’.

Would love to see Ozil score more, but he hardly shoots, just too unselfish. He easily could score double figures in goals if he would look to shoot a couple more times a match. In my opinion Walcott could score the most playing out wide right off of Giroud than he can as a central striker. Just doesn’t get the ball enough centrally in positions where he can shoot. Someone who has the potential to score a number of goals should he get consistent playing time is Chamberlin. Has all the tools (strong shot with either foot, confidence to shoot,… Read more »