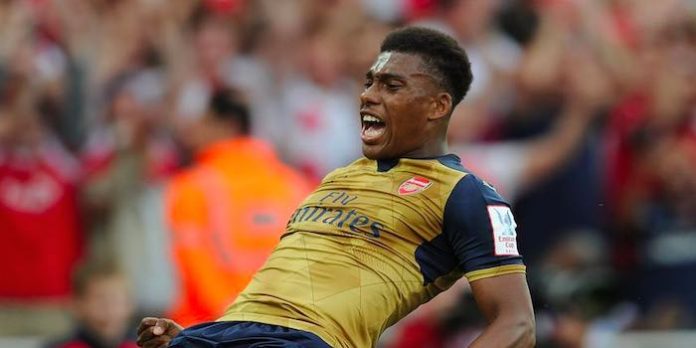 Arsenal have announced that Alex Iwobi has signed a new long-term deal with the club.

The 19 year old played a part in the pre-season build-up, travelling to the far-east and scoring in the Emirates Cup.

Iwobi is currently away on international duty with Nigeria, as talk about a possible loan move for him this season continues. Like Chuba Akpom he’s at a stage where he needs first team football in order to develop further.

So, good news for Iwobi, who really does look an exciting talent. Let’s hope he’s got lots of good years ahead of him at Arsenal.

I like this kid. His face when he scored in the Emirates cup was priceless
Sanchez and ozil next please boss

Can’t wait to see more of him and the jeff in the future,promising talents

Exceptional talents will grown at home, which frees funds to sign geniuses…, messi to arsenal when he is 29…? Who knows. ..

The guy has talent but his barnet is shocking. When Beckham had a mahican, Ferguson would not let him play as he was a poor ambassador for the club….Wenger needs to have a word with him!

I was woebegone at the thought of Iwobi gone,
but iwobi goin’ anywhere…(:p={ }

Help me Alex Iwobi…you’re my only hope.

Arsenal has acted just as smart as Nigeria in securing the long term services of this very talented young man and to that I doff my hat for them.

Out of all the players I was expecting to show their quality in the pre season he really wasn’t on my radar but by the end of it I was singing his name as we trounced lyon! He’s got some great athletic qualities and seems a very committed, determined and humble young man! Keep it up Alex!

Hoping for a bright prospect to be a future first team regular!

Congrats to Alex! But please don’t allow dat Naija mentality of hveing arrived, pigheaded disposition bcos ua an Arsenal becloud ur person; now is tym to be humble, bend backward nd learn as much as possible frm coach nd senior players in d team; neva be shy to ask, act nd obey everyone, hardwork neva kills it only increases ur confidence, knowledge nd finess!a word for d wise so u can become a tru professional!

Legible text minus tedious text-speak never killed anyone either.

Alex, for Wenger to hve u in Arsenal is indicative dat u hve talent nd potential,d4,humility is ur weapon to succeed at Arsenal coupled wit ‘real’hardwork, den sumday u can become a Ronaldo,Lewandoski, Messi,Ozil, Neymer, Bale,Alexis,et al!

My eyes…..Wont you please think of my eyes.

Aside from the horrible text speak and criminal spelling, I’m not sure how I feel about humility in players. Most modern greats are kind of dicks. I know it’s nicer to support a friendly group, but we need a bit of a dick (aside from our Coq). Not really going anywhere with this. I’m sure Iwobi is bloody lovely though.

He’s really saying sumtin! Although I don’t understand what.

His first name is Alex, so anything in between Chambo and Sanchez should be enough..